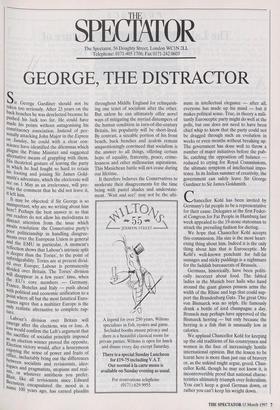 Sir George Gardiner should not be taken too seriously. After 23 years on the back benches he was deselected because he Pushed his luck too far. He could have made his points without antagonising his constituency association. Instead of per- sonally attacking John Major in the Express on Sunday, he could with a clear con- science have identified the dilemmas which plague the Prime Minister and suggested alternative means of grappling with them. Its theatrical gesture of leaving the party in which he had fought so hard to retain his footing and joining Sir James Gold- smith's adventure, which the electorate will see on 1 May as an irrelevance, will pro- voke the comment that he did not leave it, it left him. It may be objected: if Sir George is so unimportant, why are we writing about him here? Perhaps the best answer is: so that our readers do not allow his melodrama to distract attention from the issue which awaits resolution: the Conservative party's Poor politicianship in handling disagree- 'tents over the European Union in general and the EMU in particular. A moment's reflection shows that Labour's intrinsic split is deeper than the Tories', to the point of unbridgeability. Tories are at present divid- ed over Europe; Labour is permanently divided over Britain. The Tories' division will disappear in a few years' time, when the EU's core members — Germany, France, Benelux and Italy — push ahead With political and economic unification to a Point where all but the most fanatical Euro- manes agree that a multitier Europe is the only realistic alternative to complete rup- ture.

Labour's division over Britain will

loss after the elections, win or lose. A loss would confirm the Left's argument that the sacrifice of socialist principle imposed as an election winner proved the opposite. Election victory would, after a honeymoon enjoying the sense of power and fruits of .office, ineluctably bring out the differences ibetWeen socialists and revisionists, ideo- !Vies and pragmatists, utopians and real- ists, or whatever antithesis you prefer. Blair, like all revisionists since Edward Bernstein encapsulated the mood in a name 100 years ago, has earned plaudits

throughout Middle England for relinquish- ing one tenet of socialism after the other. But unless he can ultimately offer novel ways of mitigating the myriad distempers of the human condition in turn-of-the-century Britain, his popularity will be short-lived. By contrast, a sizeable portion of his front bench, back benches and zealots remain unquestioningly convinced that socialism is the answer to all things, offering certain hope of equality, fraternity, peace, crime- lessness and other millenarian aspirations. This Manichean battle will not cease during our lifetime.

It therefore behoves the Conservatives to moderate their disagreements for the time being with pastel shades and understate- ment. 'Wait and see!' may not be the ulti-

mate in intellectual elegance — after all, everyone has made up his mind — but it makes political sense. True, in theory a mili- tantly Eurosceptic party might do well at the polls, but one does not need to have been chief whip to know that the party could not be dragged through such an evolution in weeks or even months without breaking up. The government has done well to throw a number of major initiatives before the pub- lic, catching the opposition off balance reduced to crying for Royal Commissions, the ultimate symptom of intellectual impo- tence. In its Indian summer of creativity, the government can safely leave Sir George Gardiner to Sir James Goldsmith.

Chancellor Kohl has been invited by Germany's fat people to be a representative for their cause. Delegates at the first Feder- al Congress for Fat People in Hamburg last week appealed to the 19-stone statesman to attack the prevailing fashion for dieting.

We hope that Chancellor Kohl accepts this commission. His size is the most heart- ening thing about him. Indeed it is the only thing about him that is Eurosceptic. Mr Kohl's well-known penchant for full-fat sausages and sticky puddings is a nightmare for the faddish bureaucrats of Brussels.

Germans, historically, have been politi- cally incorrect about food. The fabled ladies in the Munich beer halls who hand around the giant glasses possess arms the width of the Rhine and legs that could sup- port the Brandenburg Gate. The great Otto von Bismarck was no sylph. He famously drank a bottle of iced champagne a day. Brussels may perhaps have approved of the Bismarck herring — but only because the herring is a fish that is unusually low in calories.

We applaud Chancellor Kohl for keeping up the old traditions of his countrymen and women in the face of increasingly hostile international opinion. But the lesson to be learnt here is more than just one of bravery or, as the unkind might argue, greed. Chan- cellor Kohl, though he may not know it, is incontrovertible proof that national charac- teristics ultimately triumph over federalism. You can't keep a good German down, or rather you can't keep his weight down.