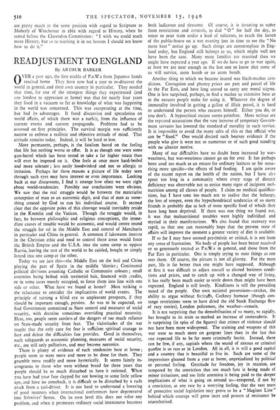 OVER a year ago, the first trickle of P.o.W.s from Japanese hands reached home They have now had a year to re-discover the world in general, and their own country in particular. They needed that time, for one of the strangest things they experienced (and one hardest to appreciate at home) was that for nearly four years they lived in a vacuum so far as knowledge of what was happening in the world was concerned. This was exasperating at the time, but had its advantages. It freed discussion and speculation on world affairs, of which there was a surfeit, from the influence of current events and current propaganda. Problems had to be assessed on first principles. The survival margin was sufficiently narrow to enforce a realistic and objective attitude of mind. That attitude remains today. Indeed, it will be hard to lose.

More permanent, perhaps, is the fatalism based on the feeling that life has nothing worse to offer. It is as though one were some gun-barrel which has been tested to take a far higher strain than will ever be imposed on it. One feels at once more hard-boiled and more tolerant ; less easily hoodwinked and not so allergic to irritation. Perhaps for these reasons a picture of life today seen through such eyes may have interest or even importance. Looking back at our discussions, I find it strange how often we were right about world-tendencies. Possibly our conclusions were obvious. We saw that the real struggle would be between the materialist conception of man as an economic digit, and that of man as some- thing created by God to run his individual course. It seemed clear that the opposite poles of this cleavage would inevitably reside in the Kremlin and the Vatican. Though the struggle would, in fact, be between philosophic and religious conceptions, the imme- diate causes of trouble would be economic, and would centre round the struggle for oil in the Middle East and control of Manchuria in particular and China in general. A common if lukewarm interest in the Christian ethic and need to control these areas would force the British Empire and the U.S.A. into the same camp to oppose Russia, leaving the rest of the world to be cajoled, bought or simply forced into one camp or the other.

Today we see just this—the Middle East on the boil and China playing the part of Spain in the middle 'thirties ; Continental political divisions assuming Catholic or Communist colours ; small countries being bribed with territorial bait, financed with credits, or in some cases merely occupied, to force them into line with one side or other. What have we found at home? Most striking is the reluctance to consider the implications of world events. The principle of turning a blind eye to unpleasant prospects, if they should be important enough, persists. As was to be expected, we find Government committed to State control and measures of social security, with doctrine sometimes overriding practical necessity. Here, too, people seem careless of the dangers of too much reliance on State-made security from fear. The vicissitudes of the war taught that the only cure for fear is sufficient spiritual courage to face and defeat the difficulties fate provides. Good in themselves, such safeguards as economic planning, measures of social security, etc., are still only palliatives, and may become narcotics.

There is plenty of evidence of such tendencies here at home ; people seem to want more and more to be done for them. They grumble more readily and more hysterically. It seems faintly in- congruous to those who were without bread for three years that people should be so much disturbed to have it rationed. When you have had your face slapped for not bowing to some little yellow ape, and have no comeback, it is difficult to be disturbed by a rude crack from a taxi-driver. It is not hard to understand a lowering of good manners when international conferences have degenerated into fishwives' fiestas. On its own level this does not solve any problem, and when it permeates ordinary social intercourse becomes

both ludicrous and tiresome. Of course, it is irritating to suffer from restrictions and controls, to dial " 0" for half the day, to totter to your train under a load of suitcases, to reach the haven of the public-house on a wet evening just in time to see the "No more beer " notice go up. Such things are commonplace in Eng- land today, but England still belongs to us, which might well not have been the case. Many more families are reunited than we might have expected a year ago. If we do have to go to war again, at least we are near enough to the last one to know that some of us will survice, atom bomb or no atom bomb.

Another thing to which we became inured was black-market con- ditions. Corruption and phoney prices are part and parcel of life in the Far East, and have long ceased to carry any moral stigma. One is less surprised, perhaps, to find a market so extensive here as at the excuses people make for using it. Whatever the degree of immorality involved in getting a gallon of illicit petrol, it is hard to understand the person who excuses himself. Either you do, or you don't. A hypocritical excuse seems pointless. More serious are the repeated accusations that the vast increase of temporary Govern- ment servants has lowered the standard of morality in such service. It is impossible to avoid the many tales of this or that official who can be " fixed." One would discard such hearsay evidence if the people who give it were not so numerous or of such good standing with no ulterior motive.

Many of our difficulties have no doubt been increased by war- weariness, but war-weariness cannot go on for ever. It has perhaps been used too much as an excuse for ordinary laziness or for some- thing more specific—the effects of bad feeding. I am quite aware of the recent report on the health of the nation, but I have also spent too long in a community where every stage of dietetic deficiency was observable not to notice many signs of incipient mal- nutrition among all classes of people. I claim no medical qualifica- tions, but I have seen too much not to realise that the lethargy, the loss of temper, even the hypochondriacal tendencies of so many friends is probably due to lack of some specific food of which they have long been deprived. If there was one thing we found out, it was that malnutritional troubles were highly individual and myriad in their manifestations. We also found that recovery was rapid, so that one can reasonably hope that the present state of affairs will improve the moment a greater variety of diet is available.

If so far I may have seemed pessimistic or critical, it is not from any sense of frustration. No body of people has been better received or so generously treated as P.o.W.s in general, and those from the Far East in particular. One is simply trying to state things as one sees them. Of course, the picture is not all gloomy. For the most part, life is far better than one might have supposed. Although at first it was difficult to adjust oneself to altered business condi- tions and prices, and to catch up with a changed way of living, it has really been much easier to settle down than might have been expected. England is still lovely. Kindliness is still the prevailing mood of the people. Our own national possessions—cricket, the ability to argue without fisticuffs, Cockney humour (though con- tango restrictions seem to have dried the old Stock Exchange flow of racy stories), London policemen, the weather—remain.

It is not surprising that the demobilisation of so many, so rapidly, has brought in its train so marked an increase of camaraderie. It is surprising (in spite of the figures) that crimes of violence should not have been more widespread. The training and weapons of this war were so much more on gangster lines than in the last that one expected life to be far more criminally hectic. Instead, there can be few, if any, capitals where the sound of riotous or criminal gunfire is so rare as in London. All in all, it is still a good capital and a country that is beautiful to live in. Such are some of the impressions gleaned from a year at home, unprejudiced by political or personal feeling. Gratitude for freedom, joy in reunion, are tempered by the conviction that too much fuss is being made of minor irritations, and too little attention is being paid to the deeper implications of what is going on around us—tempered, if not by a conviction, at any rate by a worrying feeling, that the vast mass of protective social legislation may prove to be a "Maginot Line" behind which courage will grow inert and powers of resistance be anaesthetised.