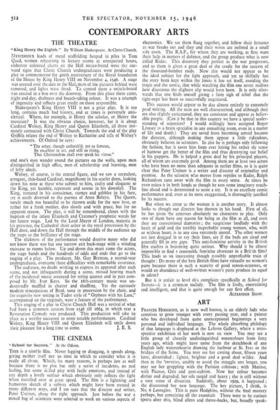 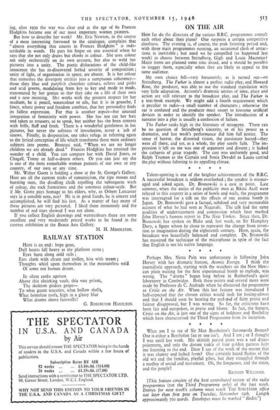 FRANCES HODGKINS, as is now well known, is an elderly lady who contrives to grow younger with every passing year, and a painter who has developed from quite unexceptional beginnings a very personal and individual language. The whole absorbing philology of that language is displayed at the Lefevre Gallery, where a retro- spective exhibition of her work is now on view. You may see a little group of cheerily undistinguished watercolours from forty years ago, which might have come from the sketchbook of any English lady watercolourist drawing the harbour at St. Ives or the bridges of the Seine. You may see her casting about, fifteen years later, dissatisfied ; lighter, brighter and a good deal wilder. And then in the 'twenties, unable to avoid the struggle any longer, you may see her grappling with the Parisian colossus ; with Matisse, with Picasso, Gris and post-cubism. Now her colour becomes dirtier and degraded, her oils turgid and heavy ; she is still without a sure sense of direction. Suddenly, about 1929, it happened ; she discovered her new language. The key picture, I think, is No. 6 Lanteglos. This is pure Hodgkins, without the final mastery perhaps, but containing all the essentials. There were to be curious sports after this, blind alleys and throw-backs, but, broadly speak-

ing, after 193o the way was clear and at the age of 6o Frances Hodgkins became one of our most important woman painters.

But how to describe her work? Mr. Eric Newton, in the course of a most interesting foreword to the catalogue, complains that " almost everything that counts in Frances Hodgkins " is inde- scribable in words. He puts his finger on one essential when he says that she not only draws but thinks in colour. She uses colour not only orchestrally on its own account, but also to weld het pictures into a unity. The poetic dislocations of the child-like innocence she has re-discovered forbid severity of composition ; unity of light, of organisation in space, are absent. It is her colour that enmeshes the divergent entities into a sumptuous coherency— those slaty blue and purplish chocolate colours, ochres and pinks and acid greens, modulating from key to key and mode to mode, transmuted by her genius so that they take on a life of their own and a new meaning. Sht works with the greatest respect for her medium, be it pencil, watercolour or oils, but it is in gouache, I fancy, where power and freedom combine, that her personality finds its fullest expression. For that is another aspect—her unusual integration of femininity with power. She has not cut her hair and taken to trousers, so to speak, but neither has she been content with frills, fluff and froth. There is a wonderful gentleness in het pictures, but never the softness of irresolution, never a ack of sinews. Finally, in desperation, one takes refuge in referring again to the lyrical conception of life which transforms these most ordinary subjects into poems. Brancusi said, " When we are no longer children we are already dead." Frances Hodgkins has retained the wonder of a child. You can compare her with David Jones, or Chagall, Tonny or half-a-dozen others. Or you can just say she is one of the most remarkable woman painters of our own or any country, of our own or any time.

Mr. Walter Goetz is holding a show at the St. George's Gallery. Here are all the current tricks of romanticism, the ripe moons and bursting suns, the doodling chalk repelling the subsequent wash of colour, the rock formations and the sonorous colour-scale. But if Mr. Goetz pays homage to his elders, why, as Osbert Lancaster says in a sensible note, not? He is in good hands, he is sincere and accomplished, he will find his feet. As a matter of fact many of these pictures are very personal. I liked them immensely and the number of red stars showed I was not alone.

If you collect English drawings and watercolours there are some excellent and very moderately priced works to be found in the current exhibition at the Beaux Arts Gallery.