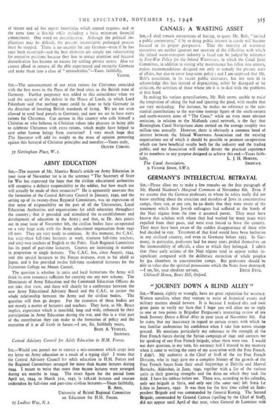 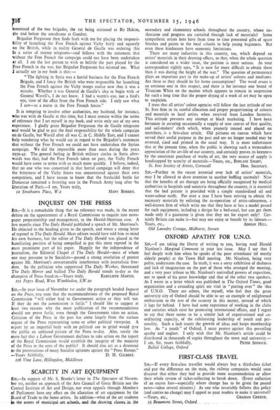 " JOURNEY DOWN A BLIND ALLEY "

SIR,—Women, rightly or wrongly, have no great reputation for accuracy. Women novelists when they venture to write of historical events and military matters should beware. It is because I realised this and took great pains to verify my facts that I hope you will allow me to reply to one or two points in Brigadier Fergusson's interesting review of my book Tourney Down a Blind Alley in your issue of November 8th. For he states that my inaccuracy in regard to certain events with which he was familiar undermines his confidence when I take him across strange ground. He mentions particularly my reference to the strength of the Free French forces during the Syrian campaign of 1941 and corrects me for speaking of one Free French brigade, when there were two. I would not dare question, in my turn, his accuracy had I trusted to my memory when it came to writing the story of my association with the Free French. I didn't. My authority is the Chief of Staff of the 1st Free French Division, who in 1945 gave me a complete history of the growth of the Free French forces from their small beginnings at Delville and Morval Barracks, Aldershot, in June, 1940, together with a list of the various units in their growing strengths and the dates on which they took the field. I have his tableau before me. There was, according to his calendar, only one brigade in Syria, and only one (the same one) left Syria Lir Libya in January, 1942. It was then for the first time called an Inde-. pendent Brigade and was commanded by General Koenig. The Second Brigade, commanded by General Cazoux (spelling by the Chief of Staff), did not appear until April of that year, when General de Larminat took P6 command of the two brigades, the nt being stationed at Bir Hakim, the znd before the aerodrome at Gambut.

Brigadier Fergusson then finds fault with me for placing the responsi- bility of launching the Free French against Vichy fairly and squarely on the British, while in reality General de Gaulle was ordering this In a series of stormy telegrams—and follows with the statement that Without the Free French the campaign could not have been undertaken at all. I am the last person to wish to belittle the part played by the Free French in the war, but Brigadier Fergusson has misread me. What a actually say in my book is this:-

" The fighting in Syria was a horrid business for the Free French Brigade, and I fancy the British who were responsible for launching the Free French against the Vichy troops realise now that it was a mistake. Whether it was General de Gaulle's idea to begin with or General Wavell's, I do not know. I had a worm's eye, not a bird's eye, view of the affair from the Free French side. I only saw what I saw—as a nurse in the Free French forces."

It is tempting to involve other authorities, my husband, for instance, who was with de Gaulle at this time, but I must remain within the terms of reference that I set myself in my book, and write only out of my own experience. I gladly grant Brigadier Fergusson the de Gaulle telegrams and would be glad to put the final responsibility for the whole campaign on de Gaulle, but Wavell after all was C. in C. Middle East, and I cannot help wondering what he would say in regard to the Brigadier's statement that without the Free French we could not have undertaken the Syrian campaign. We did the impossible more than once during the years 1939-45. The general feeling in British military circles in Syria after- wards was that, had the Free French taken no part, the Vichy French would have come to terms with us much more quickly. I believe, indeed, that no one who was concerned in that horrid campaign will deny that the bitterness of the Vichy forces was concentrated against their own compatriots, and I have reason to know that the fratricidal battle for Damascus remained a festering sore in the French Army long after *he liberation of Paris.—I am, Yours truly, I2 Strathearn Place, W.2 MARY BORDEN.