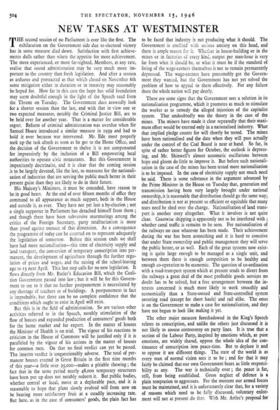 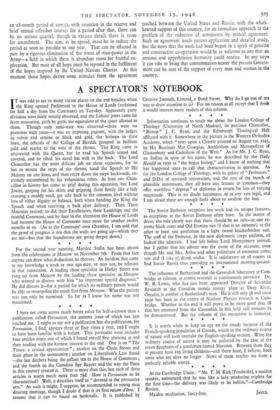 THE second session of no Parliament is ever like the first. The exhilaration on the Government side due to electoral victory has in some measure died down. Satisfaction with first achieve- ments dulls rather than whets the appetite for more achievement. The more experienced, or more far-sighted, Members, at any rate, realise that sound administration may be very much more im- portant to the country than fresh legislation. And after a session as arduous and protracted as that which closed on November 6th some mitigation either in duration or in intensity may reasonably be hoped for. How far in this case the hope has solid foundation may seem doubtful enough in the light of the Speech read from the Throne on Tuesday. The Government does avowedly look for a shorter session than the last, and with that in view one or two expected measures, notably the Criminal Justice Bill, are to be held over for another year. That is a matter for considerable regret. Reform of criminal administration was overdue when Sir Samuel Hoare introduced a similar measure in 1939 and had to hold it over because war intervened. Mr. Ede most properly took up the task afresh as soon as he got to the Home Office, and the decision of the Government to shelve it is not compensated for impressively by the inclusion of a Bill empowering local authorities to operate civic restaurants. But this Government is impenitently doctrinaire, and it is clear that the coming session is to be largely devoted, like the last, to measures for the nationali- sation of industries that are serving the public much better in their present guise than they are likely to do in their future.

His Majesty's Ministers, it must be conceded, have reason to be in good heart. At the end of over fifteen months of office they command to all appearance as much support, both in the House and outside it, as ever. They have not yet lost a by-election ; not a single supporter in Parliament has detached himself from them ; and though there have been subversive murmurings among the critics of the Foreign Secretary, party totalitarianism is more than proof against menace of that dimension. As a consequence the programme of today can be counted on to represent adequately the legislation of tomorrow. Before this session ends we shall have had more nationalisation—this time of electricity supply and land transport, the conversion of temporary conscription into per- manent, the development of agriculture through the further regu- lation of prices and wages, and the raising of the school-leaving age to 15 next April. This last step calls for no new legislation. It flows directly from Mr. Butler's Education Bill, which the Coali- tion Government passed into law ; but it will be for this Govern- ment to see to it that no further postponement is necessitated by any shortage of teachers or of buildings. A postponement in fact is improbable, but there can be no complete confidence that the conditions which ought to exist in April will exist.

But this is in the field of administration. So are various other activities referred to in the Speech, notably stimulation of the flow of houses and expanded production of consumers' goods both for the home market and for export. In the matter of houses the Minister of Health is on trial. The vigour of his reactions to criticism in the House of Commons will be justified only if it is paralleled by the vigour of his actions in the matter of houses for common men. On that no final verdict can yet be passed. The interim verdict is unquestionably adverse. The total of per- manent houses erected in Great Britain in the first nine months of this year—a little over 25,000—makes a pitiable showing ; the fact that in the same period nearly 48,000 temporary structures have been put up does not notably redeem it. But public bodies, whether central or local, move at a deplorable pace, and it is reasonable to hope that plans slowly evolved will from now on be bearing more satisfactory fruit at a steadily increasing rate. But here, as in the case of consumers' goods, the plain fact has to be faced that industry is not producing what it should. The Government is credited with serious anxiety on this head, and there is ample reason for it. Whether in house-building or in the mines or in factories of every kind, output per man-hour is very far from what it should be, or what it must be if the standard of living of the wage-earners themselves is not to remain permanently depressed. The wage-earners have presumably got the Govern- ment they wanted, but the Government has not yet solved the problem of how to appeal to them effectively. For any failure there the whole nation will pay dearly.

There are some signs that the Government sees a solution in its nationalisation programme, which it promotes as much to stimulate the worker as to remedy the alleged injustices of the capitalist system. That undoubtedly was the theory in the case of the mines. The miners have made it clear repeatedly that their maxi- mum effort would be exerted only in a nationalised industry. What that implied pledge counts for will shortly be tested. The mines have been nationalised and the date when they will pass actually under the control of the Coal Board is near at hand. So far, in spite of rather better figures for October, the outlook is depress- ing, and Mr. Shinwell's almost automatic oscillations between hope and gloom do little to improve it. But before such nationali- sation in the case of the mines has been tested more nationalisation is to be imposed. In the case of electricity supply not much need be said. There is some substance in the argument advanced by the Prime Minister in the House on Tuesday that, generation and transmission having been very largely brought under national ownership, it is reasonable that distribution should go the same way; and distribution is not at present so efficient or equitable that many tears need be shed over the change. Nationalisation of land trans- port is another story altogether. What it involves is not quite clear. Coastwise shipping is apparently not to be interfered with ; whether canal traffic is remains to be seen. For nationalisation of the railways no case whatever has been made. Their achievement during the war has been astonishing and it is hard to conceive that under State ownership and public management they will serve the public better, or as well. Each of the great systems now exist- ing is quite large enough to be managed as a single unit, and between them there is enough competition to be healthy and enough co-operation to be economic. The question of co-ordination with a road-transport system which at present tends to divert from the railways a great deal of the most profitable goods services no doubt has to be solved, but a free arrangement between the in- terests concerned is much more likely to work smoothly and economically than a State-owned and State-controlled system covering road (except for short hauls) and rail alike. The onus is on the Government to make a case for nationalisation, and they have not begun to look like making it yet.

The other major measure foreshadowed in the King's Speech relates to conscription, and unlike the others just discussed it is not likely to arouse controversy on party lines. It is true that a section of the Labour Party, inspired by emotions which, as pure emotions, are widely shared, oppose the whole idea of the con- tinuance of conscription into peace-time. But to deplore it and to oppose it are different things. The state of the world is as every man of normal vision sees it to be ; and for that it may fairly be claimed that our own Government bears as little responsi- bility as any. The war is technically over ; the peace is far, still, from being established. Gross neglect of defence is a plain temptation to aggressors. For the moment our armed forces must be maintained, and it is unfortunately clear that, for a variety of reasons which need to be fully discussed, voluntary enlist- ment will not at present do that. With Mr. Attlee's proposal for an 18-month period of service, with retention in the reserve and brief annual refresher courses for a period after that, there can be no serious quarrel, though in various details there is room for amendment. The aim, as he agreed, must be to reduce the period as soon as possible to one year. That can be effected in part by a rigorous elimination of the waste of man-power in the Army—a field in which there is abundant room for fruitful ex- ploration. But most of all hope must be reposed in the fulfilment of the hopes inspired by the United Nations Charter. At this moment those hopes derive some stimulus from the agreement reached between the United States and Russia, with the whole.. hearted support of this country, for an immediate approach to the problem of the reduction of armaments by mutual agreement. Such an agreement needs patient application and detailed study, but the news that the work had been begun in a spirit of genuine and constructive co-operation would be as welcome as any that an anxious and apprehensive humanity could receive. In any steps it can take to bring that consummation nearer the present Govern- ment can be sure of the support of every man and woman in the country.