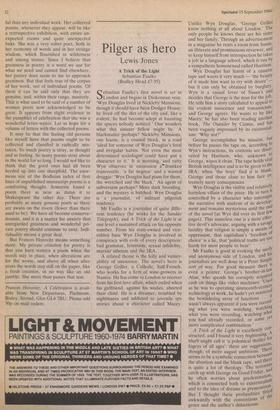 A Trick of the Light Sebastian Faulks (Bodley Head £7.95)

Sebastian Faulks's first novel is set in London and begins in Dickensian vein: `Wyn Douglas lived in Nickleby Mansions, though it should have been Dodger House: he lived off the dirt of the city and, like a rodent, he had become adept at haunting the spaces nobody noticed.' One wonders what this sinister fellow might be. A blackmailer perhaps? Nickleby Mansions, one learns, is a council block, in a road `ideal for someone of Wyn Douglas's feral and irregular habits. Not even the most determined sociologist could have put a character to it.' It is morning, and ratty Wyn observes in succession a'drunken transvestite, 'a fat negress' and a wasted druggie: 'Wyn Douglas had plans for them, the wretched and the black.' An agent of subversion perhaps? More dark brooding, and the mystery is hatched: Wyn Douglas is a journalist, of militant pilgerish tendency.

Mr Faulks is a journalist of quite diffe- rent tendency (he works for the Sunday Telegraph), and A Trick of the Light is at one level a sustained attack on his opposite number. From his state-owned and vice- ridden base Wyn Douglas is involved in conspiracy with evils of every description: bad grammar, feminism, sexual infidelity, marxist atheism and the IRA.

A related theme is the folly and vulner- ability of innocence. The novel's hero is George Grillet, a Catholic, half-French, who works for a firm of wine-growers in Nantes. He has come to London to recover from his first love affair, which ended when his girlfriend, against his wishes, aborted their child. He is a dreamer, troubled by nightmares and addicted to juvenile spy stories about a character called Macey.

Spectator 15 September 1984' Unlike Wyn Douglas, 'George Grillet knew nothing at all about London.' The only people he knows there are his sister and her family. Through an advertisement in a magazine he rents a room from Susan, an illiterate and promiscuous reviewer, and to keep himself from introspection he takes a job in a language school, which is run by a sympathetic homosexual called Harrison. Wyn Douglas has learnt of a cassette tape and wants it very much — 'the beauty of it made him want to cry with desire' — but it can only be obtained by burglary. Wyn is a casual lover of Susan's and decides that George is the man for the job. He tells him a story calculated to appeal to his evident innocence and romanticism, and George agrees. He wants to be like Macey; he has also been reading another book, The Outsider by Camus, and has been vaguely impressed by its existential- ism: 'Why not?' George accomplishes his mission, but before he passes the tape on, according to Wyn's instructions, its contents are disco- vered by Harrison, who, unknown to George, wipes it clean. The tape holds vital British intelligence and is to be given to the IRA; when 'the boys' find it is blank, George and those close to him face ex- tremely nasty consequences. Wyn Douglas is the visible and relatively harmless villain of the piece. He in turn is controlled by a character who interrupts the narrative with analysis of its develop- ment and remains mysterious until the end of the novel (as Wyn did over its first few pages). This nameless one is a most effec- tive devil's advocate, arguing with a savage, lucidity that religion is simply a means 01, oppression, that capitalism's 'freedom 01 choice' is a lie, that 'political truths are to° harsh for most people to bear'. Mr Faulks is good at evoking the seedy and anonymous side of London, and his journalists are well done in a Peter Simple sort of way. For good measure there is even a printer, George's brother-in-law, Alan, who spends his corruptly acquire'', cash on things like video machines: 'Use' as he was to operating nineteenth-century. technology at work, he hadn't yet mastered the bewildering array of functions . • • It wasn't always apparent if you were record- ing what you were watching, watching what you were recording, watching What you had already recorded, or some Ye`. more complicated combination.' A Trick of the Light is excellently con: structed, and I found it very frightening• blurb might call it 'a polemical thriller Or fogeys of all ages': there are suggestions, though, of more august ambitions. There seems to he a symbolic connection between the abortion and the blank tape, and there is quite a lot of theology. The terrorists , catch up with George on Good Friday, and he often worries about predestination'

and the idea dreams as

both existentialism existentialis d But I thought these profundities awkwardly with the conventions of tn` genre and the author's didacticism.