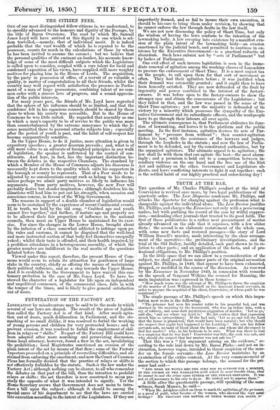 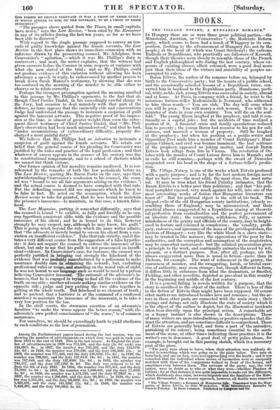 TRUTH AT THE BAR.

THE question of Mr. Charles Phillips's conduct at the trial of Courvoisier is revived once more, by two legal publications of the quarterly order. The Law Magazine condemns Mr. Phillips, and attacks the Spectater for charging against the profession what is chargeable against the individual alone. The Law Review justifies Mr. Phillips, and charges the Examiner not only with a rsevering malice, but with garbling the record of the case by wilful suppres- sion,—misleading other journals that trusted to its good faith. The first of these publications is a rather neat presentment of matter already advanced on the side that it espouses, with a few obiter i dicta : the second s an elaborate restatement of the whole case, with some new facts and restored passages—the story of Lord William Russell's murder, made interesting by the clear arrange- ' ment of the narrative—the preliminary investigations, and the trial at the Old Bailey, lucidly detailed, each part shown in its re- lation to other parts ; and an application of the facts, and of pro- fessional obligations, to Mr. Phillips's position. In the little space that we can allow to a reconsideration of the subject, we shall avoid those minor parts of the original accusation against Mr. Phillips, in 1840, that appear to have been exhausted, dropped, or modified in the course of the discussion. As renewed by the Examiner in November 1849, in connexion with remarks on the speech of Sergeant Wilkins the counsel for Manning, the main imputation was expressed in these terms— "How much worse was the attempt of Mr. Phillips to throw the suspicion ofthemurder of Lord William il:rm Russell ocentfaaleslasitordert acquittal of of ose guilt servants, cognizant.

passage of Mr. Phillips's speech on which this impu- tation now rests is the following. "The prisoner had seen his master retire to his peaceful bed, and was alarmed m the morning by the housemaid, who was up before him, with cry of robbery, and some dark mysterious suggestion of murder. Let us go,' said she, and see where my Lord is.' Ile did confess that that expression struck him as extraordinary. If she had said, 'Let us go and tell my Lord that the house is plundered,' that would have 'been natural ; but why should she suspect that aught had happened to his Lordship ? She saw her fellow tervants safe, no taint of blood about the house ; and where did she expect to nd her master ? why, in his bedroom to be sure. What was there to load to a suspicion that he was hurt ? Courvoisier wasirife, the cook was safe, and whilltuld she suspect that her master was not safe too ?" this was a " fair argument arising on the evidence," ac- cording to the rule laid down by Mr. Baron ,FiLike—and not an in- sinuation, however vague, intended to throw suspicion of the mur- der on the female servants—the Law Review maintains by an examination of the entire context. At the very commencement of the section to -which this passage belongs, the counsel for the pri- soner had said— "AND HERE HE WOULD DEG THE AMY NOT TO SUPPOSE FOR A MOMENT, IN THE commit OP THE NARRATIVE With Which he Mlle trouble them, that he meant to cast the crime upon Errarat OF THE FEMALE SiauveNts. It was mot at all necessary to his case to do so. He wished not to asperse them."

A little after the questionable passage, still speaking of the same witness, Sarah Manser, he said-

" When Mr. Adolphus called on them to mark the agitation of the prisoner, as a proof of t, what became of the women, who showed the very same feelings ? nE THOUGHT THE BETTER OF THESE WOMEN FOR DOING SP

"The passages above quoted from the Times, in small capitals, have never," says the Law Review, "been cited by the _Examiner in any of its articles during the last ten years, as far as we have been able to discover."

With regard to the single passage supposed to convey an inu- endo of guilty knowledge against the female servants, the Law Review in the first place shows its immediate connexion with an inference drawn by the prosecuting counsel, Mr. Adolphus, from Courvoisier's " agitation,"—which it was Mr. Phillips's duty to controvert ; and next, the writer explains, that the witness had given answers before the Coroner in some respects at variance with what she now stated at the trial ; and as Mr. Phillips could not produce evidence of this variation without allowing his keen adversary a Itetieli in reply, he endeavoured by another process to

break down Manser's testimony, by showing that she was too confused on the morning of the murder to be able either to observe or to relate correctly. Perhaps the strongest presumption against the meaning ascribed to this passage by Mr. Phillips's opponents, is the fact that al- though Chief Justice Tindal, in his exceedingly careful charge to the Jury, had occasion to deal minutely with that part of the defence, no trace appears that the eminently able and conscientious Judge find understood the passage to insinuate a suspicion of guilt against the innocent servants. This negative proof of his impres- sion at the time, is almost of greater weight than even the subse- quent direct testimony of Chief Justice Tindal, that " Mr. Phil- lips's observation had been much misunderstood," and that he had, "under accumulations of extraordinary difficulty, properly dis- charged a most painful duty." We believe that Mr. Phillips had no intention to insinuate a suspicion of guilt against the female servants. We retain our belief that the general course of his pleading for Courvoisier was justified by the rules and practice of the legal profession ; and that whatever of excess appears in the manner of his oratory was due to constitutional temperament, and to a school of rhetoric which we cannot but think vicious.

Our former opinion of bar morality remains unaltered. It is cor- roborated by the remarks of both the law periodicals before us. The Law Review, quoting Mr. Baron Parke on the case, says that, notwithstanding Courvoisier's confession to his counsel, the coun- sel was " bound to use all fair arguments arising on the evidence "; and the actual course is deemed to have complied with that rule. But the defending counsel did use arguments which he knew to be false in fact. He acted on the assumption, which the Law Review seems to take for granted, that he was bound to maintain the prisoner's innocence—to maintain, in this case, a known false-

The Law Magazine, putting it somewhat differently, says that the counsel is bound " to exhibit, as fully and forcibly as he can, any hypothesis consistent alike with the evidence and the possible innocence of his client; and he is bound to do this, however strongly he may suspect, nay, although he may know, his guilt." This is going much beyond the rule which the same writer admits, -that "the advocate is merely bound to screen his client from a con- viction on insufficient evidence." Take that rule strictly, and it dic- tates a very different course from the suggestion of a false hypothe- sis : it does not require the counsel to enforce the innocence of his client, but only to see that his guilt be not pronounced on insuffi- cient evidence. In Courvoisier's case, for instance, the counsel was perfectly justified in bringing out strongly the falsehood of the evidence that was probably manufactured by a policeman to make assurance doubly sure in obtaining the reward; but, excluding professional rules or u ge, and standing on the moral rule of right, he was not bound to use language such as would be used by a person believing Courvoisier innocent. The rationale of the advocate's la- bours is, that he is engaged in trying to find all the evidence of the truth on one side ; another advocate seeking similar evidence on the opposite side ; judge and jury putting the two sides together in getting at the whole truth. But falsehood is no element of truth ; and to pretend that a barrister is at the command of a confessed murderer to maintain the innocence of the miscreant, is to take a very low position for the bar.

In the civil courts, the strenuous exertion of an advocate's faculties "to make the worse appear the better reason," with the advocate's own perfect consciousness of " the worse," is of common occurrence.

For ourselves, we should be exceedingly loath to yield obedience 'to such conditions as the law of journalism.