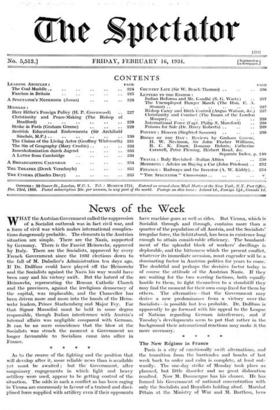 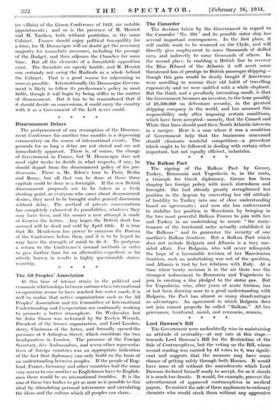 The New Regime in France Paris is a city of

emotionally swift alternations, and the transition from the barricades and bombs of last week back to order and calm is complete, at least out-: wardly. The one-day strike of Monday took place as planned, but little disorder and no great dislocation resulted, Now M. Doumergue has his chance. He has formed his Government of national concentration with only the Socialists and Royalists holding aloof. Marshal Main at the Ministry of War and M. Barthou, hero (or villain) of the Genoa Conference of 1922, arc notable appointment; and so is the presence of M. Herriot and M. Tardieu, both without portfolios, in the same Cabinet. France should -enjoy political tranquillity for a time, for M. Doumerguc will no doubt get the necessary majority for immediate measures, including the passage of the Budget, and then adjourn the Chamber for some time. But all the elements of a formidable opposition exist. The Socialists arc openly hostile, and M. Herriot can certainly. not swing the Radicals as a whole -behind the Cabinet. That is a good reason for adjourning as soon as possible. Internationally the Doumergue Govern- ment is likely to follow its predecessor's policy in most fields, though it will begin by being stiffer in the matter of disarmament. But it has to be remembered that if it should decide on concessions, it could carry the country with it as a Government of the Left never could.