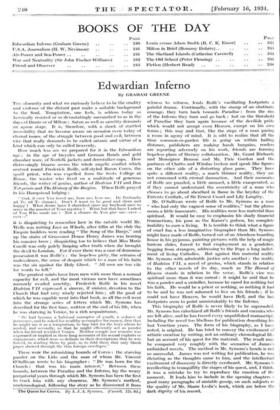 By GRAHAM GREENE Tin.: obscurity and what we curiously believe to be the crudity and violence of the distant past make a suitable background to the Soul. Temptation, one feels, is seldom today . so heroically resisted or so devastatingly succumbed to as in the days of Dante or of Milton ; Satan as well as sanctity demands

an apron stage. It is, therefore, with a shock of startled incredulity that we become aware on occasion even today of

eternal issues, of the struggle between good and evil, between vice that really demands to be called satanic and virtue of a kind which can only be called heavenly.

How much less are we prepared for it in the FAlwardian

age ; in the age of bicycles and German Bands and gold chamber ware, of Norfolk jackets and deerstalker caps. How distressingly bizarre seems the whole angelic conflict which centred round Frederick Rolfe, self-styled Baron Como, the spoilt priest, who was expelled from the Scots College at Rome, the waster who lived on a . multitude of generous friends, the writer of genius, author of Hadrian VII and Don Tthquinio and The History of the Borgias. When Rolfe prayed in his Hampstead lodging : " God, if ever You loved me, hear me, hear me. De Profondis ad Te, ad To clamavi. Don't I want to be good and clean and happy ? What desire have I cherished since my boyhood save to serve in the number of Your mystics ? What but that have I asked of You Who made me 7 Not a chance do You give me—ever- over—" it is disquieting to remember how in the outside world Mr. Wells was writing Love on Wheels, after tiffin at the club the Empire builders were reading "The Song of the Banjo," and

up the stairs of Grosvenor House Henry James was bearing his massive brow ; disquieting too to believe that Miss Marie Corelli was only palely limping after truth when she brought the devil to London. For if ever there was a case of demoniac possession it was Rolfe's : the hopeless piety, the screams of malevolence, the sense of despair which to a man of his faith was the sin against the Holy Ghost. "All men are too vile for words to tell."

The greatest saints have been men with more than a normal capacity for evil, and the most vicious men have sometimes narrowly evaded sanctity. Frederick Rolfe in his novel Hadrian VII expressed a sincere, if sinister, devotion to the

Church that had very wisely rejected him ; all the good of which he was capable went into that book, as all the evil went into the strange series of letters which Mr. Symons has described for the first time, written at the end of his life, when he was starving in Venice, to a rich acquaintance.

"He had become a 'habitual corrupter of youth, 'a seducer of Innocence, and he asked his wealthy accomplice for money, first that he might use it as a temptation, to buy .bait for the boys whom he misled, and secondly, so that he might efficiently act as pander when his friend revisited Venice. Neither scruple nor remorse was expressed or implied in these long accounts of his sexual exploits or enjoyments, which were so definite in their descriptions that he was forced, in sending them by post, so to fold them that only blank paper showed through the thin foreign envelopes."

These were the astonishing bounds of Corvo : the starving pander on the Lido and the man of whom, Mr. Vincent O'Sullivan wrote to his biographer : "He was born for the Church : that was his main interest." Between these bounds, between the Paradise and the Inferno, lay the weary purgatorial years through which Mr. Symons has been the first to track him with any closeness. Mr. Symons's method, onehronological, following the story as he diSeovered it from

The Quest for Corvo. By A. J. A. Symons. (Cassell. 128. 6d.) witness to witness, lends Rolfe's vacillating footprints a painful drama. Continually, with the stamp of an obstinate courage, they turn back towards Paradise : from the rim of the Inferno they turn and go back ; but on the threshold of Paradise they turn" again because of the devilish pride Which would not accept even Heaven, except on his own terms ; this way and that, like the steps of a man pacing a room in agony of mind. It is. odd to _realize that all the time 'common-or-garden life is going on within hailing distance, publishers are making harsh bargains, readers are reporting adversely on his work, friends are forming hopeless plans of literary collaboration. .Mr. Grant Richards and Monsignor Benson and Mr. Pine Gordon and the partners of Chatto and Windus beckon and speak like figures on the other side of a distorting glass pane. They have quite a different reality, a much thinner reality, they are not concerned with eternal damnation. And their memories of Rolfe are puzzled, a little amused, a little exasperated, as if they cannot understand the eccentricity of a man who chooses to go about sheathed in flame in the heyday of the Entente Cordiale, of Sir Ernest Cassel and Lily Langtry. - Mr. O'Sullivan wrote of Rolfe to Mr. Symons as a man "who had only the vaguest sense of realities," but the phrase seems a little inaccurate. His realities were less material than spiritual. It would be easy to emphasize his shady financial transactions, his pose as the Kaiser's godson, his complete inability to earn a living. It is terrible to think what a figure of cruel fun a less imaginative biographer than Mr. Symons might have made of Rolfe, turned out of an Aberdeen boarding house in his pyjamas, painting pictures with the help of magic lantern slides, forced to find employment as a gondolier, begging from strangers, addressing to the Pope a long indict- ment of living Catholics. But against this material reality Mr. Symons with admirable justice sets another : the reality of Hadrian VII, a novel of genius, which stands in relation to the other novels of its day, much as The Hound of Heaven stands in relation to the verse. Rolfe's vice was spiritual more than it was carnal : it might be said that he was a pander and a swindler, because he cared for nothing but his faith. He would be a priest Or nothing, so nothing it had to be and he was not ashamed to live on his friends ; if he Could not have Heaven, he would have Hell, and the last footprints seem to point unmistakably to the Inferno. • This biography of Rolfe is never likely to be superseded. Mr. Symons has entechized all Rolfe's friends and enemies who are left alive, and he has traced every unpublished manuscript, including the novel too libellous for publication describing his last Venetian years. The form' of his biography, as I have noted, is original. He has tried to convey the excitement of artistic creation by writing, not an ordinary chronological life, but an accbunt of his quest for the 'Material. The result may be . compared very roughly with the 'scenarios 'of jaines's unfinished novels. The method in' Mr. SymOns's hands is 'not so successful. James was not writing for publication, he was dictating as the thoughts came to him, and the intellectual excitement of discovery is directly. Overheard. Mr. Syinops is recollecting in tranquillity the stages of his quest, and, I think, it was a mistake to try to reproduce the emotion of the moment. It leads him to include in the opening chapters a good many paragraphs of amiable gossip, on -such subjects as the quality of Mr. Shane Leslie's hock, which are below the dark dignity -of his record. -