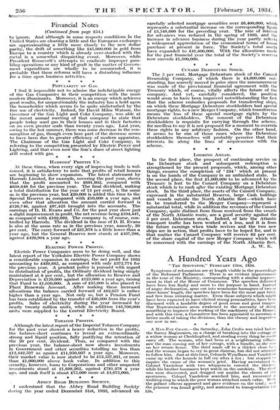 At these times, when every sign of improving trade is wel- comed, it is satisfactory to note that profits of retail houses are beginning to show expansion. The latest statement by Harrods Limited, for example, covering the past year, shows that the profit amounted to £691,602, compared with £638,649 for the previous year. The final dividend, making a total distribution for the year of 15 per cent., is the same as in the previous year, but £20,000 is added this time to the Special Reserve as compared with £10,000 a year ago, and even after that allocation the amount carried forward is £126,746, against 197,423 brought into the accounts. The earnings of D. H. Evans and Co. for the past year show just a slight improvement in profit, the net revenue being £104,447, as compared with /102,092. The company is, of course, con- trolled by Harrods. The dividend in the case of D. H. Evans is also at the same rate as in the previous year, namely, 30 per cent. The carry forward of £81,878 is a little lower than a year ago, but the General Reserve now stands at £437,288, against /420,904 a year ago.