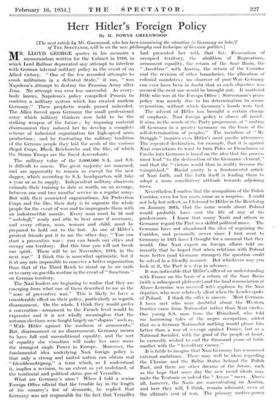 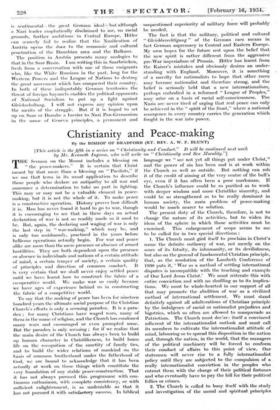 By H. POWYS GREENWOOD [The next article by Mr. Greenwood, who has been examining the situation in Germany on behalf of THE SPECTATOR, will be on the new philosophy and technique of German politics.] MR. LLOYD GEORGE quotes in his memoirs a memorandum written for the Cabinet in 1916, in which Lord Balfour deprecated any attempt to interfere with German internal military policy in the event of an Allied victory. "One of the few recorded attempts to crush militarism in a defeated State," it ran, "was Napoleon's attempt to destroy the Prussian Army after Jena. No attempt was ever less successful. - As every- body knows, Napoleon's policy compelled Prussia to contrive a military System which has created modern Germany." These prophetic words passed unheeded. The Allies forced upon Germany the small professional army which military thinkers now hold to be the striking weapon of the future ; by imposing material disarmament they induced her to develop a complete scheme of industrial organization for high-speed arms production ; and by frustrating the military tradition of the German people they laid the seeds Of the various illegal Corps, Black Reichswehr and the like, of which the Storm Troops are the lineal deseendants.

The military' value of the 3,000,000 S.A. and S.S. is difficult to assess.. The great Majority. are unarmed, and are apparently to remain so' except for the new dagger, Which according to S.A. headquarters will take a year or, so to supply. 'Independent military observers estimate their training to date as worth, on an average, between one and two months' service in a regular army. But with their associated Organizations, Air Protection Corps and the like, their duty is to organize the whole people for the event Of war and to impregnate them with an indestructible morale. Every man must be fit and " wehrhaft," ready and able to bear arms if necessary, and everr citizen, man, woman and child, must be Prepared to hold out to the last. As one of Hitler's greatest friends put it to me the other day, " You can tart a preventive war ; you can bomb our cities and Occupy our territory. But this time you will not break our spirit. There will be no November, 1918, in the next war." I think this is somewhat optimistic, but it is at any rate impossible to conceive a better organization than that of the Third Reich to stand up to air raids or to carry on guerilla warfare in the event of" Sanctions" on German territory, The Nazi leaders are beginning to realize that they arc emerging from what one of thena described to the as the ".zone of preventive war." This is likely to have a considerable effect on their policy, particularly as regards disarmament. On the whole,. I think they would prefer a convention—armament to the French level would be expensive and it is not wholly meaningless that the autumn elections were fought largely on" slogans "such as, " With Hitler against the madness of armaments." But, disarmament or no disarmament, Germany means to have full and unconditional equality, and the sort of equality she. visualizes will make her once more the strongest single Power. in Europe. , Moreover, the fundamental idea underlying Nazi foreign , is that only .a strong and united nation can :obtain real "Gleichberechiigung," a term which, as I understand it, implies a revision, to an extent as yet undefined, of the territorial and political status quo of Versailles.

What- are Germany's aims ? When I told .a senior Foreign Office official that the trouble lay in the length of his country's lid of demands„ he replied that Germany was not responsible for the fact that Versailles had presented her with that list. Evacuation of occupied territory, the abolition of Reparations, armament equality, the return of the Saar Basin, the " Anschluss" with Austria, the return of the Corridor and the revision of other boundaries, the allocation of colonial mandates ; no observer of post-War Germany can ever have been in doubt that as each objective was secured the next one would be brought out. It mattered little who was at the Foreign Office ; Stresemann's peace policy was merely due to his determination to secure evacuation, without which Germany's hands were tied.

The advent of Hitler has brought a certain change of emphasis. Nazi foreign policy is above all racial ; it aims, in the words of the Party programme, at " uniting all Germans in a greater Germany on the basis of the self-determination of peoples." The racialism of " My Struggle " inspires even Hitler's most pacific utterances.

The repeated declaration, for example, that it is against Nazi convictions to want to turn Poles or Frenchmen or Czechs into Germans is based on the idea that the process must lead "to the destruction of the Germanic element," and that the " victors would thus in reality become the vanquished." Racial purity is a fundamental article of Nazi faith, and this faith itself is leading them to adopt a more conciliatory attitude towards adjoining races.

Nevertheless I confess that the recognition of the Polish' Corridor, even for ten years, came as a surprise. I could not help but reflect, as I listened to Hitler in the Reichstag on January 30th, that the same words about Poland would probably have cost the life of any of his predecessors. I know that many Nazis and others in Germany regard the Pact as a skilful political move. The Germans have not abandoned the idea of regaining the.

Corridor, and personally never since I first went to Germany in 1921 have I thought for a moment that they would. One Nazi expert on foreign affairs told me recently that he hoped that when relations with Poland were better (and Germany stronger) the question could be solved in a friendly manner. But whichever way you look at it, the Pact is a step in advance.

It was noticeable that Hitler's offer of an understanding With France on the basis of a return of the Saar Basin (with a subsequent plebiscite) andthefinal renunciation of Alsace.iorraine was received with applause by the Nazi deputies, who were relatively silent when the Leader spoke of Poland. I think the offer is sincere. Most Germans I have met who were doubtful about the Western frontier came from Nationalist rather than Nazi circles.

One young S.S. man from the Rhineland, who told .me harrowing tales of the negro occupation, added that as a Getman Nationalist nothing would please him *better than a war of revenge against France, but as a National Socialist, with the good of the people at heart, he earnestly wished to end the-thousand years of futile conflict with the "hereditary enemy."

It is futile to imagine that Nazi Germany has renounced external ambitions. There may well be ideas regarding the Ukraine and the Baltic States behind the Polish Pact, and there .are other dreams of the future, such as the hope that some day the new racial ideals may unite the Teutonic or indeed the " Aryan " races. Above all, however, the Nazis are concentrating on Austria, and here they will, I think, remain adamant, even at the ultimate cost :cf war, The primary motive-power is sentimental—the great German ideal-but although a Nazi leader emphatically disclaimed to me, On racial grounds, further ambitions" in Central Europe, Hitler can scarcely fail to realize that the Nazifieation of Austria opens the door to the economic and .cultural penetration of the Danubian area and the Balkans.

The position in Austria presents many analogies to that in the Saar Basin. I am writing this in Saarbriicken, fresh from a conversation with one of those emigrants who, like the White Russians in the past, .long for the Western Powers and the League of Nations to destroy the great movement which has conquered their country. In both of these indisputably German territories the threat of foreign bayonets enables the political opponents of National Socialism to put up a fight against Gleichschaltung. I will not express any opinion upon the merits of the straggle. But if it is hoped to set up on Saar or 'Danube a barrier...to Nazi Pan-Germanism in the name of Geneva principles, a permanent and - unquestioned superiority of military force will probably. be needed.

The fact is that the military, political and cultural " Gleichberechtigung" of the German race means in fact German supremacy in Central and Eastern Europe. My own hopes for the future rest upon the belief that the new spirit is rather different from the aggressive pre-War imperialism *of Prussia. Hitler has learnt from the Kaiser's mistakes and Obviously desires an under- standing with England. Moreover, it _ is something of a novelty for nationalists to hope that other . races may become nationalist and therefore strong, and the belief is seriously hekl that a new internationalism; perhaps embodied in a reformed "League of Peoples," may arise on a basis of racial self-consciousness. The Nazis are never tired of urging that real peace can only be achieved in the "spirit of the front," where a national resurgence in every country carries the generation which fought in the war into power.