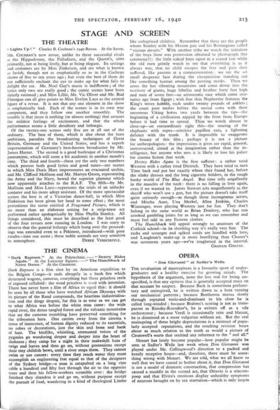 " Dark Rapture." At the Polytechnic.— " Destry Rides Again." At the Leicester Square.—" The Hunchback of Notre Dame." At the Gaumont.

Dark Rapture is a film shot by an American expedition to the Belgian Congo—it ends abruptly in a bush fire which destroyed wagons, cameras, everything but these priceless reels of exposed celluloid : the word priceless is used with intention. There has never been a film of Africa to equal this: it should be seen by all those who have watched African Skyways with its picture of the Rand compounds, the heartless industrialisa- tion and the dingy despair, for this is as near as we can get to what Africa was before the white man came: the wide rapid river, the dense tangled forest and the volcanic mountains that set the cameras trembling have preserved something for the tribesmen here. One carries away from the cinema a sense of innocence, of human dignity reduced to its essentials, no robes or decorations, just the skin and bone and hank of hair. The birdlike, whistling, attenuated voices of the pygmies go wandering deeper and deeper into the heart of darkness ; they camp for a night in their makeshift huts of twigs and leaves and then go on, without possessions except their tiny childish bows, until a river stops them. They cannot swim or use canoes : every time they reach water they must accomplish an engineering feat equal to that of the designers of the Sydney bridge—a man is catapulted on a long vine cable a hundred and fifty feet through the air to the opposite trees and then his fellow-workers scramble over : the bridge finished they abandon it and go on, without purpose except the pursuit of food, wandering in a kind of theological Limbo

like unbaptised children. Remember that these are the people whom Stanley with his Maxim gun and his Remingtons called " vicious dwarfs." With another tribe we watch the initiation of the boys (how was permission obtained to photograph this ceremony?): the little naked boys squat in a scared row while the old men grimly watch to see that everything is as it always was, that no child escapes the fear and pain they suffered, like parents at a commemoration : we see the set small desperate face during the circumcision standing out like something human among the peering masks. Then we cross the hot vibrating mountains and come down into the territory of giants, huge lobelias and heather forty feet high and men of seven feet—an aristocratic race which came cen- turies ago from Egypt ; with fine thin Nephertite features the King's wives hobble, each under twenty pounds of anklets ; the court poet recites before the sacred cows with their enormous Viking horns two yards between the tips—the beginning of a civilisation nipped by the frost from Europe before it had time to spread. Then we watch almost in close-up—an extraordinary sight this—the snaring of the elephants with ropes—sensitive papillon ears, a lightning defence with the trunk. It is impossible to exaggerate the beauty of this film ; perhaps it is not a picture for anthropologists: the impressions it gives are rapid, general, uninstructed, aimed at the imagination rather than the in- telligence, but anyone who sees it is likely to lose his palate for cinema fiction that week.

Destry Rides Again is the first sufferer : a rather tired Western with a rather tired Dietrich. They have tried to turn Time back and put her exactly where they found her, before the slinky dresses and the long cigarette holders, in the tough husky world of The Blue Angel. But time tells ungallantly in the muscles of the neck : there is no falling in love again, even if we wanted to. James Stewart acts magnificently as the sheriff who won't use a gun, but the picture doesn't take itself quite seriously enough—as though these incongruous actors, and Mischa Auer, Una Merkel, Allen Jenkins, Charles Winninger, were playing Western just for fun. They don't belong to the same world as Brian Donlevy, who has run crooked gambling joints for as long as we can remember and must feel odd in any Eastern clothes.

The Hunchback will appeal strongly to amateurs of the Cothick school—in its shocking way it's really very fine. The racks and scourges and spiked cords are handled with love, and Laughton's make-up is more horrifying than Chaney's was seventeen years ago—we've toughened in the interval.