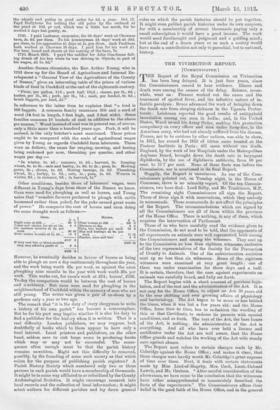 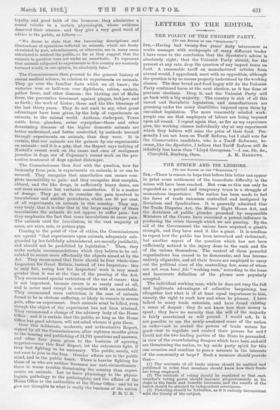 Page 10, 16 March 1912 — T HE Report of the Royal Commission on Vivisection has been
Close

T HE Report of the Royal Commission on Vivisection has been

long delayed. It is just four years, since the Commissioners ceased to hear evidence. Illness and death were among the causes of the delay. Science, mean- while, went on : Flexner worked out the cause and the treatment of spotted fever, and the infective nature of in- fantile paralysis : Bruce advanced the work of bringing down the death rate from sleeping sickness in the Uganda Protec- torate: Leishman reported the good results of antityphoid

inoculation among our men in India; and, in the United States, Wood issued his Army Order, making this protection compulsory on every officer and man under forty-five, in the American army, who had not already suffered from the disease. France, not to be outdone by other nations, was able to show, in 1911, her record for 1910 of bitten cases treated at the Pasteur Institute in Paris : 401 cases without one death. England, by time work of her Hospitals under the Metropolitan Asylums Board, brought down the death rate in laryngeal diphtheria, by the use of diphtheria antitoxin, from 60 per cent. to 11.7 per cent. None of these facts was before the Commission, nor is mentioned in its final Report.

Happily, the Report is unanimous. As one of the Com- missioners pointed out, on Tuesday night, in the House of Commons, there is no minority report. Of the ten Commis- sioners, two have died : Lord Selby, and Mr. Tomkineon, M.P. The remaining eight Commissioners all sign the Report.. Three of them sign it with reservations, which they embody in memoranda. These memoranda do not affect the principles. of the Report. The recommendations which are signed by all the Commissioners are all of them within the province of the Home Office. There is nothing, in any of them, which requires the intervention of Parliament.

Those of us who have carefully read the evidence given to the Commission, do not need to be told, that the opponents of all experiments on animals were well represented, both among the Commissioners and among the witnesses. They sent up to the Commission no less than eighteen witnesses, exclusive of the two representatives of the Society for the Prevention of Cruelty to Animals. One of the antivivisection societies sent up no less than six witnesses. Some of the eighteen witnesses were examined at very great length : one of them was under examination for three days and a half. It is certain, therefore, that the case against experiments on animals was carefully beard, and fully set forth.

The Report begins with a short account of previous legis- lation, and of the text and the administration of the Act. It is not easy for the Home Office, to adjust an Act 36 years old to the ever shifting and ever growing affairs of physiology and bacteriology. The Act began to be more or less behind the times, when it was but a few years old : and the Home Office, from time to tune, has to re-fashion the wording of this or that Certificate, to endorse its permits with special conditions, and so forth. The text of the Act, the bare bones of the Act, is nothing : the administration of the Act is everything. And all who have ever held a licence and certificates under the Act are well aware, that the Home Office guards and watches the working of the At with steady care against abuses.

The Report next refers to certain charges made by Mr. Coleridge against the Home Office ; and makes it clear, that these charges were hardly worth Mr. Coleridge's great expense of time over them. Next, it deals with certain statements made by Miss Lind-af-Hageby, Mrs. Cook, Lieut.-Colonel Lawrie, and Mr. Graham. "After careful consideration of the above cases, we have come to the conclusion that the witnesses have either misapprehended or inaccurately described the facts of the experiments." The Commissioners affirm their belief in the good faith of the Home Office, and in the general loyalty and good faith of the licensees: they administer a sound rebuke to a certain physiologist, whose evidence deserved their censure : and they give a very good word of advice to the public, as follows :—

" We desire to state that the harrowing descriptions and illustrations of operations inflicted on animals, which are freely circulated by post, advertisement, or otherwise, are in many cases Calculated to mislead the public, so far as they suggest that the animals in question wore not under an ancesthetic. To represent that animals subjected to experiments in this country are wantonly tortured would, in our opinion, be absolutely false."

The Commissioners then proceed to the general history of recent medical science, in relation to experiments on animals. They go over the familiar facts which we all know ; the victories won or half-won over diphtheria, rabies, malaria, yellow fever, and other diseases : the blotting out of Malta fever, the preventive treatment against plague, lockjaw, and so forth ; the work of Lister; these and the like blessings of the last thirty years. They do not omit to say, what great advantages have been given, by the help of experiments on animals, to the animal world. Anthrax, rinderpest, Texas cattle fever, glanders, swine erysipelas—these and other devastating diseases of the higher domestic animals are better understood, and better controlled, by methods learned through experiments on animals, than they were. It is certain, that our animals are the gainers by our experiments on animals : and it is a pity, that the Report says nothing of Nuttall's recent work on the cause and cure of malignant jaundice in dogs, nor of Copeman's recent work on the pro- tective treatment of dogs against distemper.

The Commissioners then deal with the question, how far immunity from pain, in experiments on animals, is or can be secured. They recognize that antesthetics can secure com- plete insensibility to pain: and they recognize that morphia, chloral, and the like drugs, in sufficiently heavy doses, are not mere narcotics but veritable auresthetice. It is a matter of dosage. They go on to consider the pain involved in inoculations and similar procedures, which are 95 per cent. of all experiments on animals in this country. They say, very truly, that it is clear that in the large majority of these inoculations the animals do not appear to suffer pain : but they emphasize the fact that some inoculations do cause pain. The animals used for inoculation, in the vast majority of cases, are mice, rats, or guinea-pigs.

Coming to the point of view of ethics, the Commissioners are agreed "that experiments upon animals, adequately safe- guarded by law faithfully administered, are morally justifiable, and should not be prohibited by legislation." Then, they make certain recommendations which they believe to be cal- culated to secure more effectually the objects aimed at by the Act. They recommend that there should be four whole-time Inspectors for Great Britain, instead of two Inspectors : this is only fair, seeing how the Inspectors' work is very much greater than it was at the time of the passing of the Act. They recommend special restriction of the use of curare : this is not important, because curare is so rarely used at all, and is never used except in conjunction with an amssthetio. They recommend more restriction in the case of animals found to be in obvious suffering, or likely to remain in severe pain, after an experiment. Such animals must be killed, even though the object of the experiment has not been attained. They recommend a change of the advisory body of the Home Office : and it is certain that the public, so long as the Home Office has good advisers, will not mind whence it gets them.

Over this deliberate, moderate, and authoritative Report, signed by all the Commissioners, after eighteen months given to the hearing and publishing of 21,761 questions and answers, and after four years given to the business of agreeing together—over this final Report, let the extremists fight, if they feel fighting to be necessary. The public, surely, will not care to join in the fray. Greater affairs are in the public mind, and in the public heart. There is heavier fighting for those of us who are neither licensees nor anti-vivisectionists: there is worse trouble threatening the country than experi- ments on animals. Let us leave physiology to the physio- logists, pathology to the pathologists, and the affairs of the Home Office to the authorities at the Home Office : and let us give our thoughts to what is really the business of the nation.