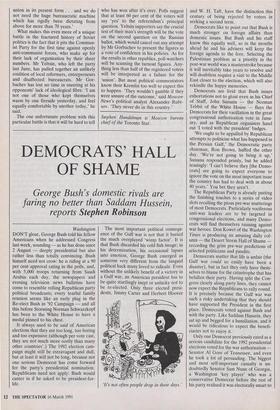 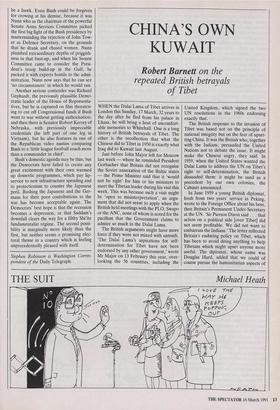 Washington DON'T gloat, George Bush told his fellow Americans when he addressed Congress last week, sounding— as he has done since 2 August — deeply presidential but also rather less than totally convincing. Bush himself need not crow: he is riding at a 90 per cent approval rating in the polls, and, with 5,000 troops returning from Saudi Arabia each day, the newspapers and evening television news bulletins have come to resemble rolling Republican party political broadcasts; every tearful family reunion seems like an early plug in the Re-elect Bush in '92 Campaign — and all this before Storming Norman Schwarzkopf has been to the White House to have a medal pinned to his chest.

It always used to be said of American elections that they are too long, too boring and too expensive (although per vote cast, they are not much more costly than many other countries'.) The 1992 election cam- paign might still be extravagant and dull, but at least it will not be long, because not one serious Democrat has come forward for the party's presidential nomination. Republicans need not apply: Bush would canter in if he asked to be president-for- life. The most important political consequ- ence of the Gulf war is not that it buried the much overplayed 'wimp factor'. It is that Bush discarded his cold fish image; in his determination, his occasional lapses into emotion, George Bush emerged as someone very different from the languid political hack many loved to ridicule. Even without the unlikely benefit of a victory in a Gulf war, an American president has to be quite startlingly inept or unlucky not to be re-elected. Only three elected presi- dents, Jimmy Carter and Herbert Hoover 'It's not often people drop in these days.' and W. H. Taft, have the distinction this century of being rejected by voters in seeking a second term.

Democrats like to point out that Bush is much stronger on foreign affairs than domestic issues. But Bush and his staff know this equally well, so in the months ahead he and his advisers will keep the foreign agenda to the fore. Selecting the Palestinian problem as a priority in the post-war world was a masterstroke because it will inevitably take years to resolve and will doubtless require a visit to the Middle East closer to the election, which will also rekindle the happy memories.

Democrats are livid that Bush issues exhortations not to gloat even as his Chief of Staff, John Sununu — the Norman Tebbit of the White House — flays the Democrats for their vacillation in the great congressional authorisation vote in Janu- ary, and as Republican organisers hand out '1 voted with the president' badges.

'We ought to be appalled by Republican attempts to politicise what has happened in the Persian Gulf,' the Democratic party chairman, Ron Brown, huffed the other day. 'We're not going to bring it up,' Sununu responded primly, but he added teasingly: 'I can't believe they [the Demo- crats] are going to expect everyone to ignore the vote on the most important issue the country has had to deal with in about 40 years.' You bet they aren't.

The Republican Party is already putting the finishing touches to a series of video slots recalling the pious pre-war mutterings of most Democrats. Particularly vociferous anti-war leaders are to be targeted in congressional elections, and many Demo- crats will find themselves running against war heroes. Don Kowet of the Washington Times is producing an amusing daily col- umn — the Desert Storm Hall of Shame — recording the grim pre-war predictions of selected politicians and pundits.

Democrats mutter that life is unfair (the Gulf war could so easily have been a disaster), but in fact they only have them- selves to blame for the catastrophe that has befallen their party. Having split the Con- gress clearly along party lines, they cannot now expect the Republicans to rally round. It is precisely because the Gulf war was such a risky undertaking that they should have supported the President in the first place. Democrats voted against Bush and with the party. Like Saddam Hussein, they sat up and begged for a humiliation, and it would be ridiculous to expect the benefi- ciaries not to enjoy it.

Only one Democrat previously rated as a serious candidate for the 1992 presidential elections voted for the war authorisation — Senator Al Gore of Tennessee, and even he took a lot of persuading. The biggest and most self-important casualty is un- doubtedly Senator Sam Nunn of Georgia, a Washington 'key player' who was a conservative Democrat before the rest of his party realised it was electorally smart to be a hawk. Even Bush could be forgiven for crowing at his demise, because it was Nunn who as the chairman of the powerful Senate Arms Services Committee picked the first big fight of the Bush presidency by masterminding the rejection of John Tow- er as Defence Secretary, on the grounds that he drank and chased women. Nunn plumbed extraordinary depths of priggish- ness in that bust-up, and when his Senate Committee came to consider the Presi- dent's troop build-up in the Gulf, he packed it with experts hostile to the admi- nistration. Nunn now says that he can see 'no circumstances' in which he would run.

Another serious contender was Richard Gephardt, the previously plausible Demo- cratic leader of the House of Representa- tives, but he is captured on film threaten- ing to cut off Congressional funds if Bush went to war without getting authorisation; and then there is Senator Robert Kerrey of Nebraska, with previously impeccable credentials (he left part of one leg in Vietnam), but he also features in one of the Republican video nasties comparing Bush to a 'little league football coach more than a commander in chief.

Bush's domestic agenda may be thin, but the Democrats have failed to create any great excitement with their own warmed up domestic programmes, which pay lip- service to new infrastructure spending and to protectionism to counter the Japanese peril. Bashing the Japanese and the Ger- mans for their poor contributions to the war has become acceptable again. The Democrats' best hope is that the recession becomes a depression, or that Saddam's downfall clears the way for a filthy Shi'ite fundamentalist regime. The second possi- bility is marginally more likely than the first, but neither seems a promising elec- toral theme in a country which is feeling unprecedentedly pleased with itself.

Stephen Robinson is Washington Corres- pondent of the Daily Telegraph.