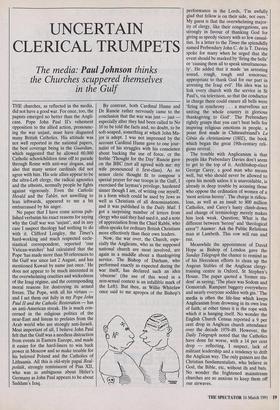 the Churches scuppered themselves in the Gulf

THE churches, as reflected in the media, did not have a good war. For once, too, the papists emerged no better than the Angli- cans. Pope John Paul II's vehement opposition to the allied action, pronounc- ing the war unjust, must have disgusted many British Catholics. His attitude was not well reported in the national papers, the best coverage being in the Guardian, which suggested that he allowed 60,000 Catholic schoolchildren time off to parade through Rome with anti-war slogans, and also that many senior cardinals did not agree with him. His sole allies appear to be the ultra-Left clergy, the radical agnostics and the atheists, normally people he fights against vigorously. Even the Catholic Herald and the Tablet, not unwilling to lean leftwards, appeared to me a bit embarrassed by his anger. No paper that I have come across pub- lished verbatim his exact reasons for saying why the Gulf war was 'unjust', and in any case I suspect theology had nothing to do with it. Clifford Longley, the Times's hard-working and much respected eccle- siastical correspondent, reported `one Vatican-watcher' had calculated that the Pope `has made more than 50 references to the Gulf war 'since last 2 August, and has mentioned Kuwait by name just once.' He does not appear to be much interested in the overwhelming cruelties and wickedness of the Iraqi regime, and the corresponding moral reasons for destroying its armed forces. The Pope, with all his virtues — and I set them out fully in my Pope John Paul II and the Catholic Restoration — has an anti-American streak. He is much con- cerned in the religious politics of the near-East and listens to prelates from the Arab world who are strongly anti-Israeli. Most important of all, I believe John Paul felt that the Gulf was a needless distraction from events in Eastern Europe, and made it easier for the hard-liners to win back power in Moscow and so make trouble for his beloved Poland and the Catholics of Lithuania. All this is old-style papal Real- politik, strongly reminiscent of Pius XII, who was as ambiguous about Hitler's Germany as John Paul appears to be about Saddam's Iraq. By contrast, both Cardinal Hume and Dr Runcie rather nervously came to the conclusion that the war was just — just — especially after they had been called to No 10 to be told the facts and, no doubt, to be soft-soaped, something at which John Ma- jor is adept. I was not impressed by the account Cardinal Hume gave to one jour- nalist of his struggles with his conscience about backing the use of force, or the feeble 'Thought for the Day' Runcie gave on the BBC (not all agreed with me: my wife pronounced it first-class). As no senior cleric thought fit to compose a special prayer for our troops in the Gulf, I exercised the layman's privilege, hardened sinner though I am, of writing one myself, in a form which could be used by Jews as well as Christians of all denominations, and it was published in the Daily Mail. I got a surprising number of letters from clergy who said they had used it, and a note of appreciation from the Chief Rabbi, who often speaks for ordinary British Christians more effectively than their own leaders.

Now, the war over, the Church, espe- cially the Anglicans, who as the supposed national church are most involved, are again in a muddle about a thanksgiving service. The Bishop of Durham, who performed exactly as expected during the war itself, has declared such an idea `obscene' (the use of this word in a non-sexual context is an infallible mark of the Left). But then, as Willie Whitelaw once said to me apropos of the Bishop's performance in the Lords, 'I'm awfully glad that fellow is on their side, not ours.' My guess is that the overwhelming major- ity of clergy, like their congregations, are strongly in favour of thanking God for giving us speedy victory with so few casual- ties. In a letter to the Times the splendidly named Prebendary John C. de la T. Davies spoke for many when he urged that the event should be marked by 'firing the bells' or 'causing them all to speak simultaneous- ly'. He added that it made 'an arresting sound, rough, tough and sonorous; appropriate to thank God for our part in arresting the Iraqi evil'. His idea was to link every church with the service in St Paul's, via television, so that the conductor in charge there could ensure all bells were 'firing in synchrony . . . a marvellous act uniting the whole country in glorious thanksgiving to God'. The Prebendary rightly grasps that you can't beat bells for inspiring religious emotions in people, a point first made in ChAteaubriand's Le Genie du chrlstianisme (1802), the book which began the great 19th-century reli- gious revival.

The trouble with Anglicanism is that people like Prebendary Davies don't seem to get to the top of it. Archbishop-elect George Carey, a good man who means well, but who should never be allowed to open his mouth unless it is unavoidable, is already in deep trouble by accusing those who oppose the ordination of women of a 'most serious heresy'. The charge is ridicu- lous, as well as an insult to 800 million Catholics, and Carey's hasty climb-down and change of terminology merely makes him look weak. Question; What is the different between `heresy' and 'theological error'? Answer: Ask the Public Relations man at Lambeth. This row will run and run.

Meanwhile the appointment of David Hope as Bishop of London gave the Sunday Telegraph the chance to remind us of his Herculean efforts to clean up the Augean Stables of the Anglican clergy- training centre in Oxford, St Stephen's House. The paper quoted a 'former stu- dent' as saying; `The place was Sodom and Gomorrah. Rampant buggery everywhere and nearly everyone sodden with gin.' The media is often the life-line which keeps Anglicanism from drowning in its own loss of faith; at other times it is the rope with which it is hanging itself. No wonder the English Church Census reported a 9 per cent drop in Anglican church attendance over the decade 1979-89. However, the Daily Telegraph noted that the Catholics have done far worse, with a 14 per cent drop — reflecting, I suspect, lack of militant leadership and a tendency to drift the Anglican way. The only gainers are the Christian fundamentalists, who believe in God, the Bible, etc, without ifs and buts. No wonder the frightened mainstream churches are so anxious to keep them off our airwaves.