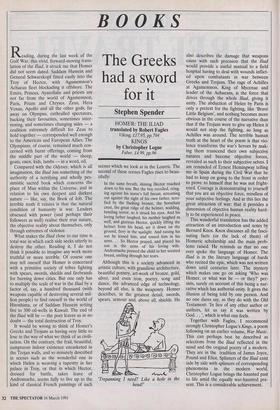 The Greeks had a sword for it

Reading, during the last week of the Gulf War, this vivid, forward-moving trans- lation of the Iliad, it struck me that Homer did not seem dated. Saddam Hussein and General Schwarzkopf fitted easily into the Troy of Hector, with Agamemnon's Achaean fleet blockading it offshore. The Emirs, Princes, Ayatollahs and priests are not far from the world of Agamemnon, Paris, Priam and Chryses. Zeus, Hera Venus, Apollo and all the other gods, far away on Olympus, enthralled spectators, backing their favourites, sometimes inter- vening, and sometimes changing sides — a coalition extremely difficult for Zeus to hold together — corresponded well enough to the American and European Allies. The Olympians, of course, remained much con- cerned with burnt offerings, coming from the middle part of the world — sheep, goats, oxen, kids, lambs — in a word, oil.

Compared with the Odyssey, which is all imagination, the Iliad has something of the authority of a terrifying and wholly pes- simistic sacred book which concerns the place of Man within the Universe, and in relation to his own deepest and darkest nature — like, say, the Book of Job. The terrible truth it relates is that the natural condition of humanity is war. Leaders obsessed with power (and perhaps their followers as well) realise their true nature, the objective reality about themselves, only through extremes of violence.

What makes the Iliad close to our time is total war in which each side seeks utterly to destroy the other. Reading it, I do not think it possible to imagine any work more truthful or more terrible. Of course one may tell oneself that Homer is concerned with a primitive society of tribes fighting with spears, swords, shields and firebrands for burning down cities. But one only has to multiply the scale of war in the Iliad by a factor of, say, a hundred thousand (with weapons capable of destroying several mil- lion people) to find oneself in the world of Hiroshima, or of Saddam Hussein setting fire to 300 oil-wells in Kuwait. The end of the Iliad will be — the poet leaves us in no doubt — the total destruction of Troy.

It would be wrong to think of Homer's Greeks and Trojans as having very little to lose in the way of what we think of as civili- sation. On the contrary, the frail, beautiful, sumptuous indoor existence encasketed in the Trojan walls, and so minutely described in scenes such as the wonderful one in which Helen is weaving a tapestry in her palace in Troy, or that in which Hector, dressed for battle, takes leave of Andromache, seems fully to live up to the kind of classical French paintings of such scenes which we look at in the Louvre. The second of these scenes Fagles rises to beau- tifully:

In the same breath, shining Hector reached down to his son. But the boy recoiled, cring- ing against his nurse's full breast, screaming out against the sight of his own father, terri- fied by the flashing bronze, the horsehair crest, the great ridge of the helmet, nodding, bristling terror, so it struck his eyes. And his loving father laughed, his mother laughed as well, and glorious Hector, quickly lifting the helmet from his head, set it down on the ground, fiery in the sunlight. And raising his son he kissed him, and tossed him in his arms. . . So Hector prayed, and placed his son in the arms of his loving wife. Andromache pressed the child to her scented breast, smiling through her tears.

Although this is a society advanced in artistic culture, with grandiose architecture, beautiful pottery, art-work of bronze, gold, silver, and even iron, poetry, song and dance, the advanced edge of technology, beyond all else, is the weaponry. Homer describes, in the greatest detail, swords, spears, armour and, above all, shields. He 'Trepanning I need? Like a hole in the head!' also describes the damage that weapons cause with such precision that the Iliad would provide a useful manual to a field hospital having to deal with wounds inflict- ed upon combatants in war between Greeks and Trojans. The rage of Achilles at Agamemnon, King of Mycenae and leader of the Achaeans, is the force that drives through the whole Iliad, giving it unity. The abduction of Helen by Paris is only a pretext for the fighting, like 'Brave Little Belgium', and nothing becomes more obvious in the course of the narrative than that if the Trojans were to give up Helen it would not stop the fighting, so long as Achilles was around. The terrible human truth at the heart of the poem is that vio- lence transforms the war's heroes by mak- ing them transcend their own subjective natures and become objective forces, revealed as such to their subjective selves. I am reminded of Ernest Hemingway telling me in Spain during the Civil War that he had to keep on going to the front in order to prove to himself that he was not fright- ened. Courage is demonstrating to yourself that you are an objective force, mindless of your subjective feelings. And in this lies the great attraction of war: that it provides a dimension of objective human reality hard- ly to be experienced in peace.

This wonderful translation has the added attraction of an introduction and notes by Bernard Knox. Knox discusses all the fasci- nating facts (or the lack of them) of Homeric scholarship and the main prob- lems raised. He reminds us that no one ever spoke the language of Homer. The Iliad is in the literary language of bards who recited the epic, which was not written down until centuries later. The mystery which makes one go on asking 'Who was Homer, or what was he — or they?' per- sists, surely on account of this being a nar- rative which has authorial unity. It gives the illusion of being told by one person. And no• one dares say, as they do with the Old Testament: 'In lieu of any other author or authors, let us say it was written by God.. . ', which is what one feels.

Together with Fagles, I recommend strongly Christopher Logue's Kings, a poem following on an earlier volume, War Music. This can perhaps best be described as selections from the Iliad reflected in the mind and the original poetry of a modern. They are in the tradition of James Joyce, Pound and Eliot. Splinters of the Iliad exist side by side with splinters of corresponding phenomena in the modern world. Christopher Logue brings the haunted past to life amid the equally war-haunted pre- sent. This is a considerable achievement.