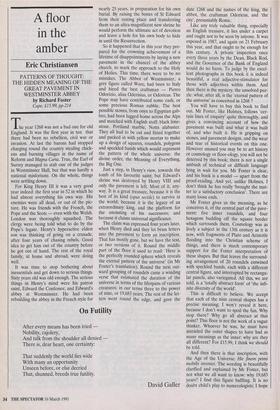 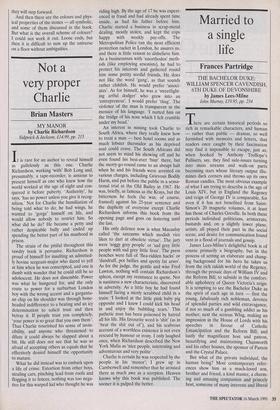 A floor in the amber

PATTERNS OF THOUGHT: THE HIDDEN MEANING OF THE GREAT PAVEMENT IN WESTMINSTER ABBEY by Richard Foster Cape, £15.99, pp.2I4 he year 1268 was not a bad one for old England. It was the first year in ten that there had been no rebellion, civil war or invasion. At last the barons had stopped charging round the country stealing chick- ens and burning villages in the name of Reform and Magna Carta. True, the Earl of Surrey managed to stab one of the judges in Westminster Hall, but that was hardly a national misfortune. On the whole, things were settling down. For King Henry III it was a very good year indeed: the first year in 52 in which he had almost everything his own way. His enemies were all dead, or out of the pic- ture. He was friends with the French, the Pope and the Scots — even with the Welsh. London was thoroughly squashed. The clergy were being told what to do by the Pope's legate. Henry's hyperactive eldest son was thinking of going on a crusade, after four years of chasing rebels. Good idea to get him out of the country before he got out of hand. The rest of the royal family, at home and abroad, were doing well.

It was time to stop bothering about inessentials and get down to serious things. Sixty years old was old enough. The serious things in Henry's mind were his patron saint, Edward the Confessor, and Edward's abbey at Westminster. He had been rebuilding the abbey in the French style for nearly 25 years, in preparation for his own burial. By raising the bones of St Edward from their resting place and transferring them to an ultra-magnificent new shrine he would perform the ultimate act of devotion and leave a hole for his own body to hide in until the Resurrection.

So it happened that in this year they pre- pared for the crowning achievement of a lifetime of disappointments by laying a new pavement in the chancel of the abbey church, to mark the approach to the Holy of Holies. This time, there were to be no mistakes. The Abbot of Westminster, a grey figure called Ware, had been to Italy and hired the best craftsman — Pietro Odorizio, alias Oderisius, or Odoricus. The Pope may have contributed some cash, or some precious Roman rubble. The best possible stones, from onyx to Egyptian gab- bro, had been lugged home across the Alps and matched with English stuff: black lime- stone, Portland marble, Notts alabaster. They all had to be cut and fitted together and packed in with yellow mortar to make up a design of squares, roundels, polygons and speckled bands which would represent the pattern of the whole universe: the divine order, the Meaning of Everything, the Big One.

Just a step, in Henry's view, towards the tomb of his favourite saint; but Edward's shrine was destroyed by Henry VIII and only the pavement is left. Most of it, any- way. It is a great treasure, because it is the best of its kind (opus sectile) to survive in the world; because it is the legacy of an extraordinary king, and the platform for the anointing of his successors; and because it claims universal significance.

The claim was expressed four years later, when Henry died and they let brass letters into the pavement to form an inscription. That has mostly gone, but we have the text, or two versions of it. Round the middle part of the floor it used to read: 'Here is the perfectly rounded sphere which reveals the eternal pattern of the universe' (in Mr Foster's translation). Round the next out- ward grouping of roundels came a winding verse that estimated the duration of the universe in terms of the lifespans of various creatures: in our terms three to the power of nine, or 19,683 years. The rest of the let- ters went round the edge, and gave the date 1268 and the names of the king, the abbot, the craftsman Odoricus, and 'the city', presumably Rome.

Like any truly valuable thing, especially an English treasure, it lies under a carpet and ought not to be seen by anyone. It was exposed in 1987, and again on 21 February this year, and that ought to be enough for this century. A private inspection once every three years by the Dean, Black Rod, and the Governor of the Bank of England would do no harm. To judge by the excel- lent photographs in this book it is indeed beautiful, a real adjective-stimulator for those with adjectives within them. And then there is the mystery, the unsolved puz- zle: what, after all, is the 'eternal pattern of the universe' as conceived in 1268 ?

You will have to buy this book to find out. Mr Foster, like Holmes, follows 'cer- tain lines of enquiry' quite thoroughly, and gives a convincing account of how the pavement was built and what it was built of, and who built it. He is gripping on stones, and pavement designs, and the wear and tear of historical events on this one. However unused you may be to art history or cosmology or floor-ology, you will not be deterred by this book; there is not a single ambush of technical or difficult language lying in wait for you. Mr Foster is clear, and his book is a model — apart from the proof-reading. And yet, unlike Holmes, I don't think he has really 'brought the mat- ter to a satisfactory conclusion'. There are many loose ends.

Mr Foster gives us the meaning, as he conceives it, of the central part of the pave- ment: five inner roundels, and four hexagons budding off the square border which surrounds them. Cosmology was as lively a subject in the 13th century as it is now, with fragments of Plato and Aristotle flooding into the Christian scheme of things, and there is much contemporary support for the Foster interpretation of these shapes. But that leaves the surround- ing arrangement of 20 roundels entwined with speckled bands, each with a different central figure, and interrupted by rectangu- lar panels, also variegated. All this, we are told, is a 'totally abstract form' of 'the infi- nite diversity of the world'.

This is difficult to believe. We accept that each of the nine central shapes has a precise meaning; I won't reveal it here, because I don't want to spoil the fun. Why stop there? Why go all abstract at that point? This floor is not the work of a vague thinker. Whoever he was, he must have intended the outer shapes to have had as many meanings as the inner: why are they all different? For £15.99, I think we should be told.

And then there is that inscription, with the Age of the Universe: Hic finem primi mobilis inveniet. The wording is beautifully clarified and explained by Mr Foster, but not what we all want to know: why 19,683 years? I find this figure baffling. It is no doubt child's play to numerologists; I hope

they will step forward.

And then there are the colours and phys- ical properties of the stones — all symbolic, and some of them discussed in the book. But what is the overall scheme of colours? I could not work it out. Loose ends, but then it is difficult to sum up the universe on a floor without ambiguities.