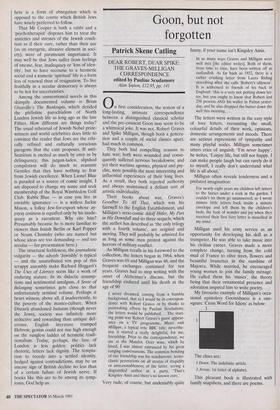 Goon, but not forgotten

DEAR ROBERT, DEAR SPIKE: THE GRAVES-MILLIGAN CORRESPONDENCE edited by Pauline Scudamore Alan Sutton, £12.95, pp. 141 On first consideration, the notion of a long-lasting, intimate cbrrespondence between a distinguished classical scholar and the pre-eminent Goon may seem to be a whimsical joke. It was not. Robert Graves and Spike Milligan, though born a genera- tion and a couple of social classes apart, had much in common.

They both had compelling reasons to hate war; both were wounded and conse- quently suffered nervous breakdowns; and yet their wartime agonies, physical and psy- chic, were possibly the most interesting and influential experiences of their long lives. As a result, they both rejected authority and always maintained a defiant sort of artistic individuality.

Their books about war, Graves's Goodbye To All That, which was his farewell to the English Establishment, and Milligan's serio-comic Adolf Hitler, My Part in His Downfall and its three sequels, which the author has described as 'the only trilogy with a fourth volume', are original and moving. They will probably be admired for as long as some men protest against the horrors of military conflict.

As Milligan recalls in his foreword to the collection, the letters began in 1964, when Graves was 69 and Milligan was 46, and the frequent exchanges continued for ten years. Graves had to stop writing with the onset of Alzheimer's disease, but the friendship endured until his death at the age of 90:

I never dreamed, coming from a humble background, that a) I would he in correspon- dence with Robert Graves or b) thanks to painstaking efforts by Pauline Scudamore, the letters would be published. . . The start- ing point was Robert Graves's guest appear- ance on a TV programme, Muses with Milligan, a typical trite BBC title; neverthe- less it started a really delightful, for me, friendship. Prior to the correspondence, we ate at the Matelot. Over wine, which he loved, I was almost entranced by his great ranging conversations. The common bonding of our friendship was his mischievous, icono- clastic perorations on all stratas of stupidity or unreasonableness; of the latter, seeing a disgruntled author at a party, 'That's Kingsley Amis and there's no known cure.'

Very rude, of course, but undeniably quite

In so many ways Graves and Milligan were well met [the editor writes]. Both of them, from time to time, have been written off as outlandish. As far back as 1932, there is a rather crushing letter from Laura Riding describing what she calls 'Robert's sillyness'. It is addressed to friends of his back in England: 'this is a very not putting down let- ter, but you ought to know that Robert lost 250 pesetas AND his wallet in Palma yester- day, and he also dropped the butter down the well this morning. ..

The letters were written in the easy style of love letters, recounting the small, colourful details of their work, opinions, domestic arrangements and moods. There are serious expressions of sympathy and many playful asides. Milligan sometimes utters cries of anguish. 'I'm never happy', he writes, 'I enjoy life, but still not happy, I can make people laugh but can rarely do it to myself, I really don't understand what life is all about.'

For nearly eight years my children left letters to the fairies under a rock in the garden. I couldn't let them go unanswered, so I wrote minute little letters back inside a minute envelope and left them by the children's beds; the look of wonder and joy when they received their first fairy letter is stencilled in my mind. . .

Milligan used his army service as an opportunity for developing his skill as a trumpeter. He was able to take music into his civilian career. Graves made a more complete change, turning from the cold mud of France to olive trees, flowers and beautiful brunettes in the sunshine of Majorca. While married, he encouraged young women to join the family ménage. He called them his 'muses', the theory being that their ornamental presence and adoration inspired him to write poetry.

My favourite example of Milligan's occa- sional epistolary Goonishness is a one- square 'Cross Word for Idiots' as below: The clues are:

1 Down. The indefinite article. 1 Across. 1st letter of alphabet.

This pleasant book is illustrated with family snapshots, and there are poems.