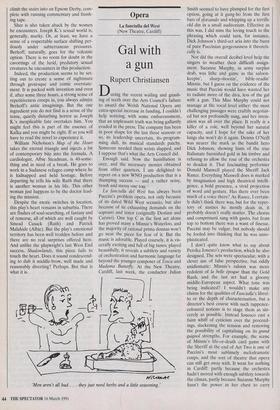 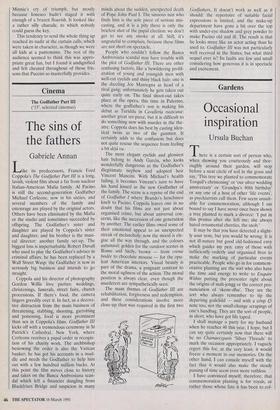 Gal with a gun

Dufing the recent wailing and gnash- ing of teeth over the Arts Council's failure to award the Welsh National Opera any extra-special increase in funding, I couldn't help noticing, with some embarrassment, that an unpleasant truth was being gallantly evaded in the press. The company has been in poor shape for the last three seasons or so, its leadership uncertain, its program- ming dull, its musical standards patchy. Someone needed their wrists slapped, and I suppose that's what the Arts Council did.

Enough said. Now the humiliation is over, and the necessary monies obtained from other quarters, I am delighted to report on a new WNO production that is a thumping success — and a rather noisy, brash and messy one top: La fanciulla del West has always been Puccini's problem opera, not only because of its dated Wild West scenario, but also because of its exhausting demands on the • soprano and tenor (originally Destinn and Caruso). One top C in the first act alone has proved many a Minnie's Waterloo, and the majority of rational prima donnas won't go near the piece for fear of it. But the music is adorable. Played coarsely, it is vis- cerally exciting and full of big tunes; played beautifully, it reveals a subtlety and variety of orchestration and harmonic language far beyond the younger composer of Tosca and Maciama Butterfly. At the New Theatre, Cardiff, last week, the conductor Julian Smith seemed to have plumped for the first option, going at it gung-ho from the first bars of sforzando and whipping up a terrific old din in a small auditorium. Effective as this was, I did miss the loving touch to the phrasing which could turn, for instance, Dick Johnson's third-act aria into the burst of pure Puccinian gorgeousness it theoreti- cally is.

Nor did the overall decibel level help the singers to weather their difficult assign- ment. Suzanne Murphy, in army surplus drab, was lithe and game as the saloon-

keepi n', sharp-shootin', bible-readin' Minnie, but I guess on the evidence of the music that Puccini would have wanted her to radiate more of the diva, less of the gal with a gun. This Miss Murphy could not manage at the vocal level either: the most challenging passages were craftily negotiat- ed but not profoundly sung, and her inton- ation was all over the place. It really is a killer of a role, well beyond her natural capacity, and I hope for the sake of her lungs she won't do it again. Dennis O'Neill was nearer the mark as the bandit hero Dick Johnson, showing hints of the true Italianate burnished gold in his timbre and refusing to allow the roar of the orchestra to deaden it. That fascinating performer Donald Maxwell played the Sheriff Jack Rance. Everything Maxwell does is marked by imagination and high theatrical intelli- gence, a bold presence, a vivid projection of word and gesture. Has there ever been much of a voice there? As Rance, I certain- ly didn't think there was, but for the reper- tory of nasties he mostly deals in, it probably doesn't really matter. The chorus and comprimarii sang with gusto, but from top to bottom there was a want of finesse. Puccini may be vulgar, but nobody should be fooled into thinking that he was unso- phisticated.

I don't quite know what to say about Petrika Ionesco's production, which he also designed. The sets were spectacular, with a clever use of false perspective, but oddly unidiomatic: Minnie's saloon was more redolent of la belle époque than the Gold Rush, and the last act had a gloomy middle-European aspect. What tone was being indicated? I wouldn't make any claims for the qualities of Fanciulia's libret- to or the depth of characterisation, but a director's best course with such tuppence- coloured notions is to stage them as sin- cerely as possible. Instead Ionesco cast a faint whiff of cynicism over the proceed- ings, slackening the tension and removing the possibility of capitalising on its grand guignol strengths. For example, the scene of Minnie's life-or-death card game with the Sheriff at the end of Act Two is one of Puccini's most sublimely melodramatic coups, and the sort of theatre that opera can still get away with. It went for nothing in Cardiff: partly because the orchestra hadn't moved with enough subtlety towards the climax, partly because Suzanne Murphy hasn't the power in her chest to carry

Minnie's cry of triumph, but mostly because Ionesco hadn't staged it with enough of a brazen flourish. It looked like a rather silly charade, to which nobody could guess the key.

This tendency to send the whole thing up reached its nadir at the curtain calls, which were taken in character, as though we were all kids at a pantomime. The rest of the audience seemed to think this was appro- priate great fun, but I found it undignified and felt cheated throughout of those fris- sons that Puccini so masterfully provides.