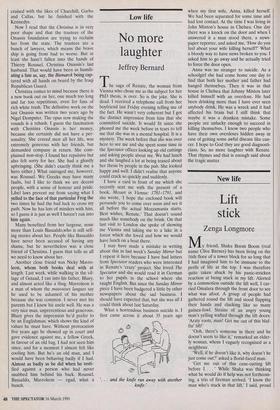 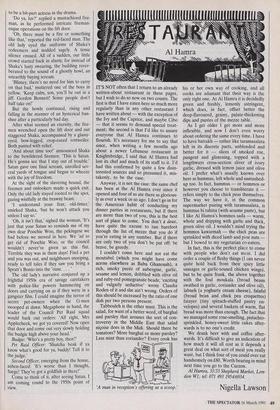 'Ooh, there's someone in there and he doesn't seem to like it,' remarked an elder- ly woman, whom I vaguely recognised as a neighbour.

'Well, if he doesn't like it, why doesn't he just come out?' asked a florid-faced man.

'Get me out of this cane-cutting lift before I. . ' While Shaka was thinking what he would do if help was not forthcom- ing, a trio of fireman arrived. 'I know the man who's stuck in that lift,' I said, proud to be a bit-part actress in the drama. 'Do ya, luv?' replied a mustachioed fire- man, as he performed intricate fireman- esque operations on the lift door.

`Oh, there must be a fire or something like that,' reported the red-faced man. The old lady eyed the uniforms of Shaka's redeemers and nodded sagely. A tense silence ensued. All of a sudden, our little crowd started back in alarm; for instead of Shaka's lusty swearing, the building rever- berated to the sound of a ghostly howl, an unearthly baying scream.

'Blimey, there's no need for him to carry on that bad,' muttered one of the boys in yellow. 'Keep calm, son, you'll be out in a jiff. Gordon Bennett! Some people don't half take on!'

But the howls continued, rising and falling in the manner of an hysterical ban- shee after a particularly bad day.

After what seemed an eternity, the fire- men wrenched open the lift door and out staggered Shaka, accompanied by a glassy- eyed, bow-legged, crop-eared rottweiler. Both panted with relief.

'And about time too!' announced Shaka to the bewildered firemen. 'This is Satan. He's gonna see that I stay out of trouble.' Satan gave one final scream, unrolled sev- eral yards of tongue and began to wheeze with the joy of freedom.

At the sight of the slavering hound, the firemen and onlookers made a quick exit. Only the old lady stayed rooted to the spot, gazing wistfully at the brawny beast. 'I understand your fear, old-timer,' smirked Shaka, 'but he won't attack you unless I say so.' 'Oh, it isn't that,' sighed the woman, 'It's just that your Satan so reminds me of my own dear Poochie Woo, the pekingese we had before we moved in here. We 'ad to get rid of Poochie Woo, or the council wouldn't never've given us this flat. Terrible they was in them days! Find a pet and you was out, and neighbours snooping, ready to tell tales if they saw you bring a Spratt's Bonio into the 'ouse. . '

The old lady's narrative conjured up a frightful 1950s era of savage caretakers with police-like powers hammering on doors and carrying on as if they were in a gangster film. I could imagine the terror of secret pet-owners when the G-men swooped at dawn. Megaphone in hand, the leader of the Council Pet Raid squad would bark out orders: 'All right, Mrs Applecheek, we got ya covered! Now open that door and come out very slowly holding the budgie high above your head.'

Budgie: 'Who's a pretty boy, then?' Pet Raid Officer Shutcha beak if ya know what's good for ya, buddy! Tell it to the judge.'

Second Officer, emerging from the house, ashen-faced: 'It's worse than I thought, Sarge! They've got a goldfish in there!' Come to think of it, after seeing Satan, I am coming round to the 1950s point of view.