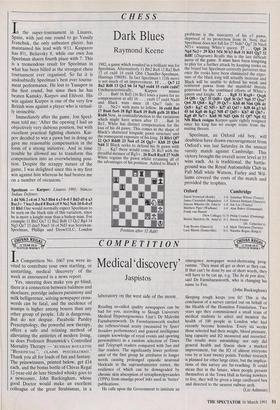 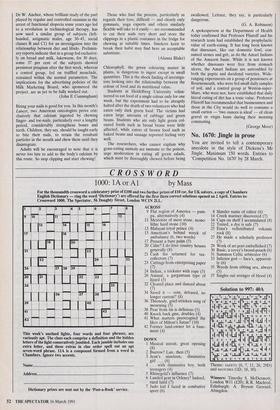 In Competition No. 1667 you were in- vited to contribute your own startling, or unstartling, medical 'discovery' of the week as announced in a news report.

Yes, sneezing does make you go blind, there is a connection between baldness and shoelaces, porridge induces parsimony and milk belligerence, solving newspaper cross- words can be fatal, and the incidence of mumps is higher among boxers than any other group of people. Life is dangerous. But do not despair. Parabolic Parsley Prescriptology, the powerful new therapy, offers a safe and relaxing method of alleviating the anxieties of modern living, as does Professor Brunswick's Controlled Mortality Therapy — 'RUSSIAN ROULETTE "BENEFICIAL", CLAIMS PSYCHIATRIST.'

Thank you all for loads of fun and fantasy. The prizewinners, printed below, get £14 each, and the bonus bottle of Chivas Regal 12-year-old de luxe blended whisky goes to a newcomer, John Buckingham, whose good Doctor would make an excellent colleague of the great Strabismus, in a

laboratory on the west side of the moon.

Reading so-called quality newspapers can be bad for you, according to Slough University Medical Hyperergonomics Unit's Dr Malcolm Famsbarnsworth. Dr Farnsbarnsworth studied the reflexes/visual acuity (measured by Space Invaders performance) and general intelligence (simple knowledge of royal events and sporting personalities) in a random selection of Times and Telegraph readers compared with Sun and Star readers. The significantly lower perform- ance of the first group he attributes to longer words causing prolonged episodic neuronal blockade in the suprasubanterior cortex, the resilience of which can be downgraded by chronic skin absorption of tetraphenylpyrazoles (TPPs) from smudge-proof inks used in 'better' publications.

He calls upon the Government to institute an

SCOTCH WHISKY B emergency newspaper word-shortening prog- ramme. 'They must all get as short as they can. If that can't be done by use of short words, they will have to be cut up, e.g. The In de pen dent,' said Dr Farnsbamsworth, who is changing his name to Fox.

(John Buckingham) Sleeping rough keeps you fit! This is the conclusion of a survey carried out on behalf of the Health of the Homeless Foundation. Two years ago they commissioned a small team of medical students to select and monitor the health of 100 people in London who had recently become homeless. Every six weeks those selected had their weight, blood pressure, lung capacity and IQ measured and recorded. The results were astonishing: not only did general health and fitness show a marked improvement, but the IQ of almost everyone rose by at least twenty points. Further research is planned for other large cities, but the implica- tions of this survey are far-reaching. It could mean that in the future, when people present themselves at the Town Hall as having nowhere to live, they will be given a large cardboard box and directed to the nearest railway arch.

(Liz Ashman) Dr W. Anchor, whose brilliant study of the part played by regular and controlled onanism in th8 arrest of functional alopecia some years ago led to a revolution in trichinological therapy, has now used a similar group of subjects (left- handed, astigmatic males, age 30-45, social classes B and Cl) for an investigation into the relationship between diet and libido. Prelimin- ary reports indicate that in a group fed exclusive- ly on bread and milk, lukewarm, for 30 days, some 37 per cent of the subjects showed persistent priapism after the first week, whereas a control group, fed on truffled mouclade, remained within the normal parameters. The implications for the advertising policies of the Milk Marketing Board, who sponsored the project, are as yet to be fully worked out.

(John E Cunningham) Biting your nails is good for you. In this month's Lancet, two American osteologists prove con- clusively that calcium ingested by chewing finger- and toe-nails, particularly over a lengthy period, considerably strengthens bones and teeth. Children, they say, should be taught early to bite their nails, to retain the resultant particles in the mouth and chew them until they disintegrate.

Adults will be encouraged to note that it is never too late to add to the body's calcium by this route. So stop clipping and start chewing! Those who find the process, particularly as regards their toes, difficult — and clearly only gymnasts, yoga experts and others similarly flexible will take to it easily — are recommended to cut their nails very short and store the clippings in a plastic container in the fridge for chewing at suitable times. Smokers keen to break their habit may find here an acceptable substitute.

(Alanna Blake) Chlorophyll, the green colouring matter in plants, is dangerous to ingest except in small quantities. This is the shock finding of investiga- tors looking into the relationship between the colour of food and its nutritional value.

Students at Heidelberg University volun- teered to eat food of a single colour only for one week, but the experiment had to be abruptly halted after the death of two volunteers who had eaten only dark green food. The victims had eaten large amounts of cabbage and green beans. Students who ate only light green col- oured foods such as broad beans were little affected, while eaters of brown food such as baked beans and sausage reported feeling very well.

The researchers, who cannot explain why grass-eating animals are immune to the poison, urge moderation in eating all green salads, which must be thoroughly chewed before being swallowed. Lettuce, they say, is particularly dangerous.

(G. A. Robinson) A spokesperson at the Department of Health today confirmed that Professor Flintoff and his research team had established the prophylactic value of earth-eating. It has long been known that dinosaurs, like our domestic fowl, con- sumed stones and grit, as do the Amari Indians of the Amazon basin. While it is not known whether dinosaurs were free from stomach ulcers, the Amari Indians are untroubled by both the peptic and duodenal varieties. Wide- ranging experiments on a group of pensioners at Bournemouth, who were fed small daily samples of soil, and a control group at Weston-super- Mare, who were not, have established that daily literal eating of dirt has a tonic value. Professor Flintoff has recommended that businessmen and those in the City would do well to consume a small carton — 'two ounces is ideal' — of clean gravel or virgin loam during their morning commuting.