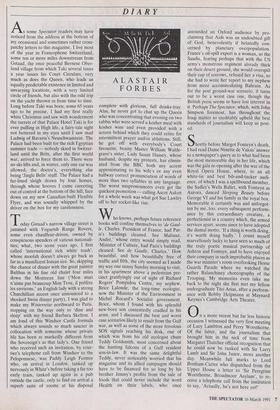 As some Spectator readers may have noticed from the address at the bottom of my occasional and sometimes rather cross- patchy letters to this magazine, I live most of the year in Francophone Switzerland. some ten or more miles downstream from Gstaad, the once peaceful Bernese Ober- land village from which Taki several times a year issues his Court Circulars, very much as does the Queen, who leads an equally predictable existence in limited and unvarying locations, with a very limited circle of friends, but also with the odd trip on the yacht thrown in from time to time. Long before Taki was born, some 65 years ago to be precise, I had my first really white Christmas and saw with wonderment the turrets of that Palace Hotel Taki is for ever puffing in High life, a fairy-tale sight not bettered in my eyes until I saw mad Ludwig of Bavaria's Neuschwanstein. The Palace had been built for the rich Egyptian summer trade — nobody skied in Switzer- land until the Brits, after the first world war, arrived to force them to. There were no ski-lifts and, in winter, only one car was allowed, the doctor's, everything else being 'Jingle Bells' stuff. The Palace had a fur-lined sleigh drawn by four horses, through whose hooves I came careering out of control at the bottom of the hill, face down on my new Canadian-built Flexible Flyer, and was soundly whipped by the driver on the box for my carelessness.

Today Gstaad's narrow village street is jammed with Vogueish Range Rovers, some even chauffeur-driven, owned by conspicuous spenders of various nationali- ties; what, two score years ago, I first called 'international rich white trash', whose moolah doesn't always go back as far as a munificent Ionian sire. So, skipping the chance of dinner with the great painter Balthus in his fine old chalet four miles down the Montreux line ('Mon mari n'aime pas beaucoup Mon Trou, il prefere les environs,' an English lady with a strong Churchillian accent once announced to a shocked Swiss dinner party), I was glad to make my Winterreise northward to Paris, stopping on the way only to 'dine and sleep' with my friend Barbara Skelton. I am fond of this Windsor Castle formula which always sounds so much saucier in collocation with someone whose private life has been as markedly different from the Sovereign's as that lady's. One friend who received such an invitation, by cour- tier's telephone call from Windsor to the Peloponnese, was Paddy Leigh Fermor who, on arrival in London, tanked up nervously in White's before taking a far too early train, tanked up again in a pub outside the castle, only to find on arrival a superb suite of rooms at his disposal ALASTAIR FORBES complete with glorious, full drinks-tray. Alas, he never got to chat up the Queen who was concentrating that evening on two rabbis who were served a kosher meal with kosher wine and even provided with a screen behind which they could retire for intermittent prayer and/or ablutions. Still, he got off with everybody's Court favourite, brainy Master William Walde- grave's sister, Lady Susan Hussey, whose husband, despite my protests, has elimin- ated from the BBC both any accent approximating to his wife's or any even halfway correct pronunciation of words of more than two syllables in any language. The worst mispronouncers even get the quickest promotion — calling Ascot Askott for a whole week was what got Sue Lawley off to her rocket-like rise.

Who knows, perhaps future reference books will confine themselves to 'de Gaul- le, Charles. President of France, had Par- is's buildings cleaned. See Malrawc, Andre,' whose entry would simply read, 'Minister of Culture, had Paris's buildings cleaned. See de Gaulle, Charles.' How beautiful, and how beautifully free of traffic and filth, the city seemed as I made my way one sunny Sunday morning to visit, in his apartment above a pedestrian pre- cinct gratifyingly out of sight of Richard Rogers' Pompidou Centre, my nephew, Brice Lalonde, the long-time ecologist, now the Minister of the Environment in Michel Rocard's Socialist government. Brice, whom I found with his splendid new-born son contentedly cradled in his arms, and I discussed the best and worst case scenarios likely to result from the Gulf war, as well as some of the more frivolous SOS signals reaching his desk, one of which was from his old ecologist chum Teddy Goldsmith, most concerned about the hunting falcons of a Gulf resident son-in-law. It was the same delightful Teddy, never noticeably worried that his magazine and its allied campaigns should have to be financed for so long by his brother Jimmy's profits from the sale of foods that could never include the word Health on their labels, who once astounded an Oxford audience by pro- claiming that Aids was an undoubted gift of God, benevolently if belatedly con- cerned by planetary overpopulation. France's oil-spill expert is a woman, so the Saudis, fearing perhaps that with the US army's monstrous regiment already thick on their desert ground, she would overspill their cup of sorrows, refused her a visa, so she had to write her report to my nephew from more accommodating Bahrain. As for the post ground-war scenario, it turns Out to be a worst case one, though the British press seems to have lost interest in it. Perhaps The Spectator, which, with John Simpson foremost, has throughout the Iraqi matter so creditably upheld the best standards of journalism will keep us post- ed.

Shortly before Margot Fonteyn's death, I had read Dame Ninette de Valois' answer to a newspaper's query as to what had been the most memorable day in her life, which was the gala re-opening after the war of the Royal Opera House, where, to an all white-tie and best bib-and-tucker audi- ence, of which I was a spellbound member, the Sadler's Wells Ballet, with Fonteyn as Aurora, danced Sleeping Beauty before George VI and his family in the royal box. Memorable it certainly was and unforgot- ten by me, too, every subsequent perform- ance by this extraordinary creature, a perfectionist in a country which, the armed services apart, seems since to have adopted the dismal motto, 'If a thing is worth doing, it's worth doing badly.' I count myself marvellously lucky to have seen so much of the truly poetic musical partnership of Ashton and Fonteyn, and to have enjoyed their company in such improbable places as the war minister's room overlooking Horse Guards Parade where we watched the rather Balanchiney choreography of the Trooping. My memories even take me back to the night she first met my fellow undergraduate Tito Arias, after a perform- ance with Bobby Helpmann at Maynard Keynes's Cambridge Arts Theatre.

0 n a more recent but far less historic occasion I witnessed the very first meeting of Lucy Lambton and Perry Worsthorne. Of the latter, and the journalism that brought him in the nick of time from Margaret Thatcher official recognition that he could now be ranked with Sir Larry Lamb and Sir John Junor, more another day. Meanwhile full marks to Lord Bonham-Carter who dispatched from the Upper House a letter to 'Sir Peregrine Worsthorne, Broadmoor Asylum', to re- ceive a telephone call from the institution to say, 'Actually, he's not here yet!'