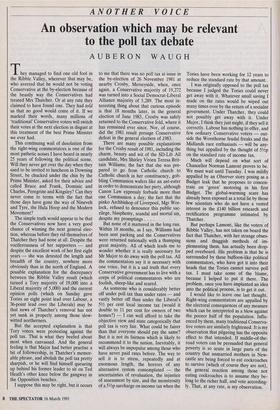 An observation which may be relevant to the poll tax debate

They managed to find one old fool in the Ribble Valley, wherever that may be, who averred that he would not be voting Conservative at the by-election because of the beastly way the Conservatives had treated Mrs Thatcher. Or at any rate they claimed to have found one. They had told us that no good would come of it. If we marked their words, many millions of 'traditional' Conservative voters will switch their votes at the next election in disgust at this treatment of the best Prime Minister we ever had.

This continuing wail of desolation from the right-wing commentators is one of the most pathetic noises I have heard in nearly 25 years of following the political scene. Will they never get over the day when they used to be invited to luncheon in Downing Street, be chucked under the chin by the Prime Minister, asked for their advice and called Bruce and Frank, Dominic and Charles, Peregrine and Kingsley? Can they never come to terms with the fact that those days have gone the way of Nineveh and Tyre, the Hula Hoop and the Modern Movement?

The simple truth would appear to be that the Conservatives now have a very good chance of winning the next general elec- tion, whereas before they rid themselves of Thatcher they had none at all. Despite the vociferousness of her supporters — and despite the excellent work of her first eight years — she was detested the length and breadth of the country, nowhere more obviously than in the north of England. A possible explanation for the discrepancy between the Ribble Valley result (which turned a Tory majority of 19,000 into a Liberal majority of 5,000) and the current opinion polls (which on Sunday gave Tories an eight point lead over Labour, a 36-point lead over the Liberals) may be that news of Thatcher's removal has not yet sunk in properly among those slow- witted northerners.

But the accepted explanation is that Tory voters were protesting against the poll tax. That is what they beefed about most when canvassed. And the general feeling is that Major had better practise a bit of followership, in Thatcher's memor- able phrase, and abolish the poll tax pretty sharpish, or he will find himself queueing up behind his former leader to sit on Ted Heath's other knee below the gangway in the Opposition benches.

I suppose this may be right, but it occurs to me that there was no poll tax at issue in the by-election of 26 November 1981 at nearby Crosby, Merseyside, when, once again, a Conservative majority of 19,272 was turned into a Social Democrat-Liberal Alliance majority of 5,289. The most in- teresting thing about that curious episode is that 18 months later, in the general election of June 1983, Crosby was safely returned to the Conservative fold, where it has remained ever since. Nor, of course, did the 1981 result presage Conservative defeat in the general election of .1983.

There are many possible explanations for the Crosby result of 1981, including the charm, beauty and wit of the SD-Lib All candidate, Mrs Shirley Vivien Teresa Brit- tain Williams; the fact that she was pre- pared to go from Catholic church to Catholic church in her constituency, gob- bling Communion wafers like an ant-eater in order to demonstrate her piety, although Canon Law expressly forbade more than one Communion a day; the fact that the pinko Archbishop of Liverpool, Mgr Wor- lock, refused to denounce this public sac- rilege, blasphemy, scandal and mortal sin, despite my promptings . . .

But none of it mattered in the long run. Within 18 months, as I say, Williams had been sent packing and the Conservatives were returned nationally with a thumping great majority. All of which leads me to wonder whether it is really necessary for Mr Major to do away with the poll tax. All the commentators say it is necessary with one voice, but it is a sad truth that every Conservative government has to live with a corps of political commentators who are foolish, sheep-like and scared.

As someone who is considerably better off under poll tax than under rates — and vastly better off than under the Liberal's 51/2 per cent local income tax (would it double to 11 per cent for owners of two homes?) — I can well afford to take the objective view and state categorically that poll tax is very fair. What could be fairer than that everyone should pay the same? But it is not its fairness which is likely to recommend it to the nation. Inevitably, it will always be unpopular among those who have never paid rates before. The way to sell it is to stress, repeatedly and at enormous length, the horrors of any alternative system contemplated — the uncertainties of revaluation, the injustice of assessment by size, and the monstrosity of a 51/2p surcharge on income tax when the Tories have been working for 12 years to reduce the standard rate by that amount.

I was originally opposed to the poll tax because I judged the Tories could never get away with it. Whatever small saving I made on the rates would be wiped out many times over by the return of a socialist government. Under Thatcher, they could not possibly get away with it. Under Major, I think they just might, if they sell it correctly. Labour has nothing to offer, and few ordinary Conservative voters — out- side the Worsthorne feudal freaks and the Midlands race enthusiasts — will be any- thing but appalled by the thought of 51/2p on the standard rate of income tax.

Much will depend on what sort of Chancellor Norman Lamont proves to be. We must wait until Tuesday. I was mildly appalled by an Observer story posing as a Budget leak that he proposes to concen- trate on 'green' motoring in his first Budget. The global-warming scare has already been exposed as a total lie by those few scientists who do not have a vested interest in the £140 billion research and rectification programme intimated by Thatcher.

But perhaps Lamont, like the voters of Ribble Valley, has not taken on board the fact that Thatcher, with her strange obses- sions and thuggish methods of im- plementing them, has actually been drop- ped overboard. His problem is that he is surrounded by these buffoon-like political commentators, who have got it into their heads that the Tories cannot survive poll tax. I must take some of the blame, because I helped to put it there. The problem, once. you have implanted an idea into the political process, is to get it out.

I would like to leave one last thought. Right-wing commentators are appalled by the electoral consequences of any measure which can be interpreted as a blow against the poorer half of the population. Influ- enced by them, many traditional Conserva- tive voters are similarly frightened. It is my observation that pilgering has the opposite effect to that intended. If middle-of-the- road voters can be persuaded that general poverty is so acute in large parts of the country that unmarried mothers in New- castle are being forced to eat cockroaches to survive (which of course they are not), the general reaction among those not eating cockroaches is to assume they be- long to the richer half, and vote according- ly. That, at any rate, is my observation.