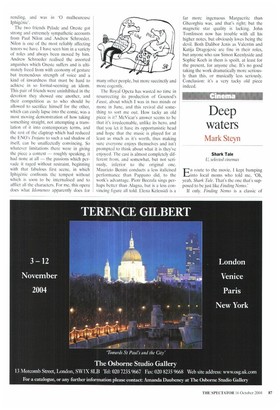 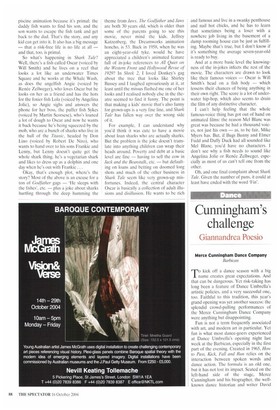 E n route to the movie, I kept bumping I into local moms who told me, 'Oh, yeah, Shark Tale. That's the one that's supposed to be just like Finding Nemo.'

If only. Finding Nemo is a classic of piscine animation because it's primal: the daddy fish wants to find his son, and the son wants to escape the fish tank and get back to the dad. That's the story, and any kid can get into it. It also has a big message — that a risk-free life is no life at all — and that, too, is primal

So what's happening in Shark Tale? Well, there's a fish called Oscar (voiced by Will Smith) and he lives on a reef that looks a lot like an underwater Times Square and he works at the Whale Wash, as does the angelfish Angie (voiced by Renee Zellweger), who loves Oscar but he looks on her as a friend and has the hots for the foxier fish Lola (voiced by Angelina Julie), so Angie sighs and answers the phone for her boss, the puffer fish Sykes (voiced by Martin Scorsese), who's loaned a lot of dough to Oscar and now he wants it back because he's being squeezed by the mob, who are a bunch of sharks who live in the hull of the Titanic, headed by Don Lino (voiced by Robert De Niro), who wants to hand over to his sons Frankie and Lenny, but Lenny doesn't quite get the whole shark thing, he's a vegetarian shark and likes to dress up as a dolphin and one day when he's out with Frankie Okay, that's enough plot, where's the story? Most of the above is an excuse for a ton of Godfather gags — He sleeps with the fishes', etc. — plus a joke about sharks hurtling through the deep humming the theme from Jaws. The Godfather and Jaws are both 30 years old, which is older than sonic of the parents going to see this movie, never mind the kids. Jeffrey Katzenberg, the Dreamworks animation honcho, is 53. Back in 1958, when he was an eight-year-old tyke, would he have appreciated a children's animated feature full of in-joke references to All Quiet on the Western Front and Hollywood Revue of 1929? In Shrek 2, I loved Donkey's gag about the tree that looks like Shirley Bassey and I laughed uproariously at it, at least until the missus flashed me one of her looks and I realised nobody else in the theatre seemed to find it funny. The point is that making a kids' movie that's also funny for grown-ups is a very fine line, and Shark Tale has fallen way over the wrong side of it.

For example, I can understand why you'd think it was cute to have a movie about loan sharks who are actually sharks. But the problem is the joke doesn't translate into anything children can wrap their heads around. Poverty and debt at a basic level arc fine — having to sell the cow in Jack and the Beanstalk, etc. — but defaulting on loans and betting on doomed long shots and much of the other business in Shark Tale seem like very grown-up misfortunes. Indeed, the central character Oscar is basically a collection of adult illusions and disillusion. He wants to be rich

and famous and live in a swanky penthouse and nail hot chicks, and he has to learn that sometimes being a loser with a nowhere job living in the basement of a dump rooming house can be just as fulfilling. Maybe that's true, but I don't know if it's something the average seven-year-old is ready to buy.

And at a more basic level the knowingness of the in-jokes infects the rest of the movie. The characters are drawn to look like their famous voices — Oscar is Will Smith's head on a fish body — which lessens their chances of being anything in their own right. The score is a lot of underwater hip-hop, which also seems to drain the film of any distinctive character.

I can't help feeling that the whole famous-voice thing has got out of hand on animated films: the reason Mel Blanc was great was because he had a thousand voices, not just his own — as, to be fair, Mike Myers has. But, if Bugs Bunny and Elmer Fudd and Daffy Duck had all sounded like Mel Blanc, you'd have no characters. I don't see why a fish needs to sound like Angelina Jae or Renee Zellweger, especially as most of us can't tell one from the other.

Oh, and one final complaint about Shark Tale. Given the number of puns, it could at least have ended with the word Tin'.