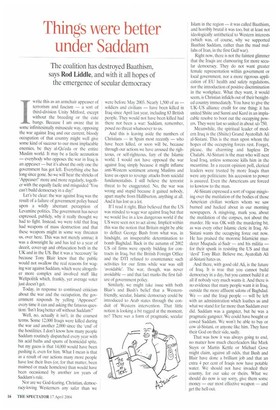 Things were better under Saddam

The coalition has destroyed Baathism, says Rod Liddle, and with it all hopes of the emergence of secular democracy Iwrite this as an armchair appeaser of terrorism and fascism — a sort of third-division Unity Mitford, except without the breeding or the cute bangs. Because I am aware that in some infinitesimally minuscule way, opposing the war against Iraq and our current, bloody occupation of that country might well give some kind of succour to our most implacable enemies, be they al-Qa'eda or the entire Muslim world. It may be a facile accusation — everybody who opposes the war in Iraq is an appeaser — but it's about the only one the government has got left. Everything else has long since gone. So we will hear the shrieks of 'Appeaser!' more and more regularly, together with the equally facile and misguided 'You can't build democracy in a day!'

Let's be clear: the war against Iraq was the result of a failure of government policy based upon a wildly aberrant perception of Levantine politics. The government has never expressed, publicly, why it really thought we had to fight. Instead, we were told that Iraq had weapons of mass destruction and that these weapons might in some way threaten us, over here. This was not merely untrue; it was a downright lie and has led to a year of deceit, cover-up and obfuscation both in the UK and in the US. But it was a `necessary' lie because Tony Blair knew that the public would not swallow the real reasons for waging war against Saddam, which were altogether more complex and involved stuff like Weltpolitik which, frankly, yer average voter just doesn't get.

Today, in response to continued criticism about the war and the occupation, the government responds by yelling 'Appeaser!' every time it can and asking the fatuous question: 'Isn't Iraq better off without Saddam?'

Well, no, actually it isn't, in the coarsest terms. Some 12,000 Iraqis were killed during the war and another 2,000 since the 'end' of the hostilities. I don't know how many people Saddam routinely dispatched every year with his acid baths and spurts of homicidal spite, but my guess is that 14,000 would have been pushing it, even for him. What I mean is that as a result of our actions many more people have lost their lives (or, for that matter, been maimed or made homeless) than would have been occasioned by another ten years of Saddam's rule.

Nor are we God-fearing, Christian, democracy-loving Westerners any safer than we were before May 2003. Nearly 1,500 of us — soldiers and civilians — have been killed in Iraq since April last year, including 83 British people. They would not have been killed had there not been a war: Saddam, remember, posed no threat whatsoever to us.

And this is leaving aside the numbers of Christians — in Spain most recently — who have been killed, or soon will be, because through our actions we have aroused the righteous, or self-righteous, fury of the Islamic world. I would not have opposed the war against Iraq simply because it might inflame anti-Western sentiment among Muslims and leave us open to revenge attacks from suicidal fundamentalists. I still believe the terrorist threat to be exaggerated. No, the war was wrong and stupid because it gained nobody, apart maybe from Halliburton, anything at all. And it has lost us a lot.

If I read it right, Blair believed that the US was minded to wage war against Iraq but that we would live in a less dangerous world if the US were seen not to act alone. Implicit within this was the notion that Britain might be able to deflect George Bush from what was, in hindsight, an insuperable determination to bomb Baghdad. Back in the autumn of 2002 US oil firms were openly bidding for contracts in Iraq, but the British Foreign Office and the DTI refused to countenance such activities for our firms while war was still 'avoidable'. The war, though, was never avoidable — and that fact marks the first failure of government policy.

Similarly, we might take issue with both Blair's and Bush's belief that a Westernfriendly. secular, Islamic democracy could be introduced to Arab states through the conduit of Western intervention. That little notion is looking a bit ragged at the moment, no? There was a form of pragmatic, secular Islam in the region — it was called Baathism, and horribly brutal it was too, but at least not ideologically antithetical to Western interests (which was, of course, why we supported Baathist Saddam, rather than the mad mullahs of Iran, in the first Gulf war).

Right now, there is not the faintest glimmer that the Iraqis are clamouring for more secular democracy. They do not want greater female representation within government or local government, nor a more rigorous application of EU health and safety regulations, nor the introduction of positive discrimination in the workplace. What they want, it would seem, is Christian infidels out of their benighted country immediately. You have to give the UK–US alliance credit for one thing: it has united Shiite and Sunni and Kurd in an implacable resolve to boot out the occupying powers. They were last so united in about AD 750.

Meanwhile, the spiritual leader of modern Iraq is the (Shiite) Grand Ayatollah Ali al-Sistani. This is the man upon whom the hopes of the occupying forces rest. Forget, please, the charming and hapless Dr Chalabi. Al-Sistani is the man who will next lead Iraq, unless someone kills him in the meantime. In a recent opinion poll, clerical leaders were trusted by more Iraqis than were any politicians: his accession to power is assured. Even the Americans are forced to kowtow to the man.

Al-Sistani expressed a sort of vague misgiving over the mutilation of the bodies of those American civilian workers whom we saw burned and hacked about in our morning newspapers. A misgiving, mark you, about the mutilation of the corpses, not about the murder. He was OK with the murdering bit, as was every other Islamic cleric in Iraq. AlSistani wants the occupying force out now. He has praised the moronic Islamicist murderer Muqtada al-Sadr — and his militia — for their spunk in resisting the US and that `devil' Tony Blair. Believe me, Ayatollah Ali al-Sistani hates us.

And there, with good old Ali, is the future of Iraq. It is true that you cannot build democracy in a day, but you cannot build it at all if nobody very much wants it. And there is no evidence that many people want it in Iraq, outside the more affluent salons of Baghdad. We — and the Iraqi people — will be left with an administration which loathes us and what we stand for far more than Saddam ever did. Saddam was a gangster, but he was a pragmatic gangster. We could have bought or cowed Saddam. We won't be able to buy or cow al-Sistani, or anyone like him. They have their God on their side, sadly.

That was how it was always going to end, no matter how much cheerleaders like Mark Steyn or Martin Kettle or Michael Gove might claim, against all odds, that Bush and Blair have done a brilliant job and that an extra 4 per cent of Iraqis now have potable water. We should not have invaded their country, for our sake or theirs. What we should do now is say sorry, give them some money — our most effective weapon — and get the hell out.