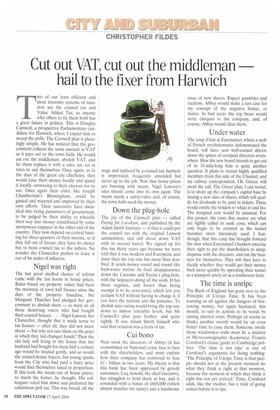 Cut out VAT, cut out the middleman hail to the fixer from Harwich

Two of our least efficient and most tiresome systems of taxation are the council tax and Value Added Tax, so anyone who offers to fix them both has a great future in politics. This is Douglas Carswell, a prospective Parliamentary candidate for Harwich, where I expect him to sweep the polls. The Carswell plan is pleasingly simple. He has noticed that the government collects the same amount in VAT as it pays out to the town halls. He would cut out the middleman, abolish VAT, and let them replace it with a sales tax, set at rates to suit themselves. Once again, as in the days of the great city chieftains, they would raise their money locally and spend it locally, answering to their electors for its use. Once again their cities, like Joseph Chamberlain's Birmingham, could be gassed and watered and improved by their own efforts. Their successors have dwindled into being pensioners of government, to be judged by their ability to wheedle their way into money contributed by some anonymous taxpayer at the other end of the country. They now depend on central funding for three-quarters of their income, so if they fall out of favour, they have no choice but to hoist council tax to the rafters. No wonder the Chancellor prefers to leave it out of his index of inflation.

The last great muffed chance of reform came with the last boom in house prices. Rates based on property values had been the mainstay of town hall finance since the days of the property franchise, but Margaret Thatcher had pledged her government to abolish them — so hard on all those deserving voters who had bought their council houses.. . . Nigel Lawson, her Chancellor, thought that it made sense to tax houses — after all, they did not move about — but why not rate them on the price at which they last changed hands? Then the old lady still living in the house that her husband had bought for them half a century ago would be treated gently, and so would the council-house buyers, but young sparks from the City who had paid a fancy price would find themselves taxed in proportion. If this took the steam out of house prices, so much the better, he thought. His colleagues voted him down and preferred the calamitous poll tax. This was booed off the stage and replaced by a council tax, hurriedly improvised, frequently amended but never up to the job. Now that house prices are bursting with steam, Nigel Lawson's idea should come into its own again. The steam needs a safety-valve and, of course, the town halls need the money.

The joy of the Carswell plan — called Paying for Localism, and published by the Adam Smith Institute — is that it could pot the council tax with the original Lawson ammunition, and still shoot down VAT with its second barrel. We signed up for this tax thirty years ago because we were told that it was modern and European, and since then the top rate has more than doubled. It sends money round and round like bath-water before its final disappearance down the Customs and Excise's plug-hole, with the taxpayers doing all the work. It has three regimes, and better than being exempt is to be zero-rated, which lets you reclaim VAT without having to charge it, if you have the systems and the patience. To abolish zero rating would bring the top rate down to almost tolerable levels, but Mr Carswell's plan goes further, and quite rightly. It was Adam Smith himself who said that vexation was a form of tax.

Next week the directors of Abbey (it has economised on National) come face to face with the shareholders, and must explain how their company has contrived to lose £11'2 billion in two years. My theory is that this bank has been oppressed by greedy customers. Luq Arnold, the chief executive, has struggled to hold them at bay, and is rewarded with a bonus of £608,000 (which almost matches his salary) and a handsome

issue of new shares. Expect grumbles and ructions. Abbey would make a test case for my concept of the negative bonus, or malus. In bad years the top brass would write cheques to the company, and, of course, Abbey would clear them.

The coup d'etat at Eurotunnel, where a mob of French revolutionaries defenestrated the board, will have sent well-earned shivers down the spines of overpaid directors everywhere. How the new board intends to get out of its 31-mile-long hole is quite another question. It plans to recruit highly qualified members from this side of the Channel, and my railway correspondent, I.K. Gricer, will await the call. The Gricer plan, I can reveal, is to shore up the company's capital base by issuing a new class of shares, which will qualify for dividends to be paid in tickets. These would entitle the holders to whizz to and fro. The marginal cost would be minimal. For this project, the costs that matter are what are rightly called its sunk costs, which can only begin to be covered as the tunnel becomes more intensively used. I fear, though, that this coup has brought forward the date when Eurotunnel's bankers exercise their right to put the shareholders to sleep, dispense with the directors, and run the business for themselves. They will then have to decide whether they would get their money back more quickly by operating their tunnel as a transport artery or as a mushroom farm.

The time is unripe

The Bank of England has gone over to the Principle of Unripe Time. It has been warning us all against the dangers of borrowing money, but again hesitated, this month, to suit its actions to its words by raising interest rates. Perhaps (it seems to think) another month would be an even better time to raise them. Someone inside those windowless walls must be a student of Microcosmographia Academica, Francis Cornford's classic guide to Cambridge politics. 'The time is not ripe' is one of Cornford's arguments for doing nothing: The Principle of Unripe Time is that people should not at the present moment do what they think is right at that moment, because the moment at which they think it right has not yet arrived.' Time, Cornford adds, like the medlar, has a trick of going rotten before it is ripe.