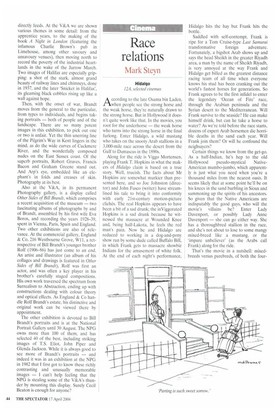 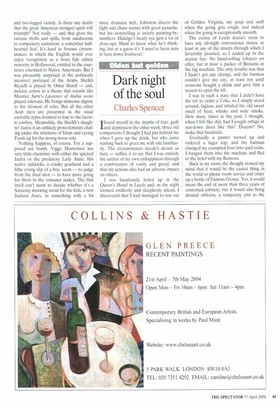 124, selected cinemas A ccording to the late Osama bin Laden, ri.when people see the strong horse and the weak horse, they're naturally drawn to the strong horse. But in Hollywood it doesn't quite work like that. In the movies, you root for the underhorse — the weak horse who turns into the strong horse in the final furlong. Enter Hidalgo, a wild mustang who takes on the snooty Arab stallions in a 3,000-mile race across the desert from the Gulf to Damascus in the 1890s.

Along for the ride is Viggo Mortensen, playing Frank T. Hopkins in what the makers of Hidalgo claim is based on a true story. Well, trueish. The facts about Mr Hopkins are somewhat murkier than presented here, and so Joe Johnston (director) and John Fusco (writer) have streamlined his tale to bring it into conformity with early 21st-century motion-picture clichés. The real Hopkins appears to have been a bit of a sad drunk; the inViggorated Hopkins is a sad drunk because he witnessed the massacre at Wounded Knee and, being half-Lakota, he feels the red man's pain. Now he and Hidalgo are reduced to working in a dog-and-pony show run by some dude called Buffalo Bill, in which Frank gets to massacre showbiz Indians for the amusement of white folk. At the end of each night's performance,

Hidalgo hits the hay but Frank hits the bottle.

Saddled with self-contempt, Frank is ripe for a Tom Cruise-type Last Samurai

transformative foreign adventure. Fortunately, a bigshot Arab shows up and says the head Sheikh in the greater Riyadh area, a man by the name of Sheikh Riyadh, is very annoyed at the way Frank and Hidalgo get billed as the greatest distance racing team of all time when everyone knows his stud has been cranking out the world's fastest horses for generations. So Frank agrees to be the first infidel to enter the legendary 'Ocean of Fire' race, through the Arabian peninsula and the Syrian desert to the Mediterranean. Will Frank survive to the seaside? He can make himself drink, but can he take a horse to water? As we're told before the race starts, dozens of expert Arab horsemen die horrible deaths in the sand each year. Will Frank join them? Or will he confound the neighsayers?

Certain things we know from the get-go. As a half-Indian, he's hep to the old Hollywood pseudo-mystical NativeAmerican mumbo-jumbo, which apparently is just what you need when you're a thousand miles from the nearest oasis. It seems likely that at some point he'll be on his knees in the sand burbling in Sioux and summoning up the spirits of his ancestors. So given that the Native Americans are indisputably the good guys, who will the movie's villains be? Enter Lady Davenport, or possibly Lady Anne Davenport — she can go either way. She has a thoroughbred stallion in the race, and she's not about to lose to some mangy mixed-breed like a mustang, or the 'impure unbeliever' (as the Arabs call Frank) along for the ride.

That's the movie in a nutshell: mixedbreeds versus purebreds, of both the four

and two-legged variety. Is there any doubt that the great American mongrel spirit will triumph? Not really — and that gives the various thrills and spills, from sandstorms to compulsory castration, a somewhat halfhearted feel. It's hard to foresee circumstances in which the English would ever enjoy recognition as a bona fide ethnic minority in Hollywood, entitled to the courtesies extended to Native Americans. But I was pleasantly surprised at the politically incorrect portrayal of the Arabs. Sheikh Riyadh is played by Omar Sharif — and, indeed, enters to a theme that sounds like Maurice Jane's Lawrence of Arabia score played sideways. He brings immense dignity to the thinnest of roles. But all the other Arab men are presented as the usual excitable types doomed to lose to the laconic cowboy. Meanwhile, the Sheikh's daughter Jazira is an unlikely proto-feminist chafing under the strictures of Islam and eyeing Frank up for the strong-horse role.

Nothing happens, of course. For a supposed sex bomb, Viggo Mortensen has very little chemistry with either the spirited Jazira or the predatory Lady Anne. His native sidekicks, a cranky goatherd and a lithe young slip of a boy, seem — to judge from the final shot — to have more going for them in the romance stakes. The film itself can't seem to decide whether it's a Saturday morning serial for the kids, a new Indiana Jones, or something with a bit more dramatic heft. Johnston directs the fight and chase scenes with great panache, hut his storytelling is strictly painting-bynumbers. Hidalgo's beady eye gets a lot of close-ups. Hard to know what he's thinking, but at a guess it's must've been nuts to turn down Seabiscui