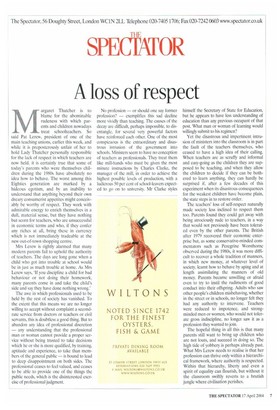 A loss of respect

Margaret Thatcher is to blame for the abominable rudeness with which parents and children nowadays treat schoolteachers. So said Pat Lerew, president of one of the main teaching unions, earlier this week, and while it is preposterously unfair of her to hold Lady Thatcher personally responsible for the lack of respect in which teachers are now held, it is certainly true that some of today's parents who were themselves children during the 1980s have absolutely no idea how to behave. The worst among this Eighties generation are marked by a hideous egotism, and by an inability to understand that anything beyond their own dreary consumerist appetites might conceivably be worthy of respect. They work with admirable energy to enrich themselves in a dull, material sense, but they have nothing but scorn for teachers, who are unsuccessful in economic terms and who, if they confer any riches at all, bring these in currency which is not immediately tradeable at the new out-of-town shopping centre.

Mrs Lerew is rightly alarmed that many modern parents fail to uphold the authority of teachers. The days are long gone when a child who got into trouble at school would be in just as much trouble at home. As Mrs Lerew says, 'If you discipline a child for bad behaviour or not doing their homework, many parents come in and take the child's side and say they have done nothing wrong.'

The awe in which professionals used to be held by the rest of society has vanished. To the extent that this means we are no longer willing to accept without complaint a secondrate service from doctors or teachers or civil servants, this is doubtless a good thing. But to abandon any idea of professional discretion — any understanding that the professional man or woman cannot provide a proper service without being trusted to take decisions which he or she is more qualified, by training, aptitude and experience, to take than members of the general public — is bound to lead to deep disappointment on both sides. The professional ceases to feel valued, and ceases to be able to provide one of the things the public needs, which is the disinterested exercise of professional judgment. No profession — or should one say former profession? — exemplifies this sad decline more vividly than teaching. The causes of the decay are difficult, perhaps impossible, to disentangle, for several very powerful factors have reinforced each other. One of the most conspicuous is the extraordinary and disastrous intrusion of the government into schools. Ministers seem to have no conception of teachers as professionals. They treat them like mill-hands who must be given the most minute instructions by Charles Clarke, the manager of the mill, in order to achieve the highest possible levels of production, with a ludicrous 50 per cent of school-leavers expected to go on to university. Mr Clarke styles himself the Secretary of State for Education, but he appears to have less understanding of education than any previous occupant of that post. What man or woman of learning would willingly submit to his regimen?

Yet the disastrous and impertinent intrusion of ministers into the classroom is in part the fault of the teachers themselves, who ceased to have a high idea of their calling. When teachers are as scruffy and informal and easy-going as the children they are supposed to be teaching, and when they allow the children to decide if they can be bothered to learn anything, they can hardly be surprised if after a few decades of this experiment when its disastrous consequences for the weakest children have become plain, the state steps in to restore order.

The teachers' loss of self-respect naturally made society less inclined to respect them too. Parents found they could get away with being atrociously rude to teachers, in a way that would not previously have been tolerated even by the other parents. The British after 1979 recovered their economic enterprise but, as some conservative-minded commentators such as Peregrine Worsthorne observed during the 1980s, it was more difficult to recover a whole tradition of manners, in which new money, at whatever level of society, learnt how to behave by aping and at length assimilating the manners of old money. Parents became unwilling or afraid even to try to instil the rudiments of good conduct into their offspring. Adults who saw other people's children misbehaving, whether in the street or in schools, no longer felt they had any authority to intervene. Teachers were reduced to impotence, and strongminded men or women, who would not tolerate gross indiscipline, no longer saw it as a profession they wanted to join.

The hopeful thing in all this is that many parents still want to bring up children who are not louts, and succeed in doing so. The high tide of yobbery is perhaps already past. What Mrs Lerew needs to realise is that her profession can thrive only within a hierarchical framework, where authority is respected. Within that hierarchy, liberty and even a spirit of equality can flourish, but without it the classroom swiftly reverts to a brutish jungle where civilisation perishes.