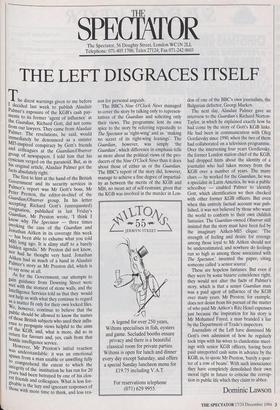 SPECTAT THE OR The Spectator, 56 Doughty Street, London WC1N 2LL

THE LEFT DISGRACES ITSELF

The direst warnings given to me before I decided last week to publish Alasdair Palmer's exposure of the KGB's cash pay- ments to its former 'agent of influence' at the Guardian, Richard Gott, did not come from our lawyers. They came from Alasdair Palmer, The revelations, he said, would immediately be denounced as a sinister MI5-inspired conspiracy by Gott's friends and colleagues at the GuardianlObserver group of newspapers. I told him that his eYnicism verged on the paranoid. But, as in his original article, Alasdair Palmer got the facts absolutely right. The first to hint at the hand of the British Government and its security services in Palmer's report was Mr Gott's boss, Mr Peter Preston, the editor-in-chief of the Guardian/Observer group. In his letter accepting Richard Gott's (unrequested) resignation, published in last Friday's Guardian, Mr Preston wrote, 'I think I know why The Spectator — three times invoking the case of the Guardian and Jonathan Aitken in its coverage this week — has been able to exhume what you told MI6 long ago. It is slimy stuff to a barely hidden agenda.' Mr Preston did not know, fOr had he thought very hard. Jonathan Aitken had as much of a hand in Alasdair Palmer's story as Mr Preston did, which is to say none at all. As for the Government, our attempts to gain guidance from Downing Street were met with the stoniest of stone walls, and the Intelligence Services told us that they would not help us with what they continue to regard as a matter fit only for their own locked files. We, however, continue to believe that the Public should be allowed to know the names of those British subjects who used their influ- ence to propagate views helpful to the aims of the KGB, and, what is more, did so in r. eturn for favours and, yes, cash from that hostile intelligence service. However, Mr Preston's initial reaction was understandable: it was an emotional spasm from a man unable or unwilling fully to comprehend the extent to which the Integrity of the institution he has run for 20 years had been betrayed by one of his clos- est friends and colleagues. What is less for- givable is the lazy and ignorant responses of those with more time to think, and less rea-

The BBC's Nine O'Clock News managed to cover the story by talking only to represen- tatives of the Guardian and soliciting only their views. The programme lent its own spice to the story by referring repeatedly to The Spectator as 'right-wing' and as 'making no secret of its right-wing leanings'. The Guardian, however, was simply 'the Guardian', which difference in emphasis tells us more about the political views of the pro- ducers of the Nine O'Clock News than it does about those of either us or the Guardian. The BBC's report of the story did, however, manage to achieve a fine degree of impartial- ity as between the merits of the KGB and MI6, no mean act of self-restraint, given that the KGB was involved in the murder in Lon-

don of one of the BBC's own journalists, the Bulgarian defector, Georgi Markov.

The next day, Alasdair Palmer gave an interview to the Guardian's Richard Norton- Taylor, in which he explained exactly how he had come by the story of Gott's KGB links. He had been in communication with Oleg Gordievsky since 1990, when the two of them had collaborated on a television programme. Over the intervening four years Gordievsky, the former London station chief of the KGB, had dropped hints about the identity of a journalist who had taken money from the KGB over a number of years. The many clues — he worked for the Guardian, he was a specialist in Latin America, he was a public schoolboy — enabled Palmer to identify Gott, which identification we then checked with other former KGB officers. But even when this entirely factual account was pub- lished, it was not believed by those who want the world to conform to their own childish fantasies. The Guardian-owned Observer still insisted that the story must have been fed by the imaginary Aitken-MI5 clique: The strength of feeling and desire for revenge among those loyal to Mr Aitken should not be underestimated, and nowhere do feelings run so high as among those associated with The Spectator,' invented the paper, citing someone called 'a senior source'.

These are hopeless fantasies. But even if they were by some bizarre coincidence right, they would not alter the facts of Palmer's story, which is that a senior Guardian man was a paid agent of influence of the KGB over many years. Mr Preston, for example, does not desist from his pursuit of the matter of who paid Mr Aitken's Ritz Hotel expenses just because the inspiration for his story is Mr Mohamed Fayed, a man branded a liar by the Department of Trade's inspectors.

Journalists of the Left have dismissed Mr Gott's own admission of how he regularly took trips with his wives to clandestine meet- ings with senior KGB officers, having been paid unreported cash sums in advance by the KGB, as, to quote Mr Preston, 'barely a quar- ter of a row of beans'. With such insouciance they have completely demolished their own moral right in future to criticise the corrup- tion in public life which they claim to abhor.