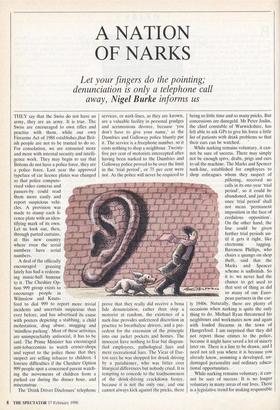 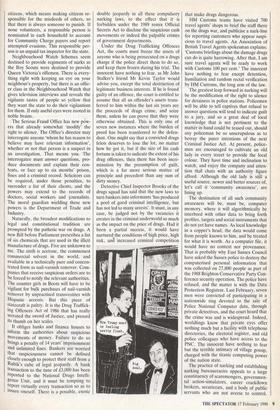 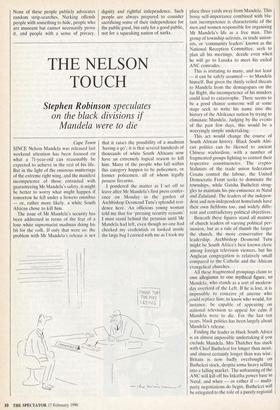 A NATION OF NARKS

Let your fingers do the pointing; denunciation is only a telephone call

A deal of the officially

encouraged grassing lately has had a redeem- ing music-hall humour to it. The Cheshire Op- tion 999 group exists to encourage people in Wilmslow and Knuts- ford to dial 999 to report more trivial incidents and uncertain suspicions than ever before, and has advertised its cause with posters depicting a stabbing, a child molestation, drug abuse, mugging and 'mindless parking'. Most of these activities are unimpeachably antisocial, it has to be said. The Prime Minister has encouraged anti-tobacconists to watch corner-shops and report to the police those that they suspect are selling tobacco to children. I foresee difficulties if the Cheshire Option 999 people spot a concerned parent watch- ing the movements of children from a parked car during the dinner hour, and misconstrue.

services, or nark-lines, as they are known, are a valuable facility in personal grudges and acrimonious divorce, because 'you don't have to give your name,' as the Dumfries and Galloway police bluntly put it. The service is a freephone number, so it costs nothing to shop a neighbour. Twenty- five per cent of motorists intercepted after having been narked to the Dumfries and Galloway police proved to be over the limit in the 'trial period', or 75 per cent were not. As the police will never be required to

prove that they really did receive a bona fide denunciation, rather than stop a motorist at random, the existence of a nark-line provides unfettered discretion in practice to breathalyse drivers, and a pre- cedent for the extension of the principle into our jacket pockets and homes. The innocent have nothing to fear but disgrun- tled employees, pathological liars and mere recreational liars. The Vicar of Dar- ton says he was shopped for drunk driving by a parishioner, who was bitter over liturgical differences but nobody cried. It is tempting to concede to the loathsomeness of the drink-driving crackdown frenzy, because it is not the only one, and one cannot always kick against the pricks, there being so little time and so many pricks. But concessions are danegeld. Mr Peter Joslin, the chief constable of Warwickshire, has felt able to ask GPs to give his force a little list of patients with drink problems so that their cars can be watched.

electronic tagging. Baroness Phillips, who chairs a quango on shop theft, said that the Marks and Spencer scheme is unBritish. So it is: we never had the chance to get used to that sort of thing as did so many of our Euro- pean partners in the ear- ly 1940s. Naturally, there are plenty of occasions when narking is quite the only thing to do. Michael Ryan threatened his neighbours and workmates now and again with loaded firearms in the town of Hungerford. I am surprised that they did not report those crimes to the police, because it might have saved a lot of misery later on. There is a line to be drawn, and I need not tell you where it is because you already know, assuming a developed, un- damaged personality and ordinary educa- tional opportunities.

While narking remains voluntary, it can- not be sure of success. It is no longer voluntary in many areas of our lives. There is a legislative trend for making responsible citizens, which means making citizens re- sponsible for the misdeeds of others, so that there is always someone to punish. If none volunteers, a responsible person is nominated in each household to account for Community Charge payers and report attempted evasions. This responsible per- son is an unpaid tax inspector for the state.

Neighbourhood Watch Schemes seem destined to provide regiments of narks as the Boy Scouts were destined to provide Queen Victoria's riflemen. There is every- thing right with keeping an eye on your neighbour's property, but there is an offic- er class in the Neighbourhood Watch that gives television interviews and reveals the vigilante tastes of people so yellow that they want the state to do their vigilantism for them. If only useful eyes were rooted in noble brains.

The Serious Fraud Office has new pow- ers that already somewhat 'modify' the right to silence. The Office's director may interrogate anyone 'whom he has reason to believe may have relevant information', whether or not that person is a suspect in

an investigation. That means you. The interrogatee must answer questions, pro- duce documents and explain their con-

tents, or face up to six months' prison, fines and a criminal record. Solicitors can be required, under those penalties, to surrender a list of their clients, and the powers may extend to the records of doctors, social workers and journalists. The moral guardian wielding these new powers is the Department of Trade and Industry.

Naturally, the broadest modifications to legal and constitutional tradition are prompted by the pathetic war on drugs. A new Bill before Parliament prescribes a list of six chemicals that are used in the illicit manufacture of drugs. Five are unknown to me. The sixth is acetone, the commonest commercial solvent in the world, and available in a technically pure and concen- trated form as nail-varnish remover. Com- panies that receive suspicious orders are to be forced to notify the relevant authorities. The counter girls in Boots will have to be Vigilant for bulk purchases of nail-varnish remover by unpractised transvestites with Hispanic accents. But this piece of statecraft is paltry. It is the Drug Traffick- ing Offences Act of 1986 that has really serrated the sword of Justice, and pressed its thumb on her scales.

It obliges banks and finance houses to inform the authorities about suspicious movements of money. Failure to do so brings a penalty of 14 years' imprisonment and unlimited fines. Bankers are worried that suspiciousness cannot be defined Closely enough to protect their staff from a Rubik's cube of legal jeopardy. A bank

transaction to the tune of £3,000 has been reported to the National Drugs Intelli-

gence Unit, and it must be tempting to report virtually every transaction so as to insure oneself. There is a possible, exotic double jeopardy in all these compulsory narking laws, to the effect that it is forbidden under the 1989 remix Official Secrets Act to disclose the suspicious cash movements or indeed the palpable crimes of government departments.

, Under the Drug Trafficking Offences Act, the courts must freeze the assets of anyone who is being prosecuted on a drugs charge if the police direct them to do so, and keep them frozen during his trial. The innocent have nothing to fear, as Mr John Stalker's friend Mr Kevin Taylor would advise you, except the total destruction of legitimate business interests. If he is found guilty of an offence, the court is entitled to assume that all an offender's assets trans- ferred to him within the last six years are the proceeds of drugs crime, and seize them, unless he can prove that they were otherwise obtained. This is only one of seven new instances where the burden of proof has been transferred to the defen- dant. One might say that a convicted drugs felon deserves to lose the lot, no matter how he got it, but if the size of his cash fortune is taken to indicate the extent of his drug offences, then there has been incri- mination by the presumption of guilt, which is a far more serious matter of principle and precedent than any sum of dirty money.

Detective Chief Inspector Brooks of the drugs squad has said that the new laws to turn bankers into informants 'has produced a pool of good criminal intelligence, but has not led to many arrests'. It must, in any case, be judged not by the vacancies it creates in the criminal underworld so much as the impact on the price of drugs. Had it been a partial success, it would have nurtured the conditions of high price, high risk, an increased criminal competition

HM Customs teams have visited 700 travel agents' shops to brief the staff there on the drugs war, and publicise a nark-line for reporting customers who appear suspi- cious to travel agents. An Association of British Travel Agents spokesman explains: 'Customs briefings about the damage drugs can do is quite harrowing. After that, I am sure travel agents will be ready to work with Customs 100 per cent.' The innocent have nothing to fear except detention, humiliation and random rectal verification by HM Customs, the long arm of the law.

The greatest leap forward in narking will be the modification of the right to silence for detainees in police stations. Policemen will be able to tell captives that refusal to answer questions will tend to indicate guilt to a jury, and so a great deal of local knowledge that is not pertinent to the matter in hand could be teased out, should any policeman be so unscrupulous as to betray the purer intentions of the next Criminal Justice Act. At present, police- men are encouraged to cultivate an old lady in every street to provide the local colour. They have time and inclination to watch, and enjoy the company and atten- tion that chats with an authority figure afford. Although the old lady is still a useful source, newer and better sources of, let's call it 'community awareness', are lining up.

The destination of all such community awareness will be, must be, computer memory, where it will algorithmically be interbred with other data to bring forth profiles, targets and social instruments that do not yet have names. As local knowledge in a copper's head, the data would come from people known to him, and be treated for what it is worth. As a computer file, it would have no context nor provenance. That is probably why East Sussex Council have asked the Sussex police to destroy the computerised personal information that was collected on 27,800 people as part of the 1988 Brighton Conservative Party Con- ference security operation. The police have refused, and the matter is with the Data Protection Registrar. Last February, seven men were convicted of participating in a nationwide ring devoted to the sale of Police National Computer data, through private detectives, and the court heard that the crime was and is widespread. Indeed, worldlings know that private eyes offer nothing much but a facility with telephone directories, the electoral register, and old police colleagues who have access to the PNC. The innocent have nothing to fear but the terrible intimacy of village gossip, charged with the titanic computing power of the nation state.

The practice of narking and establishing narking bureaucracies appeals to a large constituency of scaremongers, governmen- tal action-simulators, career crackdown brokers, securicrats, and a body of public servants who are not averse to control. None of these people publicly advocates random strip-searches. Narking offends people with something to hide, people who are innocent but cannot necessarily prove it, and people with a sense of privacy, dignity and rightful independence. Such people are always prepared to consider sacrificing some of their independence for the public good, but only for a good public, not for a squeaking nation of narks.