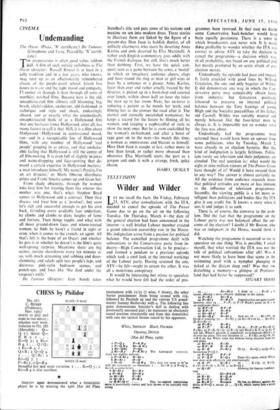 TuE preposterous is often good value, seldom dull. A film of such outsize awfulness as The Oscar (director: Russell Rouse) is at least in a jolly tradition and in a few years, who knows, may turn up as an affectionately remembered classic of the purple-patch school. Given two hours to waste and the right mood and company, [I sooner sit through it than through all sorts of worthier, not-bad films. Because here is the old, unsophisticated film silliness still blooming; big, brash, cliché-ridden, exuberant, old-fashioned in technique and style and shock, endearingly absurd, and so exactly what the cinematically unsophisticated think of as a Hollywood film that one hesitates (since Hollywood, after all, has many facets) to call it that. Still, it is a film about Hollywood—Hollywood in confessional mood, too—and in a recognisable line of Hollywood films, with any number of Hollywood' real people' popping in as extras, and that unshake- able feeling that Hollywood is still the centre of all film-making. It is even full of slightly in-jokes and name-dropping and face-spotting that de- mand a certain expertise in Hollywood matters: a man introduces himself,'My name's Pereira,I'm an art director,' or Merle Oberon distributes prizes and Frank Sinatra comes up and kisses her.

From shady obscurity, through the women who love him for treating them like whores (his mother was one, that's why), Stephen Boyd comes to Hollywood and a contract. Then they discuss and treat him as a 'product'; but soon he's rich and successful enough- to get his own back. Grinding every available face underfoot, he climbs and climbs to dizzy heights of fame and fortune. Then things topple, and what with all those ground-down faces and whore-treated women, he finds he hasn't a friend in sight or even, when it comes to the crunch, an agent. All that's left is the hope of an Oscar; and whether he gets it or whether he doesn't is the film's quite well-sprung surprise. Meantime there are big scenes, outsize showdowns every ten minutes or so, with much screaming and sobbing and door- slamming, and salads spilt into people's laps, and decorous pink-satin bedroom scenes, and punch-ups, and lines like 'She died under the surgeon's knife.'

Stendhal's title and puts some of his notion's and maxims on sex into modern dress. Three stories to illustrate them are linked by the figure of a present-day Don Juan (a baldish dentist, of all unlikely charmers), who starts by deserting Anna Karina and ends deserted by Elsa Martinelli. A rather arch English commentary goes oddly with the French dialogue, but still, that's much better than dubbing. First, we have the quick con- quest seen as a game between the sexes, a 'match' in which an imaginary audience cheers, claps and boos round the ring as man or girl wins or loses by a sentence or a glance. Anna Karina,• feyer than ever and rather cruelly treated by the director, is picked up in a bookshop and courted over lunch; within about half an hour she takes the man up to her room. Next, her ex-lover is seducing a patient as he mends her teeth, and filming her as she crosses the road after it. The eternal and eternally unsatisfied womaniser, he keeps a record for the future by filming all his women, and keeping a cupboardful of reels to show the next ones. But he is soon cuckolded by the woman's ex-husband, and after a burst of rage.goes on to the next—his match this time, a woman as omnivorous and blatant as himself. Here Dolt Juan is caught at last, rather more in love than loved, or rather more obsessed than obsessive. Elsa Martinelli starts the part as a gorgon and ends it with a strange, fresh, spiky charm.