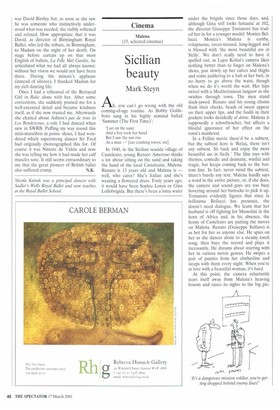 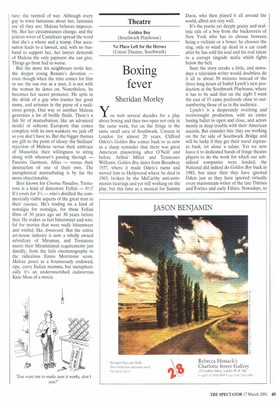 Ah, you can't go wrong with the old coming-of-age routine. As Bobby Goldsboro sang in his highly seminal ballad 'Summer (The First Time)': 'I sat on the sand

And a boy took her hand But I saw the sun rise As a man —' [cue crashing waves. etc]

In 1940, in the Sicilian seaside village of Castelcuto, young Renato Amoroso thinks a lot about sitting on the sand and taking the hand of the local Castelcutie, Malena. Renato is 13 years old and Malena is — well, who cares? She's Italian and she's wearing a flowered dress. Forty years ago, it would have been Sophia Loren or Gina Lollobrigida. But there's been a lorra water

under the brigida since those days, and, although Gina still looks fantastic at 102, the director Giuseppe Tornatore has traded her in for a younger model: Monica Bellucci. Monica's Malena is earthy, voluptuous, raven-tressed, long-legged and is blessed with 'the most beautiful ass in Sicily'. We don't really need to have it spelled out, as Lajos Koltai's camera likes nothing better than to linger on Malena's shoes, pan slowly up her calves and thighs and come juddering to a halt at her butt, in no hurry to go above the waist, though when we do it's worth the wait. Her hips swivel with a Mediterranean languor as she swishes through town. The men stand slack-jawed. Renato and his young chums flush their cheeks, beads of sweat appear on their upper lips, and the fusilli in their pockets looks decidedly al dente. Malena is supposedly a schoolteacher, but affects a blissful ignorance of her effect on the town's manhood.

In a Fellini movie there'd be a subtext, but the subtext here is 'Relax, there isn't any subtext. Sit back and enjoy the most beautiful ass in Sicily.' The film toys with themes, comedic and dramatic, wistful and tragic, but keeps coming back to the bottom line. In fact, never mind the subtext, there's barely any text. Malena hardly says a word in the entire picture, or, if she does, the camera and sound guys are too busy hovering around her buttocks to pick it up. Tornatore evidently figures that since la bellissima Bellucci has presence, she doesn't need dialogue. We learn that her husband is off fighting for Mussolini in the horn of Africa and, in his absence, the horny of Castelcuto are putting the moves on Malena. Renato (Guiseppe Sulfaro) is as hot for her as anyone else. He spies on her as she dances alone to a steamy torch song, then buys the record and plays it incessantly. He dreams about starring with her in various movie genres. He swipes a pair of panties from her clothesline and sleeps with them every night. When you're in love with a beautiful woman, it's hard.

At this point, the camera reluctantly tears itself away from Malena's heaving bosom and raises its sights to the big pic ture: the turmoil of war. Although every guy in town fantasises about her, fantasies are all they are: Malena behaves impeccably. But her circumstances change, and the jealous wives of Castelcuto spread the word that she's a whore and a tramp. One accusation leads to a lawsuit, and, with no husband to support her, her lawyer demands of Malena the only payment she can give. Things go from bad to worse.

Best known for Cinema Paradiso. Tornatore is a kind of dimestore Fellini — 8V2? It's yours for 31/4 — who's distilled the commercially viable aspects of the great man to their essence. He's trading on a kind of nostalgia for nostalgia, for those Fellini films of 30 years ago set 30 years before that. He makes us feel bittersweet and wistful for movies that were really bittersweet and wistful, like Amarcord. But the entire art-house industry is now a wholly owned subsidiary of Miramax, and Tornatore meets their Miraminimal requirements just dandily, from the lush cinematography to the ridiculous Ennio Morricone score. Malena poses as a bounteously endowed, ripe, curvy Italian mamma, but metaphorically it's an undernourished cadaverous Kate Moss of a movie.