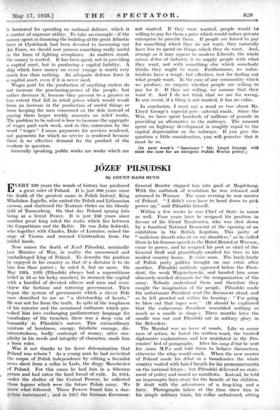 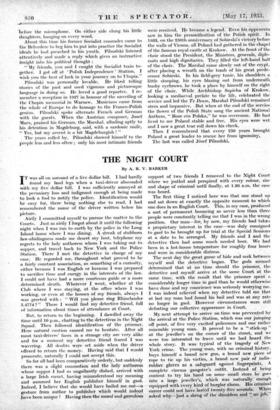 'LIVERY 250 years the womb of history has produced .1'.4 a great ruler of Poland. It is just 500 years since the death of the greatest name in Polish history:, King Wladislaw-Jagiello, who united the Polish and Lithuanian crowns, and shattered the Teutonic Order on the bloody field of Tannenberg. On that day Poland sprang into being as a Great Power. It is just '250 years since another great king ruled the realm which lies between the Carpathians and the Baltic. He was John Sobieski, who together with Charles, Duke of Lorraine,- raised the siege of Vienna and rescued Christendom from the infidel horde.

Now comes the death of Jozef Pilsudski, nominally just Minister of War, in reality the uncrowned and unchallenged king of Poland. To describe the position he enjoyed in his country as that of a dictator is to do him less than justice ; he ruled it, but no more. On May 13th, 1926 (Pilsudski always had a superstitious belief in 13 as his lucky number), he stormed the capital with a handful of devoted officers and men and over- threw the factious and tottering government. Then began the system of government which a clever Pole once described to me as " a dictatorship of hearts." He was not far froth the truth. In spite of the roughness of his exterior and the occasional outbursts which pro- voked him into exchanging parliamentary language for Vocabulary of the trenches, there was a deep vein of humanity in Pilsudski's nature. This extraordinary mixture of harshness, energy, fatalistic courage, dis- interestedness, lordly contempt of money, utter sim- plicity in his needs and integrity of character, made him a born ruler.

Was it not thanks to his fierce determination that Poland was reborn ? As a young man he had revivified the corpse of Polish independence by editing a Socialist news sheet from a cellar in Lodz, the dingy Manchester of Poland. For this cause he had lain in a Siberian prison and had eaten the hard bread of exile. In 1914, finder the shelter, of the Central Powers, he collected thoSe legions which were the future Polish army. We know what followed. Those Powers found him a dan- gerons instrument ; and in 1917, the German Governor- General Beseler clapped him into gaol at Magdeburg: With the outbreak of revolution he was released and returned to Warsaw. The same evening lie was master of Poland. " I didn't even have to bend down to pick power up," said Pilsudski himself.

Within a few weeks he was Chief of State in name as well. Four years later he resigned his position in favour of his friend Narutowicz, who was shot down by a fanatical National Democrat at the opening of an exhibition in the British Legation. This party of " malicious dwarfs who sit on my shoulders," as he called them in his famous speech in the Hotel Bristol at Warsaw, came to power, and he resigned his post as chief of the General Staff and grumblingly awaited his time in his modest country house. It came soon. The hurly-burly of Polish party ,politics brought on one crisis after another. Pilsudski suddenly appeared before the Presi- dent, the weak Wojciechowski, and handed him some obscurely-worded demands for the reorganization of the army. Nobody understood them and therefore they caught the imagination of the people. Pilsudski made the unfortunate President read the document aloud, and as he left growled out within his hearing : " I'm going to blow out that taper now." (It should be explained that the cadaverous President resembled nothing so much as a candle in shape.) Three months later the candle was out and Pilsudski sat in-. solitary glory in the . Belvedere.

The Marshal was -no lover of words. Like so many men of action, he hated the written word, the twisted diplomatic explanations and law mutilated - in the Pro. crustes' bed of paragraphs. After his coup d'etat he sent for some M.P.s and told them to behave themselves, otherwise the whip would crack. When the new master of Poland made his debut as a broadcaster the whole country waited with bated breath for his pronouncements on the national future.; but Pilsudski delivered no state- ment of policy and issued no manifesto. Instead, he told an impromptu fairy-story for the benefit .of the children. It dealt with the adventures of a frog-king and a fairy. Photographs _taken at the_time_ show him in his simple military tunic, h4 collar unfastened, sitting 'before the microphone. On either side clung his_ little daughters, hanging on every word.

About this time his former Socialist comrades came to the Belvedere to beg him to put into practice the Socialist ideals he had preached in his youth. Pilsudski listened attentively and made a reply which gives 'an instructive insight into his political thought : " My friends, you and I caught the Socialist train to- gether. I got off at ' Polish Independence ' Station. I -wish you the best of luck in your journey on to Utopia." - Pilsudski was personally lovable. He liked telling stories of the past and used vigorous and picturesque language in doing so. He loved a good repartee.. I re- member a reception in 1927 in honour of the unveiling of the Chopin memorial in Warsaw. Musicians came from the Whole of Europe to do homage to the Franco-Polish genius. Pilsudski spoke alternate French and German with the guests. When the Austrian composer, Josef Marx, praised his German, the Marshal, alluding aptly to his detention in Magdeburg, said, with a sardonic smile, Yes, but my accent is a bit Magdeburgish ! "

The years rolled by. Pilsudski showed himself to the people less and less often-; only his most intimate friends were received. He became a legend._ Even his_ opponents . saw in him the personification of the Polish spirit. In 1983, on the 250th anniversary, of Sobieski's victory before the walls of Vienna, all Poland had gathered in the' Chapel of the famous royal castle at Krakow. At the front of the choir stood the President, the Ministers, 'generals,. diplo- mats and high dignitaries. They filled the left-hand half of the choir. The Marshal came Slowly out of the Crypt, after placing a wreath on the tomb of his great prede- cessor Sobieski. In his field-grey tunic, his shoulders a little stooping, his eyes blazing, out from underneath, bushy eyebrows, he took a place by himself on the right of the choir. While _ Archbishop Sapieha of KrakoW, looking a mediaeval. prelate to the life, celebrated the service and led the Te Deum, Marshal Pilsudski remained stern and impassive. But when at the end of the service the flower of the Polish State sang the ancient National Anthem, " Bore cos. Polska," he was overcome. -He had lived to see Poland stable and free. His eyes were wet and. I saw a great tear roll down his cheek.

Then I remembered that every 250 years brought Poland. a great leader to rescue her from ignominy.

The last was called Josef Pilsudski.