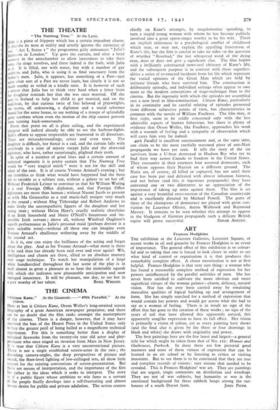 HERE at last is Citizen Kane, Orson Welles's long-awaited screen biography of a great American newspaper proprietor, and there can be no doubt that the film ranks amongst the masterpieces of the cinema. There is a danger, however, that it may have survived the ban of the Hearst Press in the United States only to face the greater peril of being hailed as a magnificent technical experiment. For this is something better than a display of technical fireworks from the twenty-six year old actor and play- producer who once staged an invasion from Mars in New Jersey. It is true that Citizen Kane is a very unconventional picture. There is not a single established screen-actor in the cast ; the distorting camera-angles, the deep perspectives of picture and sound, the floor-level lighting of low-ceilinged sets, all show little respect for the existing conventions of screen-presentation. But these are means of interpretation, and the importance of the film lies rather in the ideas which it seeks to interpret. The story is of a public figure whose ambition to win fame as a servant of the people finally develops into a self-frustrating and almost insane desire for public and private adulation. The action centres chiefly on Kane's attempts, by megalomaniac spending, to turn a stupid young woman with whom he has become publicly involved into a great opera-singer worthy to be his wife. There are implicit references to a psychological conflict of childhood which may, or may not, explain the appalling frustration of Kane's life, but the film is careful to take no sides on the question of whether " Rosebud," the last whispered word of the dying man, does or does not give a significant clue. The film begins with a brilliantly constructed news-reel obituary of Kane's life, and the subsequent purpose is to contrast with these superfici- alities a series of re-enacted incidents from his life which represent the varied opinions of the Great Man which are held by intimate friends who have survived him. The construction is deliberately episodic, and individual settings often appear to owe more to the modern conceptions of stage-technique than to the cinema. But the ingenuity with which the episodes are assembled sets a new level in film-construction. Citizen Kane, particularly in its continuity and its careful relating of episodes presented from different subjective points of view, has characteristics in common with the novels of William Faulkner. The film may, at first sight, seem to be coldly concerned only with the less admirable aspects of human behaviour, but there is plenty of evidence that Orson Welles, like Faulkner, approaches his work with a warmth of feeling and a sympathy of observation which will carry him very far indeed.

49th Parallel is excellent entertainment and, at the same time, can claim to be the most carefully reasoned piece of anti-Nazi propaganda we have yet seen. It tells the story of the six survivors from a U-boat destroyed in Hudson Bay who try to find their way across Canada to freedom in the United States. They encounter in their journeys four assorted democrats, each of whom opposes their Nazism on a different ground. The Nazis are, of course, all killed or captured, but not until their case has been put and defeated with almost inhuman fairness, and not before (and this is ingenious propaganda) they have converted one or two dilettantes to an appreciation of the importance of taking up arms against them. The film is set against a very beautiful cross-section of the Canadian countryside and is excellently directed by Michael Powell. The parts of three of the champions of democracy are played with great con- viction by Laurence Olivier, Anton Wal brook and Raymond Massey. It remains to be seen whether this attempt to oppose to the bludgeon of German propaganda such a delicate British