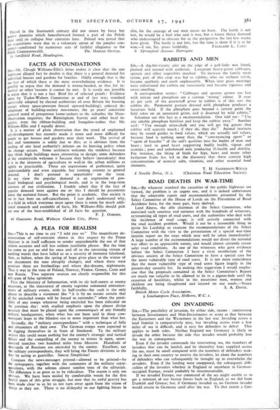 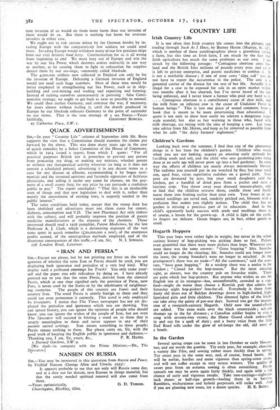 Sm,—The possibility of invasion, by either side, causes : controversy between Invasioneers and Non-Invasioneers as acute as that between the Easterners and the Westerners in the last war. Invading across a land frontier is comparatively easy, but invading across even a few miles of sea is difficult, and is easy for defenders to defeat This applies to both sides. Neither England -nor Germany is likely to invade the other because the side that invades would probably lose the war in consequence.

If we invaded Europe, our command of the sea might enable us to get a remnant of our beaten forces back to. England, as we did from Dunkirk and Greece; but, if Germany. invaded us, no German invader would return to Germany until after the war. To that extent a Ger- man invasion of us would do them more harm than our invasion of them would do us. But there is nothing but harm for overseas invaders in either case.

We ought not to risk certain defeat by the German hordes by in- vading Europe with the comparatively few soldiers we could send there. Invading Europe would withdraw many of our few precious ships from our vital Atlantic food ferry. Continentalism for us is all wrong from beginning to end We must keen out of Europe and win the war by our Sea Power which destroys armies indirectly in one way or another, as by causing them to fight to exhaustion for supplies denied them by our sea-siege, commonly called blockade.

The 4,000,000 soldiers now collected in England can only be for the invasion of Europe. Defeating a German invasion of England would not need such huge numbers. Most of these men would be better employed in strengthening our Sea Power, such as in ship- building and coal-mining and trading and exporting and farming. Instead of ruining ourselves unnecessarily in pursuing - false Conti- nentalist strategy, we ought to get back as near as possible to normal. We could then outlast Germany, and continue the war, if necessary, for years almost without feeling it, until the dearth produced in Europe by our blockade exhausts Germany to the point of surrender on our terms. That is the true strategy of a sea Power.—Yours