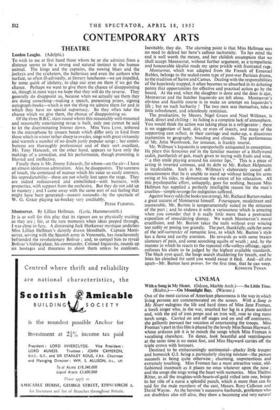 Montserrat. By Lillian Hellman. (Lyric, Hammersmith.) IT is as well

for this play that its rigours are as physically exciting as they are ; for, at the rare moments when ideas peeped through, I was close to fury. A distressing Jack Harkaway mystique underlies Miss Lillian Hellman 's daintily drawn bloodbath. Captain Mont- serrat, serving with the Spanish army in Venezuela, has treacherously befriended the revolutionary Bolivar ; and, to compel him to reveal Bolivar 's hiding-place, his commander, Colonel Izquierdo, rounds up six hostages and threatens to shoot them unless he confesses. Inevitably, they die. The alarming point is that Miss Hellman sees no need to defend her hero's callous taciturnity. To her mind the end is well worth the means, and her childish assumption that we shall accept Montserrat, without further argument, as a'sympathetic and honourable idealist made my spine prickle with frustrated rage. Montserrat, which was adapted from the French of Emanuel Robles, belongs to the sealed-room type of post-war Parisian drama, to the tradition of Sartre and Camus. Dealing with the responsibilities of the hopelessly trapped, it often becomes so absorbed in its debating points that opportunities for effective and practical action go by the board. At the end, when the slaughter is done and the door is ajar, Montserrat and the butcher Izquierdo are left alone. Montserrat's obvious and feasible course is to make an attempt on Izquierdo's life ; but no such barbarity ! The two men seat themselves, take a little refreshment, and relentlessly reminisce.

The production, by Messrs. Nigel Green and Noel Willman, is .loud, direct and chilling : its failing is a complete lack of atmosphere. You would think the action was taking place in a refrigerator ; there is no suggestion of heat, dirt, or even of insects, and many of the supporting cast reflect, in their carriage and make-up, a disastrous inattention to geography, breeding and climate. The performance of Mr. John Westbrook, for instance, is frankly tourist.

Mr. Willman's Izquierdo is unexpectedly antiquated in conception. He plays this ferocious oaf in the familiar manner of a Hollywood sadist, pantherish of gait, much given to toying with fruits and wine, "a thin smile playing around his sinister lips." This is a piece, of acting in inverted commas, and its debt to Mr. Robert Helpmatin is incalculable. Such is Mr. Willman's elaborately casual self- consciousness that he is unable to stand up without letting his arms swing at his sides, to demonstrate the extent of his relaxation. All this psychopathic effort, unhappily, goes for nothing, because Miss Hellman has supplied a perfectly intelligible reason for the man's cruelties—simple revenge for indignities suffered.

Against heavy odds (he looks too strong), Mr. Richard Burton makes a great success of Montserrat himself. Foursquare, recalcitrant and tmcoaxable, Mr. Burton is temperamentally suited ,to the reticence of the part ; and he endows it with a variousness which is amazing when you consider that it is really little more than a protracted exposition of smouldering dismay. We watch Montserrat's moral crucifixion, and Mr. Burton takes the nails without ever wincing too nobly or posing too grandly. The part, thankfully, calls for none of the self-surrender of romantic love, to which Mr. Burton's style has a fierce and earthy aversion. He rewards us with some brazen clamours of pain, and some scorching squibs of wrath ; and, by the manner in which he reacts to the repeated rifle-volleys offstage, again enforces his claim to be judged by the highest available standards. The black eyes quail, the lungs search shuddering for breath, and he bites his clenched fist until you would swear it bled. And—all else apart—Mr. Burton here proves, for the first time, that he can weep.