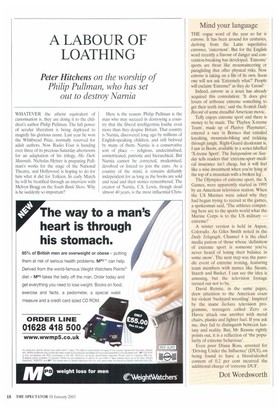 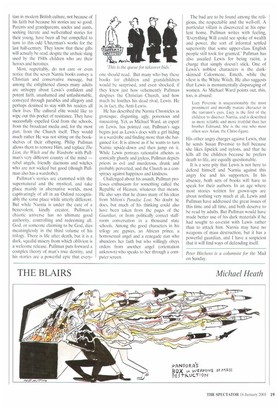 A LABOUR OF LOATHING

Peter Hitchens on the worship of

Philip Pullman, who has set out to destroy Narnia

WHATEVER the atheist equivalent of canonisation is, they are doing it to the children's author Philip Pullman. The full power of secular liberalism is being deployed to magnify his glorious name. Last year he won the Whitbread Prize, normally reserved for adult authors. Now Radio Four is handing over three of its precious Saturday afternoons for an adaptation of his trilogy, His Dark Materials. Nicholas Hytner is preparing Pullman's works for the stage of the National Theatre, and Hollywood is hoping to do for him what it did for Tolkien. In early March he will be beatified through an interview with Melvyn Bragg on the South Bank Show. Why is he suddenly so important? Here is the reason: Philip Pullman is the man who may succeed in destroying a country that the liberal intelligentsia loathe even more than they despise Britain. That country is Narnia, discovered long ago by millions of English-speaking children, and still beloved by many of them. Narnia is a conservative sort of place — religious, undecimalised, unmetricated, patriotic and hierarchical. But Narnia cannot be corrected, modernised, devolved or forced to join the euro. As a country of the mind, it remains defiantly independent for as long as the books are sold and read and their stories remembered. The creator of Narnia, C.S. Lewis, though dead almost 40 years, is the most influential Chris tian in modern British culture, not because of his faith but because his stories are so good. Parents and grandparents, uncles and aunts, seeking literate and well-crafted stories for their young, have been all but compelled to turn to this odd Ulsterman's works for the last half-century. They know that these gifts will actually be read, despite the archaic slang used by the 1940s children who are their heroes and heroines.

Most, regrettably, do not care or even notice that the seven Narnia books convey a Christian and conservative message, but among the enlightened classes many adults are unhappy about Lewis's confident and potent faith, unashamed and unfashionable, conveyed through parables and allegory and perhaps destined to stay with his readers all their lives. The cultural elite would like to wipe out this pocket of resistance. They have successfully expelled God from the schools, from the broadcast media and, for the most part, from the Church itself. They would much rather He was not sitting on the bookshelves of their offspring. Philip Pullman allows them to remove Him, and replace The Lion, the Witch and the Wardrobe with Pullman's very different country of the mind — rebel angels, friendly daemons and witches who are not wicked but good (though Pullman also has a wardrobe).

Pullman's stories are crammed with the supernatural and the mystical, and take place mainly in alternative worlds, most captivatingly of all in an Oxford recognisably the same place while utterly different. But while Narnia is under the care of a benevolent, kindly creator, Pullman's chaotic universe has no ultimate good authority, controlling and redeeming all. God, or someone claiming to be God, dies meaninglessly in the third volume of his trilogy. There is life after death, but it is a dark, squalid misery from which oblivion is a welcome release, Pullman puts forward a complex theory of man's true destiny, and his stories are a powerful epic that every one should read. But many who buy these books for children and grandchildren would be surprised, and even shocked, if they knew just how vehemently Pullman despises the Christian Church, and how much he loathes his dead rival, Lewis. He is, in fact, the Anti-Lewis.

He has described the Narnia Chronicles as grotesque, disgusting, ugly, poisonous and nauseating. Yet, as Michael Ward, an expert on Lewis, has pointed out, Pullman's saga begins just as Lewis's does with a girl hiding in a wardrobe and finding more than she bargained for. It is almost as if he wants to turn Narnia upside-down and then jump on it. While Lewis portrays rationalist atheists as comically ghastly and joyless, Pullman depicts priests as evil and murderous, drunk and probably perverted, and the Church as a conspiracy against happiness and kindness.

Challenged about his assault, Pullman professes enthusiasm for something called the Republic of Heaven, whatever that means. He also says that he draws many of his ideas from Milton's Paradise Lost. No doubt he does, but much of his thinking could also have been taken from the pages of the Guardian, or from politically correct staffroom conversation in a thousand state schools. Among the good characters in his trilogy are gpsies, an African prince, a homosexual angel and a renegade nun who abandons her faith but who willingly obeys orders from another angel (orientation unknown) who speaks to her through a computer screen. The bad are to be found among the religious, the respectable and the well-off. A particular villain is discovered at his opulent home, Pullman writes with feeling, 'Everything Will could see spoke of wealth and power, the sort of informal settled superiority that some upper-class English people still took for granted.' Pullman has also assailed Lewis for being racist, a charge that simply doesn't stick. One of Lewis's noblest characters is the darkskinned Calormene, Emeth, while the vilest is the White Witch. He also suggests that Lewis is monumentally disparaging of women. As Michael Ward points out, this, too, is absurd:

Lucy Pcvcnsic is unquestionably the most prominent and morally mature character in the narrator's eyes. Lucy is the first of the children to discover Narnia, and is described as more reliable and more truthful than her brother Edmund. She is the one who most often sees Asian, the Christ-figure.

His other angry charges against Lewis, that he sends Susan Pevensie to hell because she likes lipstick and nylons, and that he kills all the children because he prefers death to life, are equally questionable.

It is a sore pity that Lewis is not here to defend himself and Narnia against this angry foe and his supporters. In his absence, both sets of books will have to speak for their authors. In an age where most stories written for grown-ups are about nothing very much at all, Lewis and Pullman have addressed the great issues of this time and all time, and both deserve to be read by adults. But Pullman would have made better use of his dark materials if he had sought to co-exist with Lewis rather than to attack him. Narnia may have no weapons of mass destruction, but it has a powerful guardian, and I have a suspicion that it will find ways of defending itself.

Peter Kitchens is a columnist for the Mail on Sunday.