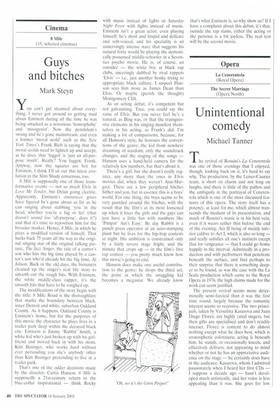 You can't get steamed about everything. I never got around to getting mad about Eminem during all the time he was being attacked as a notorious 'homophobe' and 'misogynist'. Now the pendulum's swung and he's gone mainstream, and even a former 'moral scold' such as the Nevv York Times's Frank Rich is saying that the moral scolds need to lighten up and accept, as he does, that 'faggot' is 'just an all-purpose insult'. Really? You faggot, Frank. Anyway, now the squares are hot for Eminem, I think I'll sit out this latest evolution in the Slim Shady consensus, too.

8 Mile is supposedly one of those transformative events — not so much Elvis in Love Me Tender, but Dylan going electric. Apparently. Eminem's eminences grises have figured he's gone about as far as he can singing about stabbing 'you in the head, whether you're a fag or lez' (that doesn't sound too 'all-purpose', does it?) and that it's time to reposition him for the broader market. Hence, 8 Mile, in which he plays a modified version of himself. That harks back 75 years all the way to the original singing star of the original talking picture, The Jazz Singer, the tale of a cantor's son who hits the big time played by a cantor's son who'd already hit the big time, AI Jolson. Back in the old days, the biotuners cleaned up the singer's real life story to smooth out the rough bits. With Eminem, the white middle-class rapper, it's the smooth bits that have to be roughed up.

The modifications of the story begin with the title: 8 Mile Road is the thoroughfare that marks the boundary between black, inner Detroit and white, suburban Oakland County. As it happens, Oakland County is Eminem's home, but for the purposes of this movie the character he plays lives in a trailer park deep within the decayed black city. Eminem is Jimmy 'Rabbit' Smith, a white kid who's just broken up with his girlfriend and moved back in with his mom, Kim Basinger, who works hard without ever persuading you she's anybody other than Kim Basinger pretending to live in a trailer park.

That's one of the odder decisions made by the director, Curtis Hanson. 8 Mile is supposedly a 21st-century return to the blue-collar inspirational — think Rocky with music instead of fights or Saturday Night Fever with fights instead of music. Eminem isn't a great actor, even playing himself: he's short and limpid and delicate and soft-voiced, and his speciality is an unnervingly intense stare that suggests his natural forte would be playing the demonically possessed middle-schooler in a Seventies psycho movie. He is, of course, an outsider — the white boy at black rap clubs, sneeringly dubbed by rival rappers 'Elvis' — i.e., just another honky trying to appropriate black culture. I suspect Hanson sees him more as James Dean than Elvis. Or maybe (perish the thought) Montgomery Clift.

As an acting debut, it's competent but not galvanising. True, you could say the same of Elvis. But you never feel he's a natural, as Bing was, or that the transgressive elements in his singing manifest themselves in his acting, as Frank's did. I'm making a lot of comparisons, because, for all Hanson's style, he honours the conventions of the genre: the kid from nowhere dreaming of stardom; only the soundtrack changes, and the staging of the songs — Hanson uses a hand-held camera for the relatively few numbers, but that's about it.

There's a girl, but she doesn't really register, any more than the ones in Elvis movies did, when they weren't Ann-Margret. There are a few peripheral bitches hither and yon, but in essence this is a boys' world. For one thing, the boys seems to be very guarded around the bitches, with the result that the film's at its most loosened up when it loses the girls and the guys can just have a little fun with numbers like 'Pimpin' Ain't Easy'. By day Rabbit is a punch press operator at an auto-stamping plant but he lives for the hip-hop contests at night. His ambition is constrained only by a fairly severe stage fright, and the minute that crops up — in the film's first rap contest — you pretty much know how this movie's going to end.

Hanson does make one useful contribution to the genre: he drops the third act, the point at which the struggling kid becomes a megastar. We already know that's what Eminem is, so why show us? If I have a complaint about this debut, it's that, outside the rap slams, either the acting or the persona is a bit joyless. The real test will be the second movie.