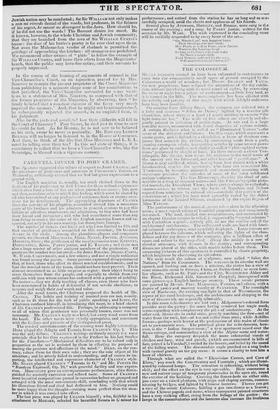 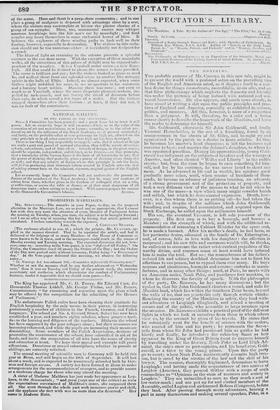 11C.,1A.N ingenuity seemed to have been exhausted in contrivances to cram into the comparatively small spitee of ground occupied by the Colosseum a world of wonders ; but :Messrs. Iliestistsi and YAms, the new proprietors, have eelipsed the attractious of the day exhibi- tion, without interfering with its usuil round of sights, by converting the scene at night into a palace of enchantment —a link fairy land, as it is termed in the bills. The nictmoorphosis has been effected witlt the celerity and potency of that magic with which Adelphi audiences have long been familiar.

On en tel hig fiont Albany Street. the company are ushered into a II lolly and spacious " I ui I ule Dause," lighted hy a massive gilt chandelier, wlwre there is a band t.f musie inviting to exercise " the light fantastic toe." '1 ii walls of this saloon are chastely and ele- gantly painted in imitation of much it: et tire. At one end is a large tent-like recess, ornamented witit ileted it of various colours. A curtain discloses what is called mu i i " Illuminated Terrace "—the scene of the different exhihitions. On this t-tage, which represents a scenic grove, am] is lighted by a chandelier, a brace of dextrous con- jurors first astonish the visiters, by sauna:oiling curds from a pack, growing extempore salads, transporting al tides by some unseen power f.rom one place to another. alai mi uumil mm so-called " philosophical recrea- tions," performed by sleight of hand. To them succeeds a clever Ven- triloquist, Mr. Suomi., who treats his audience to the vocal music of the nursery and the farm-yard, and other feats of " gastriloque." .A Statue is next exhibited. %vine!), !Irving been first du:Acd with a white handkerchief, startles the spectators, who have net recognized Mr. Titomesos:, by becoming ailimatcd, and successively assuming with statuesque precision the attitudes of some of the most celebrated antique sculpturt.s. The Gas Mierosrope. showing the shoal of ani- malculie in a drop of stagolant water—and Mr. Urni.nr:'s popular picto- rial marvels, the Dissolvent Views, where groves change to cathedrals, SU111111CL.SCCIICS to winter, and the busts of Naltulcon and Nelson expand from miniature to colossal slime—col:elude this Imitian of the entertainment ; which has been most agreeably varied by the dulcet harmonies of the Musical Glasses, awakened t:y the expert fiegcrs of :Miss TAYLOR.

The performance of the musical slasses takes place in the adjoining room ; a most superb saloon of beautiful proportions, and sumptuously decorated. The roof, divided into compartments, and surrounded by an elegant Grecian cornice in relief, is supported by " crystal columns" with Corinthian capitals, entirely gilt, as are the cornice and all the architectural enriehtnents. The ceiling and walls are lined with fanci- ful coloured arabesques, most tastefully displayed. Large mirrors are placed between the columns, which reflecting the lights of the chan- deliers and the gay dresses of the company, give a brilliant effect of space and colour to the crap.rheit. Along the middle is a row of circular ottomans, with flowers in the centre; and corresponding divans are placed at the sides, with marble tables before them. The surpassing richness of this apartment is controlled by classic propriety, which heightens by chastening its splendour. We next reach the saloon of sculpture, now called " Salon des Nations," from its Costnorama. The recesses in its circular wall are opened, and looking out as from a window, the visiter has a view of sonic romantic scene in Greece, (7liiria, or Switzerland; or more fami- liar objects, such as St. Paul's and the City, Westminster Abbey and the River, Richmond Hill, Greenwich Hospital; interspersed with some *tines:lee English landscepe scenery. These scenic pictures are painted by Alessrs. PITT, MAtistimi., Pmutts, and others, with a degree of power and mastery worthy of STANFIELD. The moonlight view of Rochester, the evening sun.light in that of Westminster, the repose of the rural landscape, and the architecture and shipping in the view of Greenwich, are especially admirable. In this room refreslunents are laid out ; AIelpomene's colossal form presides over the pastry : the IIMSe having removed her tragic mask, seems regarding with cotnplacency the piks of confectioaery. At the other end, Moses sits in awful suite, gravely watching the flow—not of water from the rock, bat—of tea and coffee from urns; while Achilles frowns—perhaps with horror at the profanation of this realm of classic art to gastronomic uses. The principal place for refreshments, how- ever, is the " Indian Supper-room ;" a new apartment raised over the Swiss cottage, and commanding a view of the Alpine scene and water- fall. Here the company despatch the more substantial viands of chicken and ham, wine and punch, (which are enumerated in bills of fare, priced a la Vauxhall>) cooled by the breeze,and lulled by the sound of the falling water. The disconsolate eagle perched on a crag looks with cynical gravity on the gay scene: it seems a charity to toss him a bone of chicken.

Through what are called the " Eleusinian Cavern, and Cave of Elora," you reach the Conservatory and Fountain ; which are illumi- nated by coloured lamps. The sensation is refreshing, without being chill; and the effect on the eye is very agreeable. Here commence a new and narrow range of temporary promenades in the open air, round the exterior of time building. Crossing the flower-beds on either side, you enter on a raised platform, with steps and sloping ascents, commu- nicating by bridges, and lighted by Chinese lanterns. Thence you get a view of the scenic Colossus, holding a gas sun-flower as a beacon; and the Chinese pagoda and dome, whose transparent painted structures have a very striking effect, rising from the foliage of the garden :. the lamps in the conservatories and the lanterns also increase the liveliness.

of the scene. Here and there is a peep. show cosmorama ; and in one place a group of sculpture is disposed with advantage close by a seat, where the visiters may contemplate at leisure the plaster charms of a group of sea-nymphs. Here, too, sentimental swains may whisper amorous breathings into the fair one's ear by moonlight ; and fond couples may fancy themselves in some enchanted bower of bliss. It behoves the explorers of these winding paths to look well to their footing, however, especially in descending. The visiters to this scan- sion should not be too numerous either : it is evidently not designed for a crowd.

The blaze of light on returning to the saloons presents a splendid contrast to the out-door scene With the exception of these moonlight walks, all the attractions of this palace of delight may be enjoyed inde-

pendent of the weather. It is a %Taw:ball under cover—a new Haste- lagh. All that could be devised to please the senses is here provided. The scene is brilliant and gay ; but the visiters looked as grave as need be, and walked about from (me splendid scene to another like unhappy spirits in the halls of Eblis. Indeed, we almost expected, when some listless wight unfolded his arms, to see an aperture in his waistcoat, and a burning heart within. Dancing there was none ; not even so much as at Vauxhall, where the more desperate pleasure-seekers' im- pelled by rack-punch, and not having the dread of decorum before

their eyes, do whisk round a few turns of a waltz. But the visiters enjoyed themselves after their fashion : at least, if they did not, it was no fault of the entertainers.