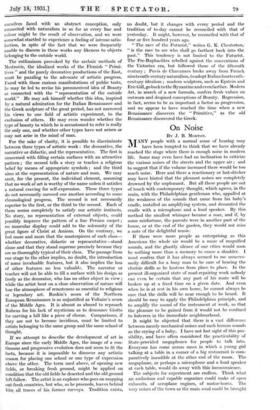 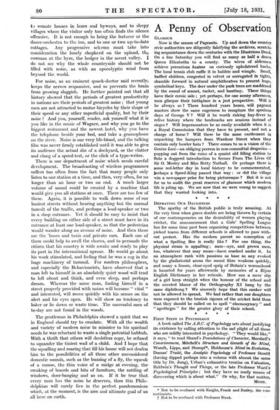 MANY people with a normal sense of hearing may have been tempted to think that we have already reached the stage where there is enough noise in modern life. Some may even have had an inclination to criticize the various noises of the streets and the upper air ; and to suggest that if the volume increased there would be too much noise. Here and there a reactionary or last-ditcher may have hinted that the pleasant noises are completely drowned by the unpleasant. But all these people are out of touch with contemporary thought, which agrees, in the main, with the Philadelphian gentleman who, appalled at the weakness of the sounds that came from his baby's cradle, installed an amplifying system, and decorated the cradle with a microphone and a loud speaker. By this method the smallest whimper became a roar, and if, by some misfortune, the parents were in another part of the house, or at the end of the garden, they would not miss a note of the delightful music.

If there were more people as enterprising as this American the whole air would be a maze of magnified sounds, and the ghastly silence of our cities would soon be nothing more than a memory to cause a shudder. I must confess that it has always seemed to me unneces- sarily difficult for a busy man to be sure of hearing the electric drills as he hastens from place to place. In the present ill-organized state of road-repairing work nobody can even be certain that any part of his route will be broken up at a fixed time on a given date. And even when he is at rest in his own home, he cannot always be sure that the drills will be near enough to be heard. It should be easy to apply the Philadelphian principle, and to amplify the sound of the instrument at work, so that the pleasure to be gained from it would not be confined to loiterers in the immediate neighbourhood.

It might be objected that there is a vast difference between merely mechanical noises and such human sounds as the crying of a baby. I have not lost sight of this pos- sibility, and have often considered the practicability of State-provided megaphones for people to talk into. Everyone has come across cases in which a young girl talking at a table in a corner of a big restaurant is com- paratively inaudible at the other end of the room. The megaphone, or perhaps a microphone and a loud speaker at each table, would do away with this inconvenience.

The subjects for experiment are endless. Think what an audacious and capable organizer could make of open exhausts, of aeroplane engines, of motor-horns. The very noises of the town or the main road could be brought to remote houses in lanes and byways, and to sleepy villages where the visitor only too often finds the silence offensive. It is not enough to bring the lecturer or the dance-orchestra to the inn, and to one or two up-to-date cottages. Any progressive sch eme must take into consideration the lonely shepherd on the upland, the cowman at the byre, the hedger in the secret valley. I do not see why the whole countryside should not be filled with noise, as with an apocalyptic wind from beyond the world.

For noise, as an eminent quack-doctor said recently, keeps the nerves responsive, and so prevents the brain from growing sluggish. He further pointed out that all history showed that the periods of greatest productivity in nations are their periods of greatest noise ; that young men are not attracted to motor bicycles by their shape or their speed or any other superficial quality, but by their noise 1 And you, yourself, reader, ask yourself what it is you like in the music of. Wagner, and why you go to the biggest restaurant and the newest. hotel, why you have the telephone beside your bed, and take a gramophone on the river. Noise is our very life-blood, and the talking film was never firmly established until it was able to give its audience the actual din of a dockyard, or the clatter and clang of a speed-test, or the click of a type-writer.

There is one department of noise which needs careful development. The broadcasting of wireless programmes suffers too often from the fact that many people only listen to one station at a time, and then, very often, for no longer than an hour or two on end. A much larger volume of sound could be created by a machine that would give you all stations at once. There are too few of these. Again, it is possible to walk down some of our busiest streets without hearing anything but the normal tumult of the traffic, and perhaps a loud-speaker or two in a shop entrance. Yet it should be easy to insist that every building on either side of a street must have in its entrance at least one loud-speaker, SG that the pedestrian would wander along an avenue of noise. And then there are the 'buses and taxis and private cars. Each one of them could help to swell the chorus, and to persuade the citizen that his country is wide awake and ready to play its part in the international uproar. He would go about his work stimulated, and feeling that he was a cog in the huge machinery of turmoil. For modern philosophers, and especially the Behaviourists, have observed that a man left to himself in an absolutely quiet wood will tend to loll about and think, and even sleep, and perhaps dream. Whereas the same man, finding himself in a street properly provided with noises will become " vital " and interested, will move quickly with his senses on the alert and his eyes open. He will show no tendency to loiter or lie down or waste time. The successful men of to-day are not found in the woods.

The gentleman in Philadelphia showed a spirit that we in England should try to emulate. With all the wealth and variety of modem noise to minister to his spiritual needs he was reluctant to waste a single potential hubbub. With a thrift that others will doubtless copy, he refused to squander the tiniest wail of a child. And I hope that the squalling and roaring that fill his house will not deafen him to the possibilities of all those other unconsidered domestic sounds, such as the buzzing of a fly, the squeak of a mouse, the thin voice of a midge at evening, the creaking of boards and bits of furniture, the rattling of windows, door-banging and so on. If it be true that- every man has the noise he deserves, then this Phila- delphian will surely live in the perfect pandemonium which, at the moment, is the 'aim and ultimate goal of us all here on earth.