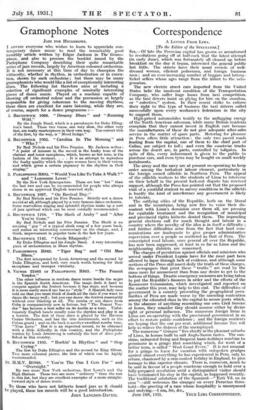 A LEITER FROM LIMA.

[To the Editor of the SPECTATOR.] SIR,—Of late the Peruvian capital has grown so accustomed to revolutions going off at half-cock that the latest attempt (in early June), which was fortunately all cleared up before breakfast on the day it began, interested the general public but little. The streets have their usual crowds of well- dressed women, efficient policemen, and foreign business men ; and an ever-increasing number of beggars and lottery- ticket sellers whose ages range from the infant to the octo- genarian.

The new electric street cars imported from the United States belie the insolvent condition of the Transportation Company, who suffer huge losses from taxi competition, as the taxi drivers insist on plying for hire on the omnibus, or " colectivo," system. In their recent strike to enforce their right to this type of business the taxi drivers called successfully upon every workmen's federation in the city to support them.

High-priced automobiles testify to the unflagging energy of the North American salesman, while many British residents complain that they cannot invest in English cars because the manufacturers of these do not give ade9uate after-sales service in the matter of spare parts. Motoring for pleasure in Peru offers little attraction : the only two paved roads leading from the capital, one of them to the chief port of Callao, are subject to toll ; and even the coastwise tracks across the desert are, in parts, controlled by tollgates. In spite of this, every inducement is given to the public to purchase cars, and even tyres may be bought on small weekly instalments.

order among the turbulent labour element, particularly in the foreign owned oilfields in Northern Peru. The appeal of the oilfields workers to the students of Lima to intervene on their behalf in the present lock-out dispute has received support, although the Press has pointed out that the proposed visit of a youthful student to survey conditions in the oilfields is hardly the kind of interference any government is likely to tolerate.

The outlying cities of the Republic, both on the Moral and in the mountains, being now free to voice their dis- content with Lima's dominion over them all, are pressing for equitable treatment and the recognition of municipal and provincial rights hitherto denied them. The impending general elections call for much thought and labour in a country where the novelty of the idea is in itself a difficulty ; and further difficulties arise from the fact that land com- munications are inadequate to give proper administrative supervision over a people so scattered as that of Peru. The conscripted road labour, once general all over the Republic, has now been suppressed, at least in so far as Lima and the neighbouring districts are concerned. The charges of peculation against officials and ministers who

served under President Leguia have for the most part been allowed to lapse through lack of evidence, and although some sections of the Press still assert daily the truth of these charges, the newspapers that print these truths " are read by the mass more for amusement than from any desire to get to the bottom of things. Drastic emergency measures are being taken to put the Republic's finances m order and the efforts of the Kemmerer Commission, which investigated and reported on the matter this year, may help to this end. The difficulties of government in a country presenting the geographical pecu- liarities of Peru are made worse by the unending contention among the educated class in the capital to secure posts which, in the absence of anything resembling our own Civil Service at home, they consider they should assume either by divine right or personal influence. The numerous foreign firms in Luna are co-operating with the provisional government in an effort to restore public confidence ; and the foreign residents are hoping that the one per cent. additional Income Tax will help to relieve the distress of the unemployed.

The numerous " Gringos " live chiefly in the pleasant suburbs

of Lima, in homes built to suit Anglo-Saxon tastes. The sun- shine, unhurried living and frequent bank-holidays combine to germinate in a gringo that something which, for want of a better term, is called " West Coast Fever." It is not unusual for a gringo to leave for vacation with outspoken grudges against almost everything he has experienced in Peru, only to return, chastened by a rain-soaked holiday in England, to give homage to this superior climate. There is, moreover, much to be said in favour of a people courteous enough to hold over a fully-prepared revolution until a distinguished visitor should have terminated his stay in the capital, as happened recently. The traditional salutation of the Spaniard—" Esti Vd. en su cuss "—still welcomes the stranger on every Peruvian thres- hold—the greeting of a race whose hospitality is unsurpassed and undying.—I am, Sir, &c., June 16th, 1931. Yours LIMA CORRESPONDENT.