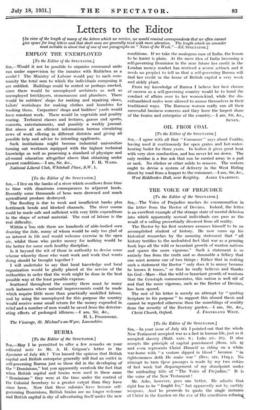 [In view of the length of many of the letters which we receive, we would remind correspondents that we often cannot give space for long letters and that short ones are generally read with more attention. The length which we consider most suitable is about that of one of our paragraphs on "News of the Week."—Ed. SPECTATOR.]

[To the Editor of the SPECTATOR.] Sta,—Would it not be possible to organize communal units run under supervision by the inmates with Ruhleben as a model ? The Ministry of Labour would pay to each com- munity the total sum to which the individuals composing it are entitled. Buildings could be rented or perhaps erected, since there would be unemployed architects as well as unemployed bricklayers, stonemasons and plumbers. There would be cobblers' shops for making and repairing shoes, tailors' workshops for making clothes and laundries for washing them. Carpenters' shops and builders' yards would have constant work. There would be vegetable and poultry rearing. Technical classes and lectures, games and sports, concerts, entertainments, and possibly a weekly journal. But above all an efficient information bureau circulating news of work offering in different districts and giving all possible help and advice to intending applicants.