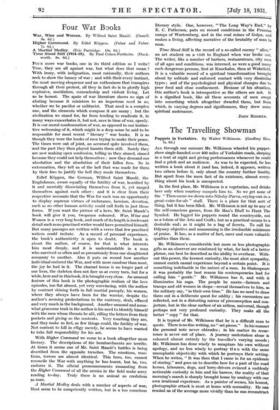 FOUR more war books, one in its third edition as I write True, they are all against war, but what does that mean ? With irony, with indignation, most rationally, their authors seek to show the lunacy of war ; and with their every instinct, the most moving eloquence and an enthusiasm that transpires through all their protest, all they in fact do is to glorify high explosive, mutilation, comradeship and violent living. Let us be honest. The spate of war literature shows no sign of abating because it ministers to an imperious need in us, whether we be pacifist or militarist. That need is a complex one, and the elements which compose it are many ; but the civilization we stand for, far from tending to eradicate it, in many ways exacerbates it, but not, save in time of war, openly. It is our moral condemnation of war, as opposed to our instinc- tive welcoming of it, which might in a deep sense be said to be responsible for most recent " literary " war books. It is as though they were the books of men trying to make their peace. The times were out of joint, an accursed spite involved them, and the part they then played haunts them still. Surely they are now making open confession, telling us they sinned, sinned because they could not help themselves : now they demand our absolution and the absolution of their fallen foes. So in extenuation, they tell us of the hell that was made for them by their foes to justify the hell they made themselves.

Edlef Klippen, the German, Wilfred Saint Mande, the Englishman, aware equally of the futility of war, horrified by it and mentally dissociating themselves from it, yet ranged themselves against each other ; and it is clear from their respective accounts that the War for each was an opportunity to display supreme virtues of endurance, heroism, devotion, such as no other human activity could call forth in just those forms. If you want the picture of a hero, Mr. Saint Mande's book will give it you, twopence coloured. War, Wine and Women is a very long book, and much of its length is irrelevant detail such as no practised writer would have permitted himself. But many passages are written with a verve that few practised writers could imitate. As a record of personal experience, the book's authenticity is open to doubt. The book is about the author, of course, for that is what interests him most deeply, and it is understandable in a man who survived so often and so precariously from one slaughtered company to another. Also it puts on record how another individual endured the War, and with more candour than most, the joy he had in it. The charnel house is no longer part of our lives, the skeleton does not face us at every turn, but for a while, here and in this book, it is brought very close. An unusual feature of this book is the photographic realism of the love episodes, too flat almost, yet very convincing, with the author by contrast shining forth in full martial panoply, his women, where they always have been for the warrior, despite the author's seeming protestations to the contrary, drab, effaced and very much in the background. Another unusual and some- what gruesome trait in the author is his need to identify himself with the-men whose throats he slit, rifling the letters from their pockets and giving us the contents. Very touching they are, and they make us feel, as few things could, the futility of war. Not content to kill in effigy merely, he seems to have wanted to take full responsibility for his act.

With Higher Command we come to a book altogether more literary. The descriptions of the bombardments are terrific. At times it seems one of Mr. Saint Mande's battles is being described from the opposite trenches. The emotions, reac- tions, terrors are almost identical. This hero, too, cannot reconcile the War with anything he has learnt, but he, too, endures it. The official pronouncements emanating from the Higher Command of all the armies in the field make sorry reading to-day. Truly there is no animal so credulous as HUM A Martial Medley deals with a number of aspects of war. Most seem to be competently written, but in a too conscious literary style. One, however, " The Long Way's End," by E. C. Patterson, puts on record conditions in the Prussian camps of Wurtemberg, and in the coal mines of Golpa, and makes a living, affecting narrative of the brutality of man to man.

Time Stood Still is the record of a so-called enemy " alien," an art student on a visit to England when war broke out. The writer, like a number of barbers, restaurateurs, city men of all ages and conditions, was interned, as were a good many such dangerous persons, first at Knockaloe, then at Wakefield. It is a valuable record of a spiritual transformation brought about by solitude and enforced contact with very dissimilar types ; and of the psychological and physical changes due to poor food and close confinement. Because of his situation, this author's book is introspective as the others are not. It is a dignified book, like all these accounts of men swept into something which altogether dwarfed them, but from which, in varying degrees and significances, they drew some spiritual sustenance.