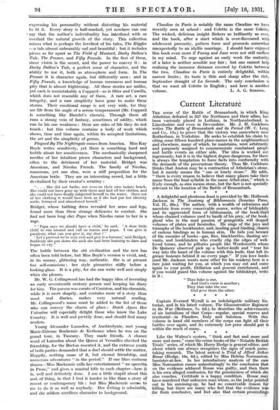 Tau scene of the Battle of Brunanburh, in which King Athelstait defeated in 937 the Northmen and their allies, has been variously placed in Lothian, in Northumberland, in Lincolnshire and even in Devonshire. Mr. J. H. Cockburn writes The Battle of Brunanburh and its Period (W. C. Leng and Co. 15s.) to prove that the victory was somewhere near Rotherham, in Yorkshire. He seeks to establish his claim by citing some fifteen hundred place-names in the neighbourhood and elsewhere, many of which, he maintains, were arbitrarily and purposely assigned to commemorate combatant people and battle events on either side. The idea is worked out ingeniously, but it is in the highest degree dangerous, for there is always the temptation to force facts into conformity with the demands of the procrustean theory. Thus Mr. Cockburn thinks that Anston may be a contraction of Athelstan's stone, but it merely means the " one or lonely stone." He adds, " there is every reason to believe that many places take their name from the final syllable in the name Athel-stan," which is likely enough, as scan means stone, but the •fact is not specially relevant to the location of the Battle of Brunanburh.