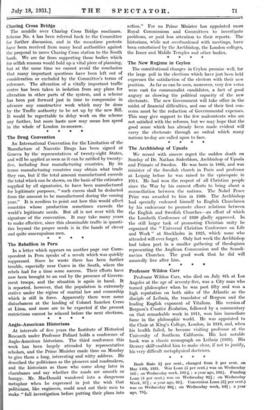 Page 3, 18 July 1931 — The constitutional changes in Ceylon promise well, for the large
Close

The constitutional changes in Ceylon promise well, for the large

poll in the elections which have just been held expresses the satisfaction of the electors with their new position. As far as can be seen, moreover, very few votes were cast for communalist candidates, a fact of good augury as showing the political capacity of the new electorate. The new Government will take office in the midst of financial difficulties, and one of their first con- cerns must be the reduction of Governmental expenses. This may give support to the few malcontents who are not satisfied with the reforms, but we may hope that the good sense which has already been made evident will carry the electorate through an ordeal which many nations to-day are called upon to face. * * *