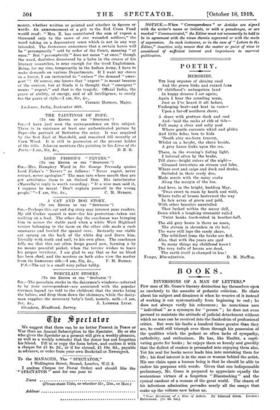 [To THE EDITOR OF THE " SPECTATOR.") Humpliry Ward in Sir George Tressady quotes Lord Fisher's " Nevers " as follows: " Never regret, never retract, never apologize." The man into whose mouth they are put attributes them to an Oxford Don. His interlocutor (Marcella's) reply is worth recording : " If a wise man said it, I suppose he meant ` Don't explain yourself to the wrong people.' "—I am, Sir, he., C. M. HUDSON.