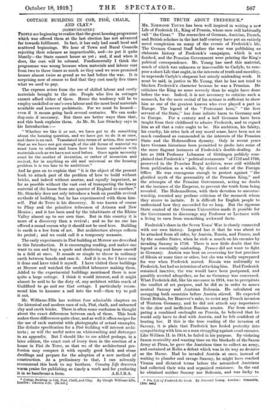 are beginning to realize that the great housing programme which was offered them at the last election has, not advanced far towards fulfilment. In fact, it has only had small local and scattered beginnings. We hear of Town and Rural Councils rejecting their schemes as impracticable, and—to put it quite bluntly—the State cannot house as yet ; and, if and when it does, the cost will be colossal. Fundamentally I think the programme was wrong because when materials and labour cost from two to three times as much as they used we were promised houses almost twice as grand as we had before the war. It is surprising now of course to find that they cost nearly five times what we used to pay.

The expense arises from the use of skilled labour and costly materials brought to the site. People who live in cottages cannot afford either of these. Hence the tendency will be to employ unskilled or one's own labour and the most local materials available and however prehistoric. For we must be housed— even if it means going back several centuries. We can make dug-outs if necessary. But there are better ways than that, and this book explains them. As Mr. St. Loe Strachey says in his Introduction :—

" Whether we like it or not, we have got to do something about the housing question, and we have got to do it at once, and there is an end. Translated into terms of action, this means that as we have not got enough of the old forms of material we must turn to others and learn how to house ourselves with materials such as we have not used before. Once again necessity must be the mother of invention, or rather of invention and revival, for in anything so old and universal as the housing problem it is too late to be ambitious."

And he goes on to explain that " it is the object of the present book to attack part of the problem of how to build without brickS, and indeed without mortar, and equally important, as far as possible without the vast cost of transporting the heavy material of the house from one quarter of England to another." Mr. Strachey does not only introduce a book on possible revived methods of building, but he has experimented with them himself. Pise de Terra is his discovery. It was known of course to Pliny and the primitive tribesmen of Arizona and New Mexico ; and it has been used by the inhabitants of the Rhone Valley almost up to our own time. But in this country it is more of a discovery than a revival ; and so far no one has offered a sound reason why it should not be used here. Building in earth is a low form of art. But architecture always reflects its period ; and we could call it a temporary measure.

The early experiments in Pise building at Morrow are described in this Introduction. It is encouraging reading, and makes one want to run and buy a spade and shuttering and house oneself in a field at once. It sounds so simple to throw in ordinary earth between boards and ram it. And it is so, for I have seen it done and have tried it myself. I have visited these buildings at Merrow and watched the unskilled labourers making them. Added to the experimental buildings mentioned there is now quite a large cottage. I think it would interest, and it might almost be said to be the duty of, any architect within reach of Guildford to go and see that cottage. I particularly recommend him to hammer a nail into the wall—then try to pull it out.

Mr. Williams-Ellis has written four admirable chapters on the historical and modern uses of cob, Pis& chalk, and unburned slay and earth bricks. There is often some confusion in thought about the exact differences between each of these. This book makes those differences quite clear, and as well it offers recipes for the use of each material with photographs of actual examples. The definite specification for a Pise building will interest architects ; so will the useful notes on whitewashing and distemper in an appendix. But I should like to see added perhaps, in a later edition, the exact cost of every item in the erection of a house in Pise de Terre, so that we of the architectural profession may compare it with equally good brick and stone dwellings and prepare for the adoption of a new method of construction. As a preliminary to that, I can solemnly recommend this book to my brothers. Country Life deserves warm praise for publishing so timely a work and for producing it in so handsome a form. A.R.T.B.A.