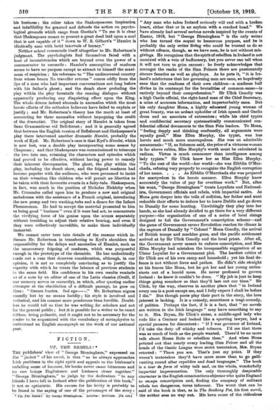 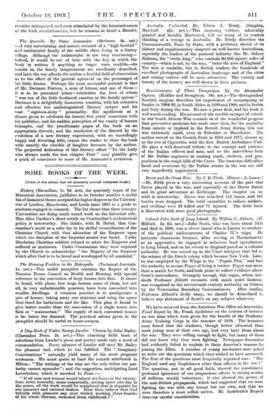 THE publishers' view of " George Birmingham," expressed on the " jacket " of his novel, is that " as he always approaches Irish problems in the right spirit and appeals to the Irishman's unfailing sense of humour, his books never cause bitterness and no one brings Englishmen and Irishmen closer together." " George Birmingham." to judge by the dedication " to any friends I have left in Ireland after the publication of this book," is not so optimistic. His excuse for his levity is probably to be found in the saying of one of the personages of the story : • Up. The Rebels! By Goorge Birminsbuna. Lon,!on Alecluen. Ere Leta "Any man who takes Ireland seriously will end with a broken heart, either that or in an asylum with a cracked head." We have already had several serious novels inspired by the events of Easter, 1918, but " George Birmingham " is the only writer who has turned the sequel to humorous purpose, and he is probably the only writer living who could be trusted to do so without offence, though, as we have seen, he is not without misgivings. He recognizes that the spirit of rebellion in Ireland is not unmixed with a vein of buffoonery, but you never can tell when it will not turn to grim earnest : he freely acknowledges that amongst the ranks of the Sinn Feiners there are passionately sincere fanatics as well as playboys. As he puts it, "it is Ireland's misfortune that her governing men are sane, so hopelessly sane that the madness of their own children—a madness half divine in its contempt for the brutalities of common-sensee—is entirely beyond their comprehension." Sir Mick Conolly was a high Castle official, the right-hand man of the Chief Secretary, a mine of accurate information, and imperturbably sane. But his only daughter Mona, a highly educated young woman of great beauty, was an ardent upholder of Irish speech and Gaelic dress and an associate of extremists ; while his chief typist and confidential secretary systematically communicated confidential official documents to the Sinn Fein leaders. To Mona, " feeling deeply and thinking confusedly, all arguments were equally good." Miss Ellen Murphy, the typist, was less heroio and much more unscrupulous. She was an admirable amanuensis: " If, as Solomon said, the price of a virtuous woman is far above rubies, Miss Murphy's worth must be calculated in radium. Virtue is much commoner than intelligence among lady typists." Sir Ulick knew her as Miss Ellen Murphy. " To the rest of the world—her world—she was Eibhlin O'Murchada, refusing very properly to recognize the English corruption of her name. . . . As Eibhlin O'Murohada she was prepared for martyrdom in the heroic manner. Ellen Murphy knew accurately the value of pay for overtime work." But, after his wont, "George Birmingham" treats Loyalists and Nationalists, Government officials and rebels, with impartial satire. As Mona gets deeper into the toils of sedition, her father and aunt redouble their efforts to induce her to leave Dublin and go down to Dunally for some hunting. Unwittingly they play into her hands, as she had already decided to go there for a very different purpose—the organization of one of a series of local risings designed to foil the Government's conscription scheme—and the game of Government versus Revolution reaches its climax in the capture of Dunally by " Colonel " Mona Conolly, the arrival of British troops and machine guns, and the pacific settlement arrived at by Sir Ulick Conolly and the local priest. After all, the Government never meant to enforce conscription, and Miss Ellen Murphy had mistaken the irresponsible suggestion of an Ulster Loyalist for a Government plot. The hardest critics of Sir Ulick are of his own camp and household ; yet his final defence is not without force and pathos. He didn't ride straight at his fences like Mona, but he got her and her young enthusiasts out of a horrid mess. He never professed to govern Ireland : he knew it couldn't be done. " My job is just to keep things going somehow so that they'll last out our time." Sir Ulick, by the way, observes in another place that " in Ireland every one is a poet except me, and I fully expect I shall be before I die." But though poets play their part in the story, the love interest is lacking. It is a comedy, sometimes a tragi-comody, of politics. Perhaps the fact, if it is a fact, that " no novels are written in the Irish language " may have something to say to it. Mrs. Bryan, Sir Ulick's sister, a middle-aged lady who rode like a Centaur and looked like a sporting lawyer, had a special panacea for discontent " If I was governor of Ireland, I'd take the duty off whisky and tobacco. Pd see that there was as much of both as the people wanted. There'd be no more talk about Home Rule or rebellion then." And when Mona pointed out that nearly every leading Sinn Feiner and all the heads of the Gaelic League were strict teetotalers, Mrs. Bryan retorted : " There you are. That's just my point. If they weren't teetotalers they'd have more sense than to go gallivanting round after republics and dead languages." The book is a tour de force of witty talk and, on the whole, wonderfully impartial impersonation. The only thoroughly despicable character is the English conscientious objector who quits England to escape conscription and, finding the company of militant rebels too dangerous, turns informer. The worst that can be said of the book is that, as in The Seething Pot, his first novel, the author sees no way out. His keen sense of the ridiculous

remains unimpaired, and even stimulated by the humourlessness of the Irish revolutionaries, but he remains at heart a Hamlet.

The Querrils. By Stacy Aumonier. (Methuen. 6s. net.) —A very entertaining and minute account of a "high-browed " and sentimental family of the middle class living in a Surrey village. Although the catastrophe is not very convincing— indeed, it would be out of tone with the key in which the book is written if anything so tragic were credible—its results on the family temperament aro excellently described, and later the war affords the author a fruitful field of observation as to the effect of the general upheaval on the personages of his little drama. Perhaps the moat successful portrait is that of Mr. Decimus Postern, a man of letters, and one of those— it is to be presumed minor—celebrities the love of whom " was one of the little feathered vanities in the family -quiver." Decimus is a delightfully humorous creation, with his extensive and effective but undistinguished literary output and his vast " eighteen-sixty " personality. His apotheosis at a dinner given to celebrate his twenty-five years' connexion with his publisher, and his sudden perception of the vanity of human triumphs, end the penultimate pages of the book on an appropriate discord; and the resolution of the discord by the evolution of a new literary experiment, with an exceedingly happy and diverting title, causes the reader to close the book with exactly the chuckle of laughter foreseen by the author. The projected dedication of this literary effort " To the Lady who always reads the last chapter First " may possibly give a prick of conscience to some of Mr. Aumonier's reviewers.