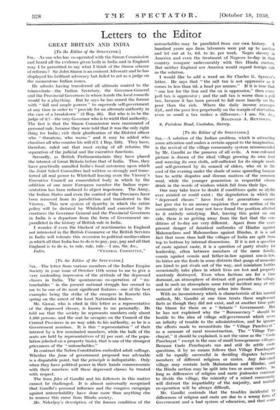 [To the Editor of the SPECTATOR.] Sin,—The letter from various

members of the Indian Empire Society in your issue of October 11th seems to me to give a very misleading impression of the attitude of the depressed classes in India. The spontaneous co-operation of " un- touchables " in the present national struggle has seemed to me to be one of its most significant features—one of the best examples being the strike of the sweepers in Karachi this spring on the arrest of the local Nationalist leaders.

Mr. Gawai, who is cited in this letter as a representative of the depressed 'classes, is known to me personally. He told nie that the society he represents numbers only about 1,500 persons, and the seat he occupies on the Council of the Central Provinces in no way adds to his authority, as he is a Government nominee. It is this " representation " of their interest by a few nominated members, while the bulk of the seats are held by representatives of 2t per cent. of the popu- lation (elected on a property basis), that is one of the strongest grievances of the " untouchables."

In contrast the Nehru Constitution embodied adult suffrage. Whether the form of government proposed was advisable is a disputable point, but the principle is indisputable. Only when they have political power in their hands commensurate with their numbers will these depressed classes be treated with respect.

The bona fides of Gandhi and his followers in this matter cannot be challenged. It is almost universally recognized that Gandhi's personal influence and the congress campaign against untouchability have done more than anything else to remove this curse from Hindu society. • Mr. Nekaljoy's description of the former condition of the

untouchables may be paralleled from our own history. A hundred years ago farm labourers were put up to auction and let out at is. 6d. to 25. per week. Negro slavery in America and even the treatment of Negroes to-day in that country compare unfavourably with this Hindu custom. But neither England nor America would regard foreign rule as the solution.

I would like to add a word on Sir Charles G. Spencer's letter. He says that " the salt tax is not oppressive as it comes to less than 6d. a head per annum." If it is true that " one law for the lion and the ox is oppression," then every poll tax is oppressive ; and the salt tax is worse than a poll tax, because it has been proved to fall more heavily on the poor than the rich. Where the daily income averages 31d., and the poor live perpetually on the margin of starvation even so small a tax makes a difference.—I am, Sir, Se., REGINALD A. REvxorms. 8, Fairdene Road, Coulsdon, Surrey.