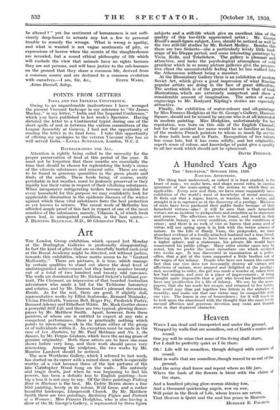 INDIA AND THE IMPERIAL CONFERENCE.

Owing to an unpardonable inadvertence I have wronged the present Viscount Inchcape in my reference to "Sir James Mackay," in my letter, " India and the Imperial Conference," which you have published in last week's Spectator. Having dictated the letter to a Continental typist during one of the short spells of rest in between the various committees of the League Assembly at Geneva, I had not the opportunity of reading the letter in its final form. I take this opportunity of offering my apologies to the veteran Viscount who has so well served India.—LANKA SUNDARAM, London, W.C.B.

Attention is rightly being called to the necessity for the proper preservation of food at this period of the year. It must not be forgotten that these months are essentially the time that should be chosen for replenishing the body's stores of the vitamin substances and mineral salts. These are only to be found in generous quantities in the green plants and fruits of the earth. These foods being, of course, easily perishable in hot weather, must be jealously preserved or they rapidly lose their value in respect of their vitalizing substances. When inexpensive refrigerating larders become available for every household for this purpose we may confidently look for appreciable diminution in the epidemic diseases of the winter against which these vital substances form the best protection as yet known to science. The recent work of Mellanby has afforded ample proof of this fact in respect of one of the most sensitive of the substances, namely, Vitamin A, of which fresh green leaf, in unimpaired condition, is the best source.— J. HENNING BELFII.I.GE, M.D., 90 Gloucester Place, W. 1.